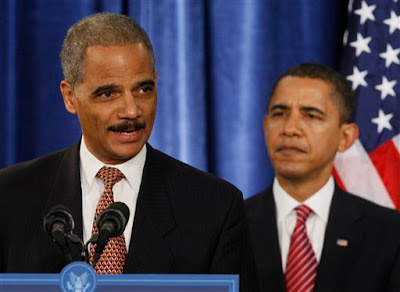 
The 14th century philosopher William of Occam gained fame for what became known as "Occam's Razor," an axiom often stated as, "The simplest explanation is usually the best."  The original Latin -- "Pluralitas non est ponenda sine necessitate" -- adds some nuance. This translates roughly as "One ought not posit multiple variables unnecessarily.”


Therein lies the explanation for Attorney General Eric Holder’s scandals, “Fast and Furious”, seizing the Associated Press phone records of editors and reporters, and the assertion that Fox News reporter, Jim Rosen, was a criminal “co-conspirator” in the leak of information from a State Department employee. Holder is no stranger to scandals or behavior that has drawn criticism.


He is and long has been little more than a political operative.


The simplest explanation for Holder’s problems can be found in an examination of his long career in public service. He is a liberal ideologue, not unlike the President. Beyond that, he has displayed an extraordinary indifference to the law if it conflicted with fulfilling presidential agendas and policies.


The most famous Attorney General in the modern era was Nixon’s John Mitchell who served nineteen months in jail (1977-1979) as the result of his participation in the Watergate scandal. In an earlier scandal known as “Teapot Dome” during the Harding administration, Attorney General Albert Hall was found guilty of bribery in 1929, fined $100,000, and sentenced to a year in prison. He would become the first cabinet member to go to prison. So there is precedent as Congress continues its investigations into the actions and assertions of Eric Holder.


It would be easy to write off Holder’s problems to simple incompetence, but he has held a number of positions in which he was judged to have performed well. His rise in government has a lot to do with his personal ambition and, while politics has a lot to do with ambition, it has its limits when it comes to adhering to the law. In Holder’s case, he has displayed a lack of memory, a too convenient alibi, for many of the decisions and actions he has taken over the years. Some call it perjury.


I first became aware of Holder in 2000 when he was the Deputy Attorney General under President Clinton and supervised the seizure of Elian Gonzalez, a six-year-old Cuban refugee whose mother had drowned in an attempt to flee Cuba for freedom in the U.S. Elian was seized at gunpoint from the Miami home of his uncle when Fidel Castro demanded his return.

On April 23, 2000 Fox News’ former judge Andrew Napolitano interviewed Holder, pointing out that he had not secured a court order to authorize the seizure. Holder said he did not need one, but Napolitano asked him “Then why did you ask the 11th Circuit Court of Appeals for such an order if you didn’t need one?” Holder even denied that the child was taken at gunpoint though there was a photograph of it.


Holder insisted the INS had the right to do this even though, on December 1, 1999, the INS had asserted that his uncle was the child’s legal custodian. Even the liberal attorney, Alan Dershowitz stated at the time that “They never made clear just what kind of warrant” it was and that “neither would it have been legal.”


Holder has had a long career in the law. He joined the Department of Justice straight out of Columbia University Law School in 1976. He is a graduate of Columbia University in 1973. He worked his way up the ranks, becoming an Associate Judge on the Superior Court of the District of Columbia in 1988 and remained a judge until Bill Clinton appointed him a U.S. District Attorney for the District of Columbia (1993-1997).
He then served as Deputy Attorney General under Janet Reno from 1997 until 2001 when Clinton left office. As such he was there during the Waco, Texas debacle when a religious compound was burned to the ground when besieged by government authorities, killing many of its members. In the final days of the Clinton years, controversy occurred when Holder signed off on the last minute pardon of fugitive financier Marc Rich, saying he was “neutral, leaning toward favorable.”


Holder has always been “favorable” toward anything any president wanted to do and therein lies the explanation for a succession of scandals under Obama, the most famous of which—as yet shrouded from inquiry by an executive order—known as “Fast and Furious”; a deadly program carried out by the Bureau of Alcohol, Firearms, Tobacco and Explosives (ATF), an agency of the Department of Justice, in which numerous guns were purchased in the U.S. and allowed to be “walked” into Mexico where they ended up in the hands of drug cartels. Some of those weapons were used to kill thousands of Mexicans as well as two employees of the U.S. consulate and a U.S. Border Patrol officer.


In May 2011, Holder told Congress he “became aware” of Fast and Furious only “a few weeks ago.” The Justice Department released five heavily censored memos from July and August 2010 addressed to Holder and calling the program by name. Congress found him in contempt for his testimony.


When you are so wedded to ideology—one that matches President Obama’s—that you cannot grasp that recommending that the planner of 9/11, Khalid Sheikh Mohammed, should be tried in a civil court in New York City, was an horrendous idea, it is fair to call Holder’s judgment into question. No enemy combatant has ever been tried in a civilian court in the history of the nation, let along extended the protections in the Constitution.


After witnessing far too many memory lapses to “explain” why he can’t remember receiving or signing documents brought to his attention, it is fair to ask why he continues to hold the office of Attorney General.


The seizure of journalist’s phone records, including the parents of Fox News reporter Jim Rosen, has momentarily aroused concerns in the mainstream media, but it is so much in the tank for Obama that it is likely both Holder and Obama will try to wait out the latest scandals in the belief that the attention span of many Americans is so short this too shall pass.


Occam’s razor suggests that the simple answer is that what is occurring in the White House and throughout the Obama administration is complete and thorough-going incompetence combined with a readiness to ignore the law which they took an oath to uphold.


And it is a sad day for America when its Attorney General must be brought to justice.

" And it is a sad day for America when its Attorney General must be brought to justice...."

My thoughts exactly. It's not just a sad day though ... it's a scary day, because if the Atty General cannot be trusted to serve the public interest and administer the law fairly and impartially, where does that leave us? One step away from totalitarian rule if you ask me ...

When things get really bad, and bad they will, blood will run. Payback will visit the Holders of the country probably by their former body guards.

The lawlessness of the American government as epitomized by Holder will not end well. Colossal societal mistakes such as this one playing out now usual end in blood being shed. Once the critical amount of citizens lose trust in government the society will fracture and during that stormy episode blame will come to many of the Holders who will be remembered by those suffering as being responsible for their plight. So often in upheavals such as is imminent here the guardians of the high and mighty end up as agents their destruction.