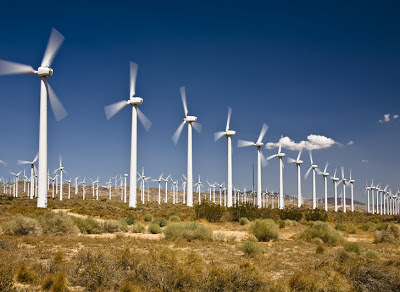 
Can you love nature when it is covered with wind turbines? Or solar panels?


Putting aside the scientific, engineering, and economic idiocy behind the use of wind turbines and solar panels to generate less than three percent of the electricity used nationwide—or that, if the wind is not blowing and the sun not shining, electrical energy must be supplied by back-up traditional coal, natural gas, nuclear and hydroelectric plants.


My personal objection to wind power is the sheer ugliness of these devices. The notion of covering hillsides and plains with them is an offence to the land—to the nature Greens profess to love—and to the many thousands of birds they slaughter every year.


I can’t prove it, but I suspect that the only reason we have any wind energy, i.e. windmills and solar panels, anywhere in the U.S. is a combination of the huge propaganda power of the Greens, bribery, the stupidity and chicanery of politicians, and the gullibility of people who actually believe that wind—which does not blow all the time—is a rational source of power generation.


Suffice to say, the wind power industry would not exist without state government mandates for its use, federal tax credits, and the deafening silence of environmentalists who want to save every species on Earth with the exception of the wind turbine's slaughter of a million of eagles, hawks, geese, bats, and other flying creatures every year.


The cliché is that great minds think alike and recently there have been a spate of editorials and commentaries, all coincidently written by colleagues of mine. One of them is Dr. Jay Lehr, the science director of The Heartland Institute, for which I am a policy advisor along with others with far more impressive credentials than my own as a longtime science and business writer. On June 17, The Wall Street Journal published Dr. Lehr’s commentary, “The Rationale for Wind Power Won’t Fly.”


“After decades of federal subsidies—almost $24 billion according to a recent estimate by former U.S. Senator Phil Gramm—nowhere in the United States, or anywhere else, has an array of wind turbines replaced a single conventional power plant.” Dr. Lehr inferentially raises the question of why any nation would spend that kind of money without receiving sufficient and equivalent electrical power. It is a very good question.


As Dr. Lehr noted, “It’s known to everybody in the industry that a wind turbine will generate electricity 30% of the time—but it’s impossible to predict when that time will be.” There are about 24,000 of these hideous machines according to the American Wind Energy Association and, given their lobbying, that number could double in the next decade. They will still not produce sufficient electricity—let alone predictable and constant electricity—for a small city.


Neither wind nor solar power will provide sufficient electrical energy. This begs the question why they even exist.


The short answer is that wind and solar have been sold to the public (which pays more for the electricity they produce) as not producing “greenhouse gas emissions” that are blamed for a global warming which is not happening, but the main gas, carbon dioxide, is vital to all life on Earth, being the “food” for all plant life, much of which we consume as crops such as wheat, corn, and rice. As a demonstration of the idiocy and hypocrisy of environmentalists, huge quantities of corn are, by government mandate, converted to ethanol—moonshine—that must be added to gasoline.


Another colleague, Rich Kozlovich, has a commentary in circulation that asks why the “Precautionary Principle” that is beloved by the Greens is not applied to wind turbines. Rich quoted another colleague of mine, CFACT’s Paul Driessen, “The Precautionary Principle insists that no new technology should be permitted until it can be shown that it will pose no threat to human health or the environment.” If fully applied, humanity would be denied another medication, chemical, or technological innovation.


“The hard reality is that the green movement does not care about facts, wildlife or humans,” says Kozlovich, “and logical consistency is totally alien to them…Green elites ‘know’ what is best for all of humanity,”


I doubt he will get the plaudits and recognition he deserves, but Dr. John Droz, Jr., a physicist, has devoted his knowledge to providing the best collection of scientific date available regarding the futility and stupidity of wind power. Dr. Droz has a website where you can learn the FACTS about wind power or you can Google his name to find his many excellent articles on the subject.


I have cited some of those facts, as has Dr. Lehr, Paul Driessen, and Rich Kozlovich, but it does not take an advanced degree in physics or any other science to grasp why constructing thousands of wind turbines to produce a miniscule amount of electricity has been one of the most idiotic enterprises to emerge from the vast global warming/climate change hoax.


Instead, we live in a nation whose president insists that climate change is the greatest threat to mankind and who is devoting the powers of government to shut down coal-fired plants, deter exploration and extraction of energy reserves on lands owned by the federal government, delaying the construction of a new pipeline, and the construction of new nuclear facilities. One of his suggestions for power generation is algae, pond scum.

for more than five years now, I have been writing about electrical power generation in all its forms across at the site I contribute at, and renewable power has been one of the areas I have concentrated on, explaining how it fails so utterly to deliver the electrical power that is required absolutely to keep the Country going.

Since I started in March of 2008, Wind power especially has ramped up its construction to a point where, now, the total Nameplate Installed Capacity is close to 62,000MW. (with a further 10,000MW still in the construction process)

So, then, with that in mind, how many of those large scale coal fired power plants have closed down in those 5 years and four months?

Not one of them has closed down.

In fact, no plant greater than 750MW has closed in that time, and none are scheduled to be closed down in the short term.

So then, how much power do these 45,000 wind towers deliver to Grids across the U.S. in the course of a year, considering they have the same Capacity as 31 large scale coal fired plants?

They deliver the same power as 10 of those large scale coal fired plants deliver.

However, while a large scale coal fired plant can deliver its power on a 24/7/365 basis, these 45,000 towers barely average an equivalent maximum power delivery for 6 hours a day.

Some days they deliver more, and some less.

These huge towers will never be able to do what large scale coal fired power can already achieve, and what has happened over the last 5+ years just goes to prove that.

You can call them bird and bat killers. you can attribute adverse health indications to them, they can be a blot on the landscape, and each of these on their own carries its own importance.

However, far and away the greatest cross against them is their utter failure to deliver power on a regular and constant basis, something they will never achieve.

Thank you, Tony, for sharing the FACTS with us. An entire population of the US needs to learn such things.

Back in 2008, a farmer in Knox Co., OH, installed a rather large wind turbine on his property, which happened to be nearly the highest point in the County and the best site in the County for a turbine.

For the first few years of its operation, the turbine's capacity factor appeared to be around 10%. The turbine was supposedly designed and built to withstand winds up to 90 mph. However, a year ago one of the blades broke off. The turbine has not been repaired and stands as a monument to stupidity.

You know, I have seen all this windmill stuff here for a long time and I have wanted to weigh in but haven't for fear of disclosing the truth...

Those are not electricity generators, they are giant fans..

It gets so hot here in Texas we turn em on to keep the cows cool and locally they are known as *COW COOLERS*..

Now you know the rest of the story...

Thanks, Fred, for clearing up that mystery.

You've nailed it about subsidies. Wind farms are a Robin Hood tax in reverse - a way of redistributing income from poorer people to the super-rich.