Gas Prices Should be a Lot Lower


In the past whenever gas prices began to climb, whoever was president usually got the blame for it, but there never was anything he could do about it.  The price at the pump was and is dependent on global factors. What can, however, be said about Barack Obama is that he has led the most anti-energy administration in the history of the nation.

A nation’s economic stability and growth depends on affordable, abundant energy, especially hydrocarbon energy in the form of coal, oil, and natural gas. In the U.S. so-called “renewable” energy—wind and solar--has been a huge, costly bust as billions in loans during Obama’s first term were lost as one “green energy” company after another went belly up. At the same time, a war on coal closed mines and shut down plants using it to generate electricity. Look for it to continue.


Production of coal, oil, and natural gas on federal lands is now the lowest in ten years according to data collected by the Energy Information Agency (EIA). It was four percent lower in fiscal years 2012 than the previous year. By contrast, fossil fuel production on state and privately owned lands rose twenty-six percent over the past decade.


Without soliciting public comment, the White House recently raised its estimate of the “social cost of carbon” (SCC), an estimate of the alleged economic damages associated with increasing carbon emissions.  Carbon dioxide (CO2) is blamed for a global warming that is not happening. The growth of all vegetation on Earth is dependent on Co2 and, despite an increase in CO2, the Earth slipped into a cooling cycle seventeen years ago. There is NO connection between CO2 and the climate.


The Institute for Energy Research points out that raising the SCC “could impose hundreds of billions of dollars in compliance costs on energy-intensive businesses and American consumers alike.” If you wonder why the economy seems unable to climb out of its slump, this is just one example of an administration bent to using bogus science to justify its war on consumers. 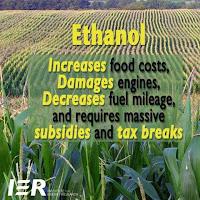 At the gas pump, that war includes a law that requires U.S. refiners to blend 12.8 billion gallons of ethanol—made from corn—into the fuel they sell to domestic consumers. Ethanol actually reduces the mileage per gallon and damages automobile engines.


Refiners do not need all the ethanol the government forces them to purchase. They, in turn, must purchase Renewable Identification Numbers (RINs) whose cost has jumped from seven cents a gallon at the beginning of the year to more than a dollar by March. The cost is passed along to consumers. Ethanol actually reduces the mileage per gallon and damages automobile engines.


Summertime is traditionally a time when Americans drive more, but thanks to the economy which did not respond to the “stimulus” and bailouts during Obama’s first term, they are driving less. Four and a half years after he took office, Obama continues to drive the economy into a ditch.


On June 13, The Wall Street Journal’s page one lead article was “U.S. Oil Notches Record Growth.” Under the normal laws of supply and demand, the price of gas at the pump should be declining. “U.S. crude-oil production grew by more than one million barrels a day last year, the largest increase in the world and the largest in U.S. history.”


You can thank “fracking”, a tested, safe technology—hydraulic fracturing—for the increase in oil and natural gas production. It is, of course, a target of major environmental organizations such as the Sierra Club and Friends of the Earth. After all, who wants affordable, abundant energy?


“Indeed,” reported the Wall Street Journal, “U.S. crude-oil production has raced ahead of new pipeline infrastructure to move it from oil fields to refineries.” In the meantime, “railroads move more crude around the country.” Obama’s delay of the Canadian Keystone XL pipeline is just another example of his anti-energy agenda. The pipeline would connect to Texas refineries and provide an estimated 20,000 construction jobs at a time when millions of Americans are out of work.


In March, Business Week reported that “For the first time since 1995, the U.S. will likely produce more oil than it imports. That’s great for the country’s trade balance, but the benefits of cheap domestic crude still haven’t shown up at the one place it matters most: the gas station…So far this year, gasoline prices have risen eleven percent nationwide, to $3.65 a gallon.”


“Without realizing it, U.S. drivers are competing for American-made gasoline with consumers in Latin America and Asia, where demand is rising.” Thus, the global marketplace for oil is keeping gas prices high and U.S. refineries shipped a record 3.2 million barrels a day of refined fuel this year!


Finally, on top of the Obama administration policies of denying access to drilling on federal land, you will continue to hear that Big Oil is making obscene profits and gauging customers at the pump. “At a time when oil companies are making more money than ever before, how can we justify giving them billions more in taxpayer subsidies every year?” Obama energy and environment adviser Heather Zichel recently asked.


What you are not being told, however, is that the oil and gas industry paid an effective tax rate of almost forty-five percent according to the American Petroleum Institute while the healthcare industry paid about thirty-five percent and pharmaceuticals paid around twenty-one percent. In addition to federal taxes, oil companies pay state and local taxes as well. The “tax loopholes” Greens complain about are available to all other manufacturing and mining companies.


Lying to the American public is the stock-in-trade of Green organizations and those directing the Obama administration’s anti-energy policies. When and if the obstacles to fossil fuel exploration and production are removed, the price of a gallon of gas will drop dramatically while, at the same time, the U.S. economy will gain from the sale of its fossil fuels around the world.

The stock market plunge may put a stop to some summertime travel, maybe... But we should have gas prices under a dollar a gallon...

We are sitting on more oil than all of OPEC.. We have more oil under the USA and Canada than all of our furry faced camel loving Arab friends..

So, WHY are we paying over $4 a gallon in some places? The EPA, the Greenies, Obama and his support of all things Arab/Muslim and the fact that at least 50% of all Americans are BRAIN DEAD to that information...

For Massachusetts citizens going to the polls on June 25 to vote for their U.S. Senator, please vote against Representative Ed Markey, a 37 year veteran of the House, Ranking Member of the House Natural Resources Committee. Markey, along with John Kerry, is one of the primary supporters of the failed hypothesis that human-cause caused CO2 is bad for the planet. Many science studies like the one at this link from American Geophysical Union show that more CO2 is good for the planet. Vote for Gabriel Gomez. http://www.agu.org/news/press/pr_archives/2013/2013-24.shtml

@Fred: How come you and I know this stuff and so many others do not? Too many are, as you say, brain dead.

@Bud: I'd move to Massachusetts just to vote against Markey. He is a weasal.

Check the value of a dollar since the Federal Reserve act was passed: >96% loss in purchasing power.

Check the level of taxation at all levels of American government since the Kensians, Progressives and Greens captured the political tiller increasingly since the 1930s.

Prices reflect the reality of 100 years of left wing drift.

All is OK as long as king Obama, queen Michelle and the princesses get to travel to Ireland and Africa at our expense. By the way, I can't afford to travel any further than an hour from home!