Who is Susan Rice?

This is an update of a March commentary on the subject of Susan Rice who has just been appointed the new National Security Advisor to the President.


Having lied on behalf of President Obama and former Secretary of State Hillary Clinton in the wake of the Benghazi scandal, U.S. Ambassador to the United Nations, Susan Rice has been rewarded with an appointment as the national security advisor to the President 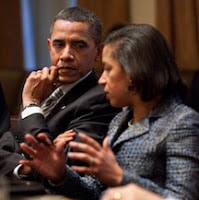 The obvious question is “What does Susan Rice know about national security?” though she did serve on President Clinton’s National Security Council. As the Assistant Secretary of State on the Africa desk when the Rwanda genocide occurred in 1994, both Clinton and she were missing in action. He later would say it was one of the biggest mistakes of his time in office.


Her area of expertise for many years has been Africa and, in that capacity, even The New York Times noted that in 1998 she celebrated a “new generation” of African leaders, many of whom turned out to be despots after having been rebel commanders.


One example The Times cited was Meles Zenawi, the late prime minister of Ethiopia who she eulogized in September as “brilliant” and “a son of Ethiopia and a father to its rebirth.” The Times noted that “Mr. Meles dismantled the rule of law, silenced political opponents and forged a single-party state.” Others whom Ambassador Rice found little to criticize were Isaias Afwerki of Eritrea, Paul Kagame of Rwanda and Yoweri K. Museveni of Uganda, all still in power.


Richard Grenell, who served as the spokesman for four U.S. ambassadors to the UN, wrote a scathing commentary which was published by Fox News in November 2012. Referring to the Benghazi attack and its aftermath, Grenell wrote “To veteran foreign policy observers, Rice’s performance that Sunday was one of many blunders over the last four years.”


“The case against Susan Rice has been building for years with little fanfare,” wrote Grenell. “Not surprising, the mainstream media reporters based at the UN have either ignored her mistakes or strategically covered them up.”


“”Rice’s diplomatic failures and silence in the face of outrageous UN antics have given the United States pathetic representation among the 193 members of the world body,” wrote Grenell. “UN members, not surprisingly, prefer a weak opponent. Rice is therefore popular with her colleagues. It may explain why she ignored Syria’s growing problems for months.” Grenell noted that “Rice didn’t even show up for the first two emergency Security Council meetings on the unfolding Arab Spring revolution last year” and “when she actually does show up, she is a miserable failure.”


Even more surprising, given her status as a diplomat, Ambassador Rice is widely described in the most unpleasant terms as abrasive and difficult to work with. Her mentors have been former Secretaries of State, Madeline Albright and Hillary Clinton, and if getting along with one’s boss is the key to success—and it is—her pending appointment to the National Security Council is proof of that. Even so, the White House has rolled out word of it to test the waters and see if she draws too much fire.


When she was being considered for Secretary of State—from which she withdrew—Benjamin H. Friedman, a research fellow in defense and homeland security at the libertarian Cato Institute, had some unkind thoughts about her, noting that “she has supported just about every proposed U.S. military intervention over the two decades. The president should nominate someone that occasionally opposes a war.” In retrospect, that would appear to be a fair judgment. Obama ran in 2008 opposing the war in Iraq, but also increased troop levels in Afghanistan in an effort to score a few points before setting in motion the U.S. withdrawal from there. Both wars have proved to be deeply unpopular.


The Rwanda experience no doubt increased Ambassador Rice’s preference for intervention, but the “lead from behind” intervention in Libya has not turned out well.


Indeed, little in the way of foreign policy in the Middle East has turned out well for either former President George W. Bush or his successor, Barack Obama. Moreover, Africa has become a new battleground for al Qaeda and a place where Western interests and workers are now attacked, kidnapped, and killed with increasing frequency.


Ambassador Rice’s rise through three administrations will likely culminate with her National Security Council appointment. It is doubtful that the new Secretary of State, John Kerry, or the new Secretary of Defense, Chuck Hagel, will turn out to be in any hurry to intervene anywhere for any reason. No doubt Ambassador Rice will put her finger in the wind and go in whatever direction it blows.