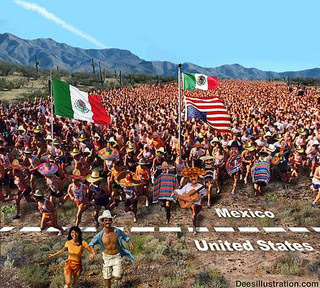 
If you liked Obamacare, you will love the proposed immigration “reform” bill which is all about the politics of the Left with no regard to the welfare of U.S. citizens by birth and naturalized citizens. Its final length remains unknown, but it was more than 1,500 pages by late April. The Senate takes up the bill this week.


The fact that Congress is revisiting the immigration issue is testimony to the estimated eleven million aliens illegally here due to law enforcement failures and limitations, and the political implications of granting them and eventually their families what is essentially instant citizenship, though fretted with a variety of fines and other factors.


The immigration bill gives the finger to those waiting, often for years, to go through the naturalization process and to the millions of Americans in need of employment during the worst economic times since the Great Depression.


As Alan Blinder, a former vice chairman of the Federal Reserve, wrote in the June 11 edition of The Wall Street Journal, “Mass joblessness is a shameful waste of human resources, a source of misery to millions, and now threatens to create an underclass of long-term unemployed whose skills are atrophying and whose hopes are vanishing.”


The “gang of eight” is composed of Senators of the far Left such as Chuck Schumer (D-NY), Dick Durbin (D-IL) and Bob Menendez (D-NJ), along with RINOs (Republicans in name only) such as John McCain (R-McCain) and Lindsey Graham (R-SC). Others include Marco Rubio (R-FL) who is either going to vote for it or against it depending on what day it is. Jeff Flake (R-AZ) and Michael Bennett (D-CO) complete the list.


You can ignore the promises of increased enforcement of laws to protect our southern border as these laws have been ignored for years. In January, a federal judge ruled that ten Immigration and Customs Enforcement (ICE) agents and officers had the right to challenge the so-called Morton Memo on prosecutorial discretion and the DREAM directive on deferred action that essentially ordered agents to violate federal laws for face adverse employment actions against them. The Memo prohibited ICE agents and officers from arresting or removing, i.e. deporting, any but the most violent criminal aliens; both initiatives of the Obama administration.


As NumbersUSA pointed out in May, the U.S. Senate’s S-744 bill “would give lifetime permits to 33 million more foreign citizens to complete with Americans for scare U.S. jobs” over the next decade when the 20 million Americans are currently seeking work. “That’s like putting the entire population of Canada in line for American jobs.”


The 33 million new work visas in the decade ahead would be almost as many as all immigrants who ever entered the U.S. in its history through to today.


The Center for Immigration Studies says that S-744 “assures the continuation of poverty for the American underclass for the foreseeable future, noting that in the first quarter of this year, the “broad unemployment rate for Americans without a high school degree has reached 30% and is close to 20% for citizens with only a high school education.”


“There are now 55.4 million working-age Americans who are not working.” 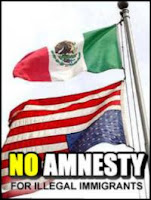 NumbersUSA provides another way of looking at S-744, pointing out that is that it is comparable to “re-creating ALL of the Top 20 cities in the United States, filling them entirely with foreign citizens and giving them lifetime work permits to compete with America’s struggling workers—and in just ten years’ time.”


In addition, the immigration “reform” bill includes two “slush funds” amounting to $150,000,000 that may be supplemented with additional taxpayer dollars for years to come. These funds would go to “public or private, non-profit organizations such as La Raza, Casa de Maryland, and the American Immigration lawyers Association! These and other organizations are devoted to helping illegal immigrants apply for legal status.


It gets worse if that is possible. The bill not only provides amnesty for illegal immigrants, but does so as well for their employers. As the Center for Immigration Studies points out, “Illegal aliens will be rewarded for breaking laws for which American citizens are routinely punished” such as the use of fraudulent Social Security cards, while imposing a $1,000 penalty that “in many cases would be waived. Then they would be issued a new Social Security number without any past bad credit or arrest records.”


The so-called immigration reform bill is the worst bill at the worst time. It is an invitation to millions more to illegally enter the United States.

Cue the theme music from "Jaws"...

Let's not forget that because these illegals who are becoming legal will initially be ineligible for things like Obamacare, they are actually more appealing to employers to hire because the employer won't have to cover them and they will be exempt from paying the fine/penalty for not covering them. Thus, these illegals will be preferred hires in many cases over American born citizens.