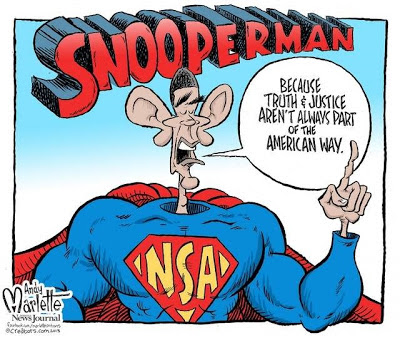 
While in the U.S. Army in the early 60s, I worked in the G-2 (intelligence) office of my battalion. I was surely no James Bond, but I did need a security clearance and quickly was granted one to be around documents marked “secret.” There are now thousands waiting for their security clearances and 4.8 million who already have one!


When Edward Snowden, an analyst for a national security contractor, decided to tell the world that the National Security Agency was actually gathering meta-data about all of our communications (and the rest of the world’s), I was among those who were not surprised. Whole books had been written about this practice before and since 9/11.  James Bamford had published “The Puzzle Palace” about the NSA way back in 1983!


The Justice Department has charged Snowden with conveying classified information to an unauthorized party, disclosing communications intelligence information, and theft of government property. The charges, each of which carries a potential 10-year prison term, were filed in federal court in Alexandria, Va. Well, at least that beats a firing squad.


Cliff Kincaid of Accuracy in Media thinks a lot of notable news media personalities have been duped. “Those who claimed NSA traitor Edward Snowden was a patriot or hero have egg all over their faces, as the former NSA contract worker has fled from China to Russia…”  I am inclined to agree.


It is a fact of life in this year of our Lord 2013 that information about you is so available that there are few if any of your purchases and preferences that are not known to every company with whom you do business. Your local supermarket knows the brand of cereal or shampoo you prefer. This is called “open source” information and it is not only gathered, but sold to anyone who wants it.


The information you voluntarily or unwittingly give to those with whom you do business as well as the information may post daily on your Facebook, Twitter and Linked-In accounts is all accessible and accessed.


The NSA has long had powers to scoop up scads of information about communications by, to, and from Americans. Its roots go back to the earliest days of the Cold War. Until recently revelations, we thought that the information we provide to the Internal Revenue Service was closely guarded and never to be used for political purposes, but in the Age of Obama, that illusion has been shattered.


In a recent Business Week article, Ashlee Vance reported “Less recognized is that, in this era of open-source software, the NSA gets direct access to the inventions of thousands of the smartest computer science minds on the planet for free.”


“It started,” said Vance,”with the founding of Google in 1998. The search engine giant needed to collect and analyze so much data that it couldn’t afford to buy systems from big-name tech companies. Instead, Google created its own open-source software program that ran across hundreds of thousands of computers. Yahoo!, Facebook, and Twitter have been even more aggressive about open-sourcing their underlying infrastructure.”


NSA and, indeed, the President, could have put a lot of the consternation to rest by coming out early and explaining what it does and the limitations under which it works. While it is most certainly a very secretive agency, there is much that is common knowledge about its mission.


In the post 9/11 era with a massive Homeland Security Agency charged with keeping us safe, it is a good, if not essential, idea to have a public discussion about the role of the Fourth Amendment protection of our privacy. Even though the Founders had no idea of modern communications they still believed that our privacy must be respected. Meanwhile, we live in a world of enormous electronic connectivity that is subject to surveillance.


Moreover, there are those who believe all the surveillance we are learning about is just the tip of the iceberg. There is widespread speculation that the Department of Homeland Security, in conjunction with the Department of Justice and other agencies has been working on a massive consolidation of power in the White House, preparing for the deliberate collapse of the U.S. dollar, and the chaos that would follow.


On June 19, the president of the Associated Press, Gary Pruitt, spoke at the National Press Club in Washington, D.C. saying that the DOJ seizure of journalist’s phone records has had “a chilling effect” on newsgathering, not just for the AP but other newsgathering organizations.  He described the collection of records affecting more than a hundred journalists was an “overbroad and sloppy fishing expedition” that failed to follow procedures on notification. If the intent was to impact legitimate news gathering, it was successful.


We still trust that law enforcement must secure a warrant to tap our phones, but the information about with whom we speak is routinely gathered, as it must, by telephone companies. It can be a useful tool to determine patterns, especially if they are between Americans and foreigners with bad intentions.


Inherent in all this data-gathering is the potential for its misuse—and worse—but that is true of much of what government does. The need for congressional oversight was never more paramount, but it comes at a time when the Congress is held in low esteem and sharply divided.


The greater present concern must be that we have a White House engaged in a plan to render the Constitution useless with a manufactured crisis to deliberately impose an authoritarian control over all of us.


We now living in an Orwellian era of super-dooper snoopers

I said on my blog before Obama was elected the first time in 2008 that if a majority of the American people were stupid enough to vote in a Communist, they were going to get Communism.

Well folks the Red train is coming into the station and it will be getting worse daily in this country - the political murders and the imprisonments have already begun - and that is just the start of a movement of 25 million innocent Americans to the concentration camps, or The Wall.

The upside is that I'm an old man with a heart condition and has not long to live.

But I do feel sorry for the young people who will have to suffer for the stupidity of their parents.