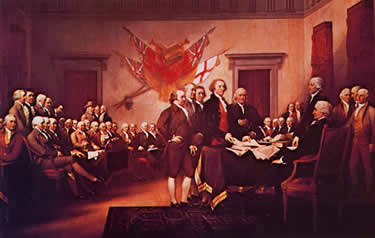 
We mark the days of our lives with birthdays, annual events that have a beginning and an end known only to God. As of October 9th I have 76 of them and that’s a lot, but history has a long perspective.


Two hundred and twenty-five years ago, the Constitution became effective in 1788, but barely 73 years later the Civil War began in 1861. A single man or woman’s life could have spanned the years from George Washington to Abraham Lincoln.


America is still a very young nation, but it is also one of the most extraordinary experiments in individual freedom and liberty that, unless its history is taught to contrast the control that other governments exercise over their citizens, there is the risk of not understanding or valuing the precious gift the Founding Fathers gave us and the millions who fought and died to protect and preserve it.


We are at risk of losing our freedom as our government expands in size and in the capability of tracking every aspect of our life from birth to death. As citizens, we are losing our privacy; something the Founders thought was very important and built into the Constitution.


Previous generations lived through periods in which relatively little change occurred, but my parents, both born shortly after the turn of the 20th century in 1901 and 1903, lived through an era of such rapid technological change that they could recall when there was no nationwide electrification, no airplanes, no radio, no television, no air conditioning, no fast food restaurant chains, and few cars or the highways to accommodate them. The first flight of the Wright brothers’ airplane was in 1903. It lasted a few seconds. The first Ford Model T automobile rolled off the line in 1908.


I have been reading a book, “1948: The Crossroads Year”, by James F. Nagle. At one point he noted that Americans who had been through the Great Depression put a lot more money into their savings accounts, $12 billion in 1948 as compared to $2.7 billion in 1939.


Change in America was so rapid after the end of World War Two in 1945 that it must have seemed extraordinary even in those times. Over a million young men came back from the war, got married, and produced a “baby boom.” The GI Bill enabled veterans to attend college and become professionals, engineers, and scientists in ways previous generations could not have dreamed. Others went into business and some were content to be blue collar workers. All, however, prospered in ways that led to better lives with all manner of household conveniences as suburbia blossomed.


Automobiles gave Americans mobility and television gave them a front seat to events from sports to politics. I measure my writer’s life as one that went from a manual typewriter to an electric one to a personal computer. If you had asked me in high school or even college what the Internet was, you would have gotten a blank stare. No one else knew either. It didn’t exist.


What I do know is that America has allowed itself to fall into the hands of a man who was virtually a complete cipher when he was elected. What information existed came from his two “memoirs” written before he became a junior Senator from Illinois. His election was a triumph of theatrics over substance, of vague rhetoric over serious policy, and one in which, as many voters admitted, they voted for him because he was black and wanted to show the world a black man could be elected President.


The world is now fully aware of that and, having taken his measure, has found him weak and untrustworthy. That makes the world a more dangerous place in many ways, but it threatens America with the huge debt he and his party literally doubled since he took office in 2009. The Democratic Party’s politicians are like drug addicts who cannot stop spending even in the face of the collapse of the programs they fought for so many years to enact. Social Security, Medicare, and Medicaid are on the verge of bankruptcy.


The Democrats treasured universal health insurance program—Obamacare—is a disaster filled with taxes and fines, a job killer, and one that kills the relationship between a physician and his patient by interposing a government of bureaucrats between them. And, yes, it includes death panels.


So, as I move into my 76th year I know it will be filled with considerable drama. 2014 will offer Americans midterm elections in which they will either surrender to socialist servitude or reverse the errors of the elections from 2008 to 2012.


It’s nice to look back, but better and more essential to look forward. History is seen in retrospect, but the future can only be seen through a fog of events, personalities, and propaganda. It demands close attention.


Celebrate Alan’s birthday with a donation to “Warning Signs”
Posted by Alan Caruba at 5:50 AM

Thank you. Your birthday was my late father's birthday too. Here's a wish for yours.

Psss... There's a Communist psychopath in the White House.

Obama isn't an American ...and?

You see where this is going?

Have a very blessed and HAPPY BIRTHDAY! TY for all you do, and pls keep up your great work!

Thank you Ron and Ulli.

And a most wonderful birthday I hope it was, sir. 'May you find yourself in interesting times' barely BEGINS to cover it, eh? Thank you for your superb essays each week and may you continue your work in robust health and good spirits. I especially liked this one, as I also remember gas at 25 cents/gallon and manual typewriters, among other things, what a 'ride'... Salut!

"Americans … will either surrender to socialist servitude or reverse the errors of the elections from '08 to '12."

As long as there are people in our midst who point out the complete news that our mainstream media refuses to report, we will never cave in to socialist servitude. It's just an extra burden when we otherwise have better things to do, but if our effort awakens an ever-increasing number of folks to the manner in which the 'new' Democrat party and the mainstream media is committing political suicide, then we will be rewarded with the exact election reversal you speak of.

Thank you, Russell. I hope and think you're right.