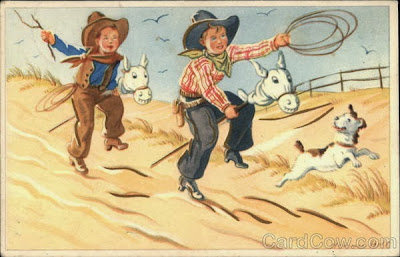 
When I was a youngster a prize possession of every boy was a set of toy cowboy six-shooters and, if you were especially blessed, a belt and holsters as well. In the pre-television days we all went to the Saturday matinees to see our heroes and to learn what it meant to be a man.

The ultimate icon was John Wayne and, for me, one of his finest films was his last, “The Shootist.” In that film after he instructed a boy on how to shoot, he responded to a question of why he had become known for his skills, “I won’t be wronged. I won’t be insulted. I won’t be laid a-hand on. I don’t do these things to other people and I require the same from them.” The fundamental morality of why he defended himself was self-explanatory.


My generation grew up with many cowboy heroes. By the time television arrived in the 1950s they became a staple of shows featuring Gene Autry, Roy Rogers, William Boyd as Hopalong Cassidy, and Clayton Moore as the Lone Ranger, a character from radio. Television gave us James Arness in Gunsmoke. There were others. I can’t think of a major Hollywood actor who did not portray a cowboy in films.


The Westerns were miniature morality plays. There were the good guys in white hats and the bad guys in black hats. What passes for films and television these days is often far removed from any moral content or intent. Much of it is just an excuse for exaggerated cartoonish violence.


This a long way of addressing a trend in our schools that is so wrong that it needs to be examined in a serious way. I am speaking of the increasing trend of suspending children for even saying the word “gun” or pointing a finger at a classmate in the fashion of a gun. It is essentially an insane, indefensible attack on Second Amendment rights to own a gun. The schools—teachers and administration—are engaging in their usual liberal indoctrination and, as usual taking it to the extreme.


Last month, in Osceola County, Florida, an 8-year-old was kicked out of class for playing cops with his friends at Harmony Community School and using his finger to similar a handgun. He was suspended for a day. He had never been in detention or suspended before…for pointing his finger!


Also in September, a seventh-grade student from Virginia Beach, Virginia, may be suspended for the rest of the school year for shooting an airsoft gun with a friend in the yard of his home while they waited for the bus to come. Khalid Carabello, 12, and his friend Aidan, were suspended for “possession, handling and use of a firearm.” It was a TOY. He was on the property of his own HOME.


I suggest this isn’t just a matter of two schools using bad judgment and failing to apply the most minimal common sense. This is a national trend and it has to stop. There has to be zero tolerance for “zero tolerance.”


Others agree and the first week of October was designated the National Week of Action Against School Pushout. There were campaigns from California to Florida, Minnesota to Massachusetts involving both youth and adult activists protesting “zero tolerance” policies and, as often as not, racial disparities in school discipline decisions. For example, the Minnesota Minority Education Project found that almost one in five black male students were suspended at least once in Minneapolis schools in 2012 as compared with one in 29 while male students. That’s a trend too.


The latest data from 2009-2010 shows that three million children in grades K-12 lost instruction time in the classroom because they were suspended; so much for school as a learning experience. Now, in addition to an epidemic of absurd psychological syndromes used to justify drugging school children to keep them docile, just arbitrarily suspending students because of some “zero tolerance” policy is the way too many “educators” respond.


Along with the campaign against any representation of guns, there has also been the inclination for school administrators to call the police instead of addressing the problem themselves. In Los Angeles on October 2nd the Youth Justice Coalition held a press conference and a march to protest police profiling of youth and to advocate for funding of community intervention workers and counselors instead of police in schools. This occurred so often that Gov. Brown signed legislation to encourage districts to limit the role of police when addressing conflicts.


This is a nationwide phenomenon. Ramiyah Robinson, a youth leader in North Carolina, said it best. “We demand that youth stop being criminalized and be recognized as individuals with needs.”


Kids grow up in a culture that reeks of violence in a world where violence fills the news of the day. If they want to play cowboy, to shoot airsoft guns, or in one case to own a “gun” that blows bubbles, they are acting out what surrounds them with no harm to anyone. That’s what all children do.

In the first half of the recent (current?) Season 7 of the UK's Dr. Who revival, even Dr. Who gets to pin on the Marshall badge and cavort around an 1880s Western town that's been visited by a crash-landed alien-Nazi doctor!

However, I am surprised at you Mr. Caruba, for not recognizing the inherent danger of guns that blow bubbles! What if a child had such a gun and used it while riding in public transportation? The bubble produced could float up front and burst in the bus driver's eye, thereby causing a head on collision with a full school bus of kindergartners, propelling it onto the train tracks in front of a fully loaded commuter train, killing everyone on board the three vehicles and causing the communter train to leap off to an adjacent track where a hundred-freight-car load of explosive toxic chemicals becomes derailed, with the chemicals mixing, burning, exploding, and wiping out AN ENTIRE CITY????

And then the President of course, taking the precautionary principle seriously, assumes it must have been caused by a chemical weapons attack from Syria, and launches nukes in retaliation. Israel, Iran, and Russia jump in of course, leading to full-scale, world-wide, all-out thermonuclear warfare -- proving, once and for all, that the AGW (Anthropogenic Global Warming) crowd was RIGHT in their predictions!

And yet you DEFEND these weapons of mass destruction?

Hopeful MJM was punning, but then again who knows.

Country, see my "About the Author" background at http://TobakkoNacht.com and I think you'll have an idea where I was coming from...