Too Much Illegal Immigration 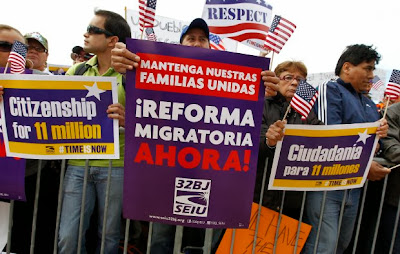 
Like many members of my generation, I would not be an American if my Italian and Russian grandparents had not got on the boat and came here. We are fond of calling America “a nation of immigrants”, but what happens when there are too many immigrants, many of whom are here illegally? And that is the problem that has defied a solution since the last big amnesty in 1986.


As Texas Governor Rick Perry said in his book 'Fed Up', “We have already been burned once by false promises of border security in exchange for tying security to other aspects of the immigration debate. President Reagan, in 1986, signed the Immigration Reform and Control Act, which legalized close to 3 million undocumented immigrants.”


“The law was supposed to be a comprehensive solution with provisions intended to clamp down on border security. These provisions were never enforced, and the subsequent explosion in illegal crossings has resulted in some eleven million illegal aliens living in the United States today.”


Amnesty was an issue in the 2012 elections and it will be an issue in 2014 so long the “Border Security, Economic Opportunity, and Immigration Modernization Act”,   S.744 awaits a vote. It is a very bad law for a number of reasons. First among them is the fact that there are the millions of aliens who are here illegally, but who cost natural-born and naturalized Americans billions.


At a time of high unemployment, American taxpayers shell out hundreds of billions as the result of illegal immigration in the form of:


And these same illegal aliens send billions home in remittances to their countries of origin.

I thought about this as I watched the news coverage of a gathering on the National Mall of advocates of S.744, rallying for its passage.

At the time, the Mall was closed to American citizens, including veterans, because of the government shutdown. That did not stop the “Camino Americano March for Dignity and Respect” from gaining permission to rally. Minority Leader Nancy Pelosi showed up to lend support along with Democrat and Republican Congressional Representatives of Latino heritage.


The Democrats know that, if they issue a form of instant citizenship to illegal aliens, most of whom are Latino, they will have a loyal voting bloc that will give them control of Congress and the White House for decades to come. They don’t really care what impact the expansion of already over-extended entitlement and welfare programs will have on the economy.


Steven A. Camarota, Director of Research of the Center for Immigration Studies, an independent, non-partisan, non-profit research organization, recently addressed the impact of S.744 in an analysis titled “How Many New Voters Would S.744 Create?”


Here are some of his findings:


# Based on the Congressional Budget Office (CBO) analysis of S.744, we project that the bill will add 4.6 million new potential voters above the number added by the current level of legal immigration by 2024. The bill would add 9.5 million potential voters by 2028 and 17.3 million by 2036.


# Of the new potential voters S.744 would create by 2036, slightly more than one-third would be a result of the bill’s amnesty provisions based on CBO projections, the rest are due to the bill’s large increases in future legal immigration.


# Combined, the current level of immigration plus the additions from S.744 would create nearly 10 million potential voting-age citizens by 2024, and more than 32 million by 2036.


# These projections are only for potential immigrant voters, not their U.S.-born children. The projections take into account deaths, return-migration, and residency requirements to naturalize. We do not estimate the share that will actually naturalize and vote once eligible to do so.


Camarota’s analysis adds up to 17 million potential voters within 25 years.


The United States of America is broke and both parties that have held the White House have contributed to the debt, although it is a fact that President Obama has literally doubled it since taking office in 2009. Entitlement programs such as Social Security, Medicare and Medicaid, will have to be reformed if they are to continue. In their present form they are financially unsustainable.


Now add in an amnesty for millions of illegal aliens and their children, just because they decided to jump to the front of the line instead of seeking citizenship as so many others have. Either we have borders or we don’t.

Alan, I have one solution to the problem, TERM LIMITS. If the house and senate members would be restricted to no more than 8 years in office, there would be no reason for them to pander for votes, legal or illegal. It's all about power and $, always is.

Our porous borders are the best recruiting tool the Dems have, not to mention a direct route into the USA for any wanting to do wrong in this nation...

There's a ton of reasons for securing the borders and deporting ILLEGALS but no one has the fortitude to address those issues, political correctness says NO..

I sent Janet Napolitano a message a while back, after one of her visits to the birder in El Paso I believe.. She was there at NOON, with tons of security and told the news people that the border was safer than ever before..

I told her I could take her to places on that border that would scare the living hell out of her at midnight..

She never responded... Funny how that happens huh?