My Advice to Californians; Get Out Now 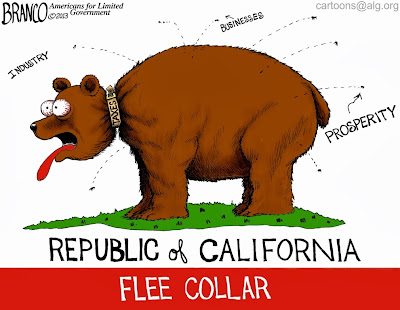 
If you live in California, I have a bit of advice. Get out now while you can afford the gas to load up the van and head north or east. You won’t be alone.


According to “Crazifornia: How California is Destroying Itself and Why It Matters to America”, about 150,000 Californians have been fleeing the state each year of late. “In fact,” wrote Laer Pearce, “Los Angeles alone has lost more households than New York, Miami, and, incredibly, the economically decimated city of Detroit…combined.”


The tide of traffic leaving the state is likely to increase. According to a news release from Earthjustice, one of the innumerable environmental organizations bent on destroying every form of energy that has fueled the growth of the American economy, the California Public Utilities Commission (PUC) has “finalized a groundbreaking decision to build innovative high-tech energy storage systems that will lead California toward a future of clean, renewable energy and away from dependence on fossil fuels.”


You remember fossil fuels, oil, natural gas, and coal. The “clean, renewable” energies are wind and solar because, of course, the sun shines all the time and the wind blows all the time. Or not.


By definition, energy “storage systems” can use mechanical, chemical, or thermal processes to store energy; these processes range from battery technologies to energy storage within compressed air or molten salt. If that sounds bizarre, it is.


According to Will Rostov, an Earthjustice attorney, “Clean, renewable energy sources will shape our future, whether the dirty antiquated fossil fuels industry likes it or not, so it’s excellent to see California getting there first. It took years by environmental advocates and state regulators to reach this point.”


Actually, Europe has been there for some time now. In England’s Yorkshire Dales, they’re tearing down four wind turbines that have been around for twenty years and “have not worked in years.” Indeed, across Europe there is a lot of buyer’s remorse for having embraced wind and solar. As Marc Morano, the editor of ClimateDepot.com, noted in an October 17 article, “Wind and solar mandates are breaking Europe’s electric utilities.”


“Last week the CEOs of Europe’s ten largest utilities finally cried uncle and called for a halt to wind and solar subsidies. Short of that, they want subsidies of their own. They want to be paid, in essence, not to produce power.” Thanks to mandates to use electricity from wind and solar Europe’s energy costs increased 17% for consumers and 21% for industry in the last four years.


California, in addition to requiring comparable use of wind and solar power while pushing to close coal-fired plants and keep some nuclear plants shuttered, will require its utilities to purchase 1.3 megawatts of “energy storage” power by 2020.


The San Jose Mercury News reported that “The first-in-a-nation mandate is expected to spur innovation in emerging storage technologies, from batteries to flywheels. Once large quantities of energy can be stored, the electric grid can make better use of solar, wind and other technologies that generate sporadically rather than in a steady flow, and can better manage disruptions from unpredictable events such as storms and wildfires.”


This is another very expensive Green pipedream that, like other California initiatives, would prove impossible to achieve and will be abandoned or ignored.


Since neither wind nor solar produce electricity in a steady, predictable fashion that enables utilities to ensure a flow of electricity to consumers, “energy storage” is the new, idiotic, alternative way of providing electricity that has been in effect since Edison first invented the turbines to produce it.


There is, simply put, no reason to require “energy storage” if “dirty, antiquated fossil fuels” were used. Wind and solar provide just over 3% of the electricity used in the U.S.


According to the Western Region Deputy Director of the Sierra Club, Evan Gillespie, “Fossil fuels like natural gas are a dead end for the people of California, the power companies, and the entire planet.”  If you listened to Strela Cervas, Coordinator at the California Environmental Justice Alliance, fossil fuel use is a conspiracy against “low income communities and communities of color overburdened by pollution, in particular from power plants. California does not need any new gas-fired power plants.”


Those low income communities might not agree, along with all the rest of the Californians, in the wake of the California Global Warming Solutions Act of 2006. While California strives to save the state from a warming that has not been occurring for more than 15 years, the new mandate that 33% of the state’s energy come from wind and solar is estimated to cost $114 billion, all of which will come out of the pockets of energy consumers.


According to Pearce, “Legislators, regulators, lawyers and environmentalists have driven up the cost of doing business in the Golden State until it has become 30% greater than in the neighboring states.” The result of 40 years of anti-business (and anti-energy) policy has caused a decline in the state’s standard of living. “California’s median household income plummeted by 9%--nearly twice the national average between 2006 and 2010, according to the U.S. Census Bureau.”


This is the kind of environmental insanity that has been at work at the federal level since Obama was elected in 2008. Billions have been lost in loans to wind and solar companies that went bankrupt within months and years. Think Solyndra. Now apply that same insanity to the whole of the nation as the administration continues its “war on coal” and actually laments the growing access to natural gas and oil due to hydraulic fracking technology.


The U.S. will produce more oil than Saudi Arabia this year. It has several centuries’ worth of affordable coal, scads of natural gas, and could expand its nuclear power generation if it wanted.


California is leading the way as it drives out its citizens and businesses, leaving behind only those too poor to leave; those dependent on a range of welfare programs that “redistribute” money from “the rich” and the middle class. They are turning the entire state into Detroit.


It is a war on the provision of electricity; the lifeblood of the nation’s capacity to function.

The problem with people leaving California is that everywhere they go they seek to turn that place into what they have left, another California..

We have too many here and they vow to turn Texas BLUE... They might, but there's going to be RED in the streets before they do...

Alan, perhaps they could capture all the hot air that comes out of the Hollywood types or have the LGBT crowd power treadmills?

One has to wonder how the millions of Mexicans will respond to exorbitantly high energy costs. Despite their ingrained socialism, or maybe because of it, at some point they might see this clean energy cant as a form of class warfare against them. If they could bring themselves to vote they might drive the environmentalist lunatics out of power.

One solution is to create East and West California. We live in the East which produces most of the food products and is decidedly a Red state. Many here feel they are not being represented by our politicians. If the West, with its larger voting base, was changes let them have them, but leave East California alone. And learn that importing there food will cost them.

The PUC? How do you pronounce that? Puke?

@Fred-
Not all of us... There are many like ‘yours truly’ that have lost all hope for a return of sanity; not just economically, but socially as well.

California, though beautiful in topography, is the bane of all who seek rational existence. The recent assault on the second amendment has proven to be disastrous for gun owners.
Another law that was passed allowing school children to choose which restroom to use based on their own declaration of sexual identity has been nothing short of a calamity.
The willingness to listen and be influenced by amoral politicians has this bus screaming toward the abyss.

The plan for this CA native is to be somewhere between Amarillo and Atlanta by 2016.