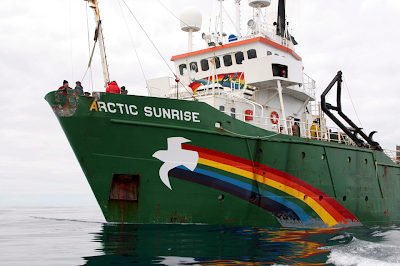 
I must confess I had a moment of schadenfreud—taking pleasure in another’s misfortune—when I read that, in late September, the Russians had seized the Greenpeace ship, Arctic Sunrise, and towed it to the port of Murmansk after Greenpeace personnel had boarded a Russian oil platform, “Priraslomnaya”, in the Pechora Sea.


Russia called the thirty people arrested “pirates” and, if found guilty, they face sentences from ten to fifteen years in prison. Five of them were Russians while the others came from some seventeen nations, including the United States. 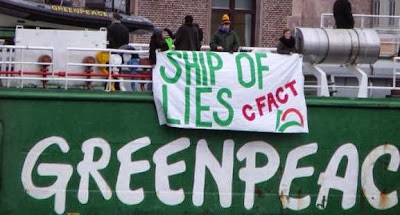 Greenpeace is best known for its propaganda tactics, the latest being the trespass of the oil platform, but in 2009, while Greenpeace’s Rainbow Warrior was docked in Copenhagen, the tables were turned when members of CFACT, a U.S. think tank devoted to debunking environmental claims, boarded it and, while distracting the crew with donuts, hung a banner that obscured the word “Rainbow” with “Propaganda” turning it into the Propaganda Warrior.


A CFACT spokesman said that the piracy charged seemed too severe, but thought lesser charges should apply. Even Russian President Putin said that piracy did not apply, but their actions were reckless. “We can’t help but appreciate the irony. Greenpeace conducts ongoing campaigns for greater government control over individuals. In Russia, they may get a taste of where that leads.”


Greenpeace has incurred the wrath of many with its aggressive, attention-grabbing tactics and, in 1985 French Special Forces sunk the original Rainbow Warrior when it was docked in New Zealand. Ultimately, an international court ruled that France had to pay Greenpeace $8 million. More recently, Greenpeace campaigners who scaled the chimney of the UK’s Kingsnorth coal power plant were acquitted.


While the incidents Greenpeace stages are intended to draw attention to it, most people are unaware of how large the organization is. It has offices in more than forty nations as it pursues its campaigns devoted to global warming, deforestration, overfishing, commercial whaling, genetic engineering, and anti-nuclear issues.


One of its founders, Patrick Moore, became a critic of what he deemed the organization’s scare tactics and disinformation campaigns. In 2005 he said that the environmental movement had “abandoned science and logic in favor of emotion and sensationalism” and was devoted to inventing “doom and gloom scenarios” to advance an agenda that is essentially opposed to many scientific and technological advances that enhance the lives of billions around the world.


Greenpeace says it depends on 2.9 million individual supporters and on foundation grants, but a recent article by Nick Nichols, a retired crisis management expert and author of “Rules for Corporate Warriors”, examined the cost of tax exemptions noting that “three tax-exempt Greenpeace organizations in the U.S. reported $39.2 million in revenue and $20.6 million in assets in 2011.” Other environmental groups such as the Environmental Defense Fund and the Natural Resources Defense Council also were worth millions and were exempted from taxes.


Consider the furor of the Internal Revenue Service’s targeting of Tea Party movement groups seeking a similar tax exemption, it tells you just how agenda-driven the IRS is when it comes to groups that claim they are charitable or educational. Nichols notes that both New Zealand and Canada have stripped Greenpeace of its charity status.


While Greenpeace and comparable Green organizations enjoy tax exemptions that would otherwise generate millions, they are also engaged in a wide range of activities intended to undermine its economic welfare. From opposing coal mining to nuclear energy, these groups do everything they can to deny Americans the benefits of affordable and vital sources of energy. They continue to claim that global warming is going to destroy the planet despite the growing body of information that demonstrates it is a hoax.


Patrick Moore recently lead a demonstration outside the Greenpeace office in Toronto, Canada, regarding the Greenpeace opposition to genetically modified rice, known as Golden Rice for its vitamin A content.

His banner read “Greenpeace’s Crime Against Humanity—Eight million Children Dead. AllowGoldenRiceNow.org.” For lack of sufficient vitamin A, the World Health Organization estimates that up to 500,000 become blind every year  and half of them die within a year of becoming blind as the result of this nutritional deficiency that affects an estimated 250 million pre-school children worldwide.


Russia has provided an object lesson in how to deal with these Green “warriors” on oil, coal, and nuclear energy, and other issues that harm people. Having saved Obama from complete humiliation when he proposed bombing Syria, Russia now demonstrates how to deal with propagandists whose love for the Earth excludes the humanity that calls it home.

If the Russians keep up the good work, in 2016 Americans may draft Putin for president :-)

Just like a lot of other things, Greenpeace is a crooked joke played on willing dupes...

The interesting thing is that well-meaning Greenpeace co-founder Patrick Moore left his organisation after he said that it had been hijacked by refugees from the collapse of world communism. How ironic!

"The collapse of world communism and the fall of the Berlin Wall during the 1980s added to the trend toward extremism. The Cold War was over and the peace movement was largely disbanded. The peace movement had been mainly Western-based and anti-American in its leanings. Many of its members moved into the environmental movement, bringing with them their neo-Marxist, far-left agendas."

Excerpt from Confessions of a Greenpeace Dropout « Beatty Street Publishing
www.beattystreetpublishing.com
You could call me a Greenpeace dropout, but that is not an entirely accurate description...

America (or Britain) could do worse Ronald. In fact are doing worse.

Perhaps Russia should fine these people the $8 mill France paid to Greenpeace. They couldn't claim poverty.