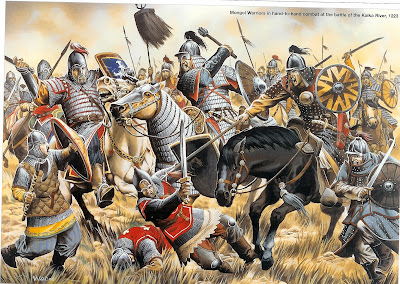 
I have been reading “The History of the Renaissance World: From the Rediscovery of Aristotle to the Conquest of Constantinople” by Susan Wise Bauer. Minus its notes and index it is 681 pages long and when you include them, it’s 785 pages. It is filled with gore. Between 1100 AD and 1453 AD, in Europe, in Africa, in South America, and in Asia, it is a chronicle of constant warfare, usually accompanied by slaughters that seem gratuitous, but were the normal order of the day.


(Note: For history buffs, the Renaissance is a name assigned to a period between the 14th to the 17th century, so the title of the book includes the period known as the Middle Ages.)


It was a period of constant conflict between kings and their nobles, between kings of England, France and Germany, between the Western and Eastern branches of the Church, with Muslim armies and with the Mongols who had conquered China and came close to the gates of Europe, pausing only because of the death of Genghis Khan. Even the fabled crusades were little more than an excuse for looting and pillage. Kingdoms and empires rose and fell everywhere as the tumult continued with only brief periods of peace for a lucky few.


Just as in the past, the threat of Islamic fanaticism looms large again and just as in the past we are seeing its most potent instrument of conquest, terror, being used. From 9/11 to the slaughters in Sudan’s Darfur region, the attacks in Nigeria, and tumult everywhere the Muslim population reaches a tipping point, the headlines are a reminder of its former history. Islam and bloodshed are synonymous.


If one were to look at just the last century, its history would resemble those that went before. Two world wars were fought along with lots of lesser ones. After World War II two major powers squared off, the United States of America and the Soviet Union. For most of my life they would arm themselves, fight proxy wars, and were deterred only by the unprecedented prospect of mutual annihilation by nuclear weapons.


In time the Nuclear Club would grow to include many other nations including France, the United Kingdom, China, North Korea, and, in the Middle East, Pakistan, India, and Israel. Twice Israel destroyed nuclear facilities under construction, first in Iraq and later In Syria.


It is no secret that Iran has spent billions of dollars and several decades since its 1979 Islamic Revolution to have its own nuclear capability. No one in the Middle East and elsewhere wants this to happen, least of all Israel. A fifteen-minute call between President Obama and Iran’s new President, Hassan Rouhani, was heralded only because no American President had talked to his Iranian counterpart in over thirty years.


Since taking office, Obama has made it manifestly clear that he wants to end the impasse between America and Iran. Obama has an almost mystical belief in his powers to negotiate his way to a satisfying solution. Most observers believe that the Iranians are playing him for a fool.


What is astonishing and dismaying is that Obama recently said that the world is more stable now than in the last five years. What world is he talking about?


His foreign policy failures in the Middle East are ceding much of it and the African Maghreb to militant Islamists.


Withdrawing from America’s superpower role since the end of World War II, Obama has managed to render America too weak to even gain the support of our most steadfast ally, Great Britain, when he ventured to threaten Syria over its use of poison gas. The result of that fiasco was a victory for Vladimir Putin of the Russian Federation for intervening to initiate talks regarding the removal of the poison gas. No one in the real world thinks this will ever happen.


When one reads history, it is the arrogance and rapaciousness of various rulers that runs throughout the whole of it. They literally slaughtered hundreds of thousands over the years between 1100 and 1453. It didn’t matter if they were Christian crusaders, the Mongol horde, or those leading a Muslim jihad. It is happening today in Syria with well over 100,000 killed by the Assad regime.


The rules today are no different than those in the past. Today Iran is controlled today by a Supreme Ruler, Ali Khamenei who replaced Ruhollah Khomeini. Though the outward trappings of democratic processes exist in many nations, does anyone believe the Iranians believe their elections are not rigged, along with those of many other nations? A functioning democracy requires people accustomed to living in freedom, protected by laws. There’s not much of that in many places throughout the modern world.


The power of the United States came from more than just its military capabilities. Much of the developed world and even those who resent its power understand America is a bastion of democracy and a stalwart for liberty.


Now, however, that moral power is in question. You can thank Obama for that.


Deep in debt due initially to the two wars that followed 9/11 and mostly from the policies of the Obama administration, the U.S. is on shaky ground when it reaches a point of shutdown over disputes between the President and the Republican Party. The issue, of course, is Obamacare. The nation can still easily pay its debts.


It feels different this time. We have a President who makes many of us wonder if all the debt he’s piled up has been to ultimately bring the world’s only real superpower to its knees.


If the current shutdown continues too long, the vacuum of power that it would provide might tempt other nations to engage in some very dangerous behavior.

I'm of the opinion that the people running our federal government are like the hijackers on 9/11, and We The People are the passengers on Flight 93 who had no choice except to attempt to take control of the plane before the terrorists could crash it into the Capitol Building.

I have the sinking feeling that when we get control of the cockpit, the plane will be in a death spiral to the ground...

This time the Capitol Building will not be spared.

We are sitting atop our salvation and return to "greatness". With our technology, natural resources, and American work ethic (before it is lost) we could usher in a new era of prosperity, were it not for the communist in the "Spite House".

The United States stopped being a Super Power the day Barack Hussein Obama was sworn in, and it's been a down-hill tumble ever since...

there is a huge problem with the US being the largest World Power, and that problem lies within the UN.

Bear with me for a minute.

The U.S. Navy is larger than the next 13 Navies combined.

The U.S. has two of the largest (by far and away) 'footsoldier' forces on the Planet, the U.S. Army and the U.S.M.C.

Whenever there is a 'hotspot' on Planet Earth, the good old UN blusters and moans and tells that Country that they are very naughty boys and to calm down.

Now, when they don't calm down, the good old UN turns to the only Country capable of mounting any sizable response, and yes, you guessed it, that's the U.S.

Whenever that happens and the US does respond, those 'bad guys' immediately stop fighting each other, and fight the dreaded common enemy.

When that peters out, and the U.S. goes home, they just resume fighting each other. It's a no win situation, as everyone involved, even those not even in the fight in the first place just end up hating the U.S.

They'd only need to do it once.

Oh well, we can but dream!