Another Grim Year with Obama 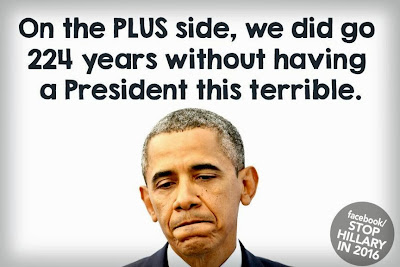 By Alan Caruba
The fifth year in the political marriage between Barack Obama and the rest of America has the look of a divorce in which a lot of Americans are wondering how we can rid ourselves of the worst President in the history of the nation. That’s not just my opinion.
As 2013 comes to a close it is abundantly clear that even the starry-eyed journalists and political pundits who thought Obama was as close to the Second Coming as American politics had ever known were having, not just doubts, but serious regrets. The White House press corps is now in a state of rebellion.
As the year began, Victor David Hanson, a senior fellow at the Hoover Institution and respected conservative commentator, took a look back at George W. Bush, the predecessor that Obama blamed for everything so often it became a joke.
“George W. Bush left office in January 2009 with one of the lowest job-approval ratings for a president (34%) since Gallup started compiling them—as compared to Harry Truman’s low of 32%, Richard Nixon’s of 24%, and Jimmy Carter’s of 34%--and to the general derision of the media,” wrote Hanson. Obama is likely to achieve a rating less than these predecessors.
Bush has distinguished himself by never publicly commenting on Obama while he has held office. When his presidential library was opened in April, Bush’s approval rating was 47%, but it is worth noting that Bush was in office when 9/11 occurred, followed by combat action in Afghanistan and in Iraq. Just before Bush left office, a financial crisis struck the nation.
The signs of dissatisfaction with Obama and his policies were evident as 2013 began. A January Gallup poll found that American opinion of the country’s state of affairs was at its lowest point since 1979. Fewer than four-in-ten Americans (39%) rated the U.S. in a positive manner. By February, the national debt during Obama’s presidency had increased $5.9 trillion, more than it had increased under all presidents from George Washington to Bill Clinton combined.
By April the New York Times columnist, Maureen Dowd, was continuing to put distance between Obama and herself. “Unfortunately, he still has not learned how to govern” wrote Dowd, adding “No one on Capitol Hill is scared of him.” Obama had devoted so much time to fund-raising and non-stop campaigning, that governing was obviously not a priority, but that is exactly why Presidents are elected.
By May, Politico.com reporters, Mike Allen and Jim Vandehei noted that Republicans in the House had one-third of its committees investigating scandals and wrong-doing by the Obama administration. “Establishment Democrats, never big fans of this President to begin with, are starting to speak out. And reporters are tripping over themselves to condemn lies, bullying and shadiness in the Obama administration.”
By July, a Washington Times editorial, “Obama’s Feats of Weakness” observed that “Since Mr. Obama took office, the opinion of the United States generally has declined in every country surveyed by the Pew Global Attitudes Project…Despite the vaunted White House effort to reach out to Muslim-majority countries, U.S. favorability ratings in Egypt, Jordan, Lebanon, and Pakistan are below where they were in 2008 when George W. Bush was at the helm.”
As 2013 comes to a close, longtime former allies such as Saudi Arabia are openly berating Obama for the secret deal negotiated with Iran. Egypt, a former ally, feels betrayed by Obama for his support of the Muslim Brotherhood and, Israel was being visited by Secretary John Kerry to express his opposition to new housing in Jerusalem, but he has put Israel at great risk of annihilation by Iranian nuclear weapon. The Washington Times opined that “There’s a reason Mr. Obama has not been a strong leader internationally. He never set out to be one because he has never believed in the exceptional mission of the United States.”
During the October government shutdown, Fred Barnes, executive editor of the Weekly Standards, noted that Obama “won’t negotiate with Republicans, though the fate of Obamacare, funding of the government, and the future of the economic recovery are at stake.” A veteran observer of the White House, Barnes said, “His approach—dealing with a deadlock by not dealing with it—is unprecedented. He has gone where no president has gone before.”
Earlier, in June, Barnes said “the Obama administration is in an unexpected and sharp state of decline. Mr. Obama has little influence on Congress. His presidency has no theme. He pivots nervously from issue to issue.”
When the Obamacare website debuted on October 1st, it was such a disaster that it was a perfect reflection of a horrendous piece of legislation that is causing widespread dismay and disruption affecting millions of Americans.
When you add in the residue from first term scandals such as Fast and Furious, Benghazi, and the use of the IRS to harass conservative groups seeking non-profit tax status, it was obvious to all but mindless Obama devotees that we face three years of further decline at home and internationally.
There is still massive unemployment. There are still massive numbers on government welfare programs and the nation’s health care system and insurance industry is being massively disrupted. The economy is improving incrementally, almost despite the administration’s policies.
To say that 2013 has been a bad year for Obama is also to say it has been a bad year for over three hundred million Americans. As Obamacare kicks in, 2014 will be a year its hidden taxes take effect. In November, voters will have the midterm elections to begin ending the a record of failed domestic and foreign affairs.
© Alan Caruba, 2013
Posted by Alan Caruba at 4:28 PM

I never knew a President could rule by Executive Order. It's like Congress doesn't exist. This guy needs to go now. I doubt this country can survive three more years of this clown.

Ron, I don't think there is a means to remove him from office at this point, but if the midterm elections give full power in Congress to the GOP, they can shut down the efforts he is making to harm the economy, increase debt, etc.

Happy New Year Alan!! May it be a good one for you and all your readers.

Thank you, Lime Life, and I wish you and all my readers a Happy New Year.

I have been a longtime fan of your website. I have used excerpts from some of your past postings on my blog to buttress some arguments I was making. I consider you extremely knowledgeable and a great writer. I hate to say it, but there would be no impeachment of Obama, no matter what he does. He controls the mob and the media. It would be political suicide for the GOP to even try. I am hopeful that the 2014 election will take the senate from the democrats. But the 2016 elections with Hillery as the anointed one, by the same media that anointed Obama, and the GOP will run another inept campaign and the democrats will promise the *gimmedats* more stuff to secure their vote or they will use the threats of peoples gov't benefits being taken away by the mean old GOP or both, and the ever popular "raising the dead so they can vote democrat". I really hope I am wrong I really do, I don't mean to sound negative but the balance point is almost here if we don't change things back, we may start the slide in history as the post Americana era. pushed by the large debt, the unfunded liabilities, the mindset of the low information voters and the keystone kops foreign policies of the present administration.

@Garibaldi. Yes, you're right. Obama will not be impeached and it would be bad politics this year for the GOP in the House to even go through the motions to do so. Chalk it up to wishful thinking.