The Supreme Court is Undermining Science and Society 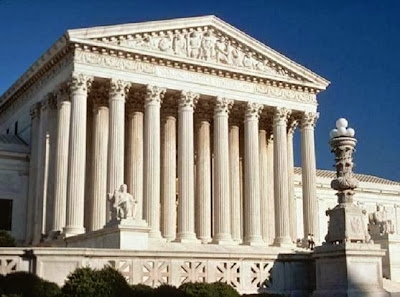 
The Supreme Court has taken up another case based on the Environmental Protection Agency’s campaign of lies that carbon dioxide is the cause of “climate change” and claims about the quality of air in the United States. The Court is composed of lawyers, not scientists.


At this point in the present era, the Court has made rulings that run contrary to the original, clear intent of the U.S. Constitution and has wrought havoc on our society.


In 1973 it ruled that the killing of unborn babies was protected and millions since then have been deliberately killed. It extended protection to sodomy and same-sex marriage. It is destroying the fabric of our society that has served Americans well for more than two hundred years.

It ruled that the Affordable Health Care Act was a “tax”, enabling the Obamacare to be unleashed with the subsequent loss of health care plans by millions of Americans, often the loss of their personal physician, and the requirement that deeply-held religious opposition to contraception and abortion be negated by a law that requires their beliefs be overruled and denied.


In 2007, I wrote a commentary that was published in The Washington Times. I criticized a Supreme Court ruling that carbon dioxide (CO2) was a “pollutant”, opening the door to the EPA’s rapacious intent to control all aspects of our lives based on this lie that is used to justify its war on coal-fired plants that provide nearly half of all the electrical energy we use daily.  “CO2 is not a pollutant,” I wrote, “It exists in the Earth’s atmosphere and every blade of grass and every tree depends on it.” It plays no role whatever in the Earth’s climate.


The Clean Air Act and revisions passed in the 1960s, 1970s, and 1990s. The original regulation of air pollution was a good idea, as were the laws affecting clean water, but the EPA has since used pollution to impose a vast matrix of regulations that do not reflect the fact that the nation’s air and water is now as clean as it ever can be.


A case that was recently argued before the Court is another EPA effort to rewrite the Clean Air Act, asserting that it be given authority to regulate the flow of alleged “pollution” between “upwind” states and those who receive particulates and gases under its control. Some 27 states are considered “upwind” and those states along with all others have their own air control laws. In states that are more heavily industrialized and which have a large number of coal-fired plants on which the EPA wants to impose expensive standards that have no basis in fact.


A coalition led by Texas of more than a dozen other states brought a case, Environmental Protection Agency v. EME Homer City Generation, opposing the EPA’s regulatory re-write of the Clean Air Act. In August 2012, the D.C. Circuit Court of Appeals ruled against the EPA which appealed to the Supreme Court.


The Wall Street Journal noted that “The D.C. Circuit only rarely overturns EPA rules, which shows how out of bounds the cross-state regulation is. The Supreme Court should overturn it for violating the federalist intentions of Congress, but there is also the added judicial incentive to show this increasingly rogue agency that it can’t rewrite the law as it pleases.”


The U.S. has been harmed by the many laws whose justification is based on the totally unscientific hoax regarding CO2. During the 101st and 111th Congresses, there were 692 laws introduced containing the term “greenhouse gas” when, in fact, CO2 is NOT such a gas, playing no role whatever in trapping warmth to affect the weather and/or climate of the Earth.


Stringent domestic laws and regulations, moreover, do not take into consideration the role of many other nations whose emissions are far greater than those produced here. However, reducing their emissions will have no effect on the Earth’s climate. The Earth is in what will likely be a lengthy cycle of cooling based on reduced solar radiation. It recently snowed in Egypt and in Israel where snow has long been a rarity.


The Obama administration’s “war on coal” has used the EPA to inflict an attack on the nation’s capacity to provide energy and the EPA has not ceased from using every ruling it has imposed to degrade the nation’s ability to maintain and expand the industrial base it needs to provide for economic growth, an increase in jobs, and the sovereign right of states to determine their own response to the need for clean air. The U.S. is a republic composed of separate republics.


At this point, control of the nation’s air and water quality should be returned in full to the states and the EPA should be eliminated as the threat to the nation it has become. The Supreme Court has played a role in this threat, ruling without any attention to real science, traditional values, and the clear intent of the Constitution.

Turning power back to the states will not be done by elected or appointed officials until the 17th amendment is repealed. If the states want the balance of power restored to them, as the founding fathers designed and intended, they’re going to have to 'take' it back, just as they gave it away. That means repealing the 17th amendment.

One more thing! It was 100 years ago this year the 16th (Feb. 1913) and 17th (April 1913) amendments were passed. These amendments were foundational for the progressive movement to attain their goal. Destruction of the Constitution, which both Teddy Roosevelt and Woodrow Wilson believed was an impediment to human progress. Both intellectuals, neither successful at being anything except intellectuals and politicians. The movement they each spearheaded, even though of different parties, brought us to this crisis with the passage of these two amendments. Repeal both amendments and everything else will fall into place.

Failure to do so will allow the beast to continue growing unabated, rampaging the traditional values of American society.