Living on the Edge of a Volcano 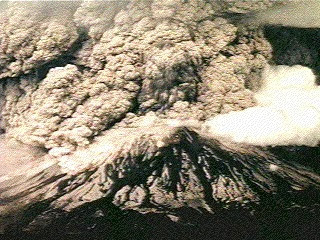 
Living on planet Earth these days is much like living on the edge of a volcano that can erupt at any time and which rumbles ominously all the time.


After three decades in which the United Nations and countless “environmental” organizations have tried to convince everyone that “global warming” and then “climate change” (the rebranding that occurred when the former reversed itself into a cooling cycle) was occurring, the effort to use this hoax to redistribute wealth from developed to undeveloped nations is pretty much at an end. Meanwhile, billions have been squandered at home and in other nations on “renewable energy” and all manner of “research”, largely based on phony computer models, complete with claims of a “consensus” that never existed.


Every so often a volcano erupts and the people are told to evacuate. Only, on planet Earth, there is no place to run because the systems developed to move money around are so rigged and so flawed that the systems are now in serious trouble. It portends default and collapse, something that nations try to avoid but which occur with regularity, along with recessions.
The present example is the printing of money backed by nothing more than the "full faith and credit of the United States" by the U.S. Federal Reserve bank which it then uses to purchase U.S. debt.


The United States is a volcano whose many social programs, all devoted to the redistribution of wealth by the government, are reaching a point of such an eruption; insolvency. Their need for reform is widely known, but there is no political will to make such reforms.

Meanwhile, the Obama administration keeps expanding them in the form of disability payments, food stamps, and, of course, Obamacare, the takeover of one sixth of the nation’s economy. It is such a huge disaster that no one can ignore it. The only solution is to repeal the law, but that is not going to happen for at least three more years while an incompetent narcissist and pathological liar remains in office. The progressive agenda is being pressed by the Democratic Party which is now just another name for the Communist Party.


As if problems at home were not so serious, the efforts of the President to downsize America’s role in the world is causing other nations to sense weakness and, of course, seek to take advantage of it. China, whose landmass is 3,705,407 square miles, has recently announced that it wants to expand its territorial outreach to include some islands that Japan has long maintained as part of its territory. The response has largely been tepid at this point, but if China’s claims are granted, it will expand on them. Treaties in effect would require the U.S. to go to war to defend Japan’s interests.


Other global problems include the expansion of Islamic fascism beyond the Middle East to include a more vigorous effort in North Africa, the sub-Sahara, and other nations to include Somalia. The threat is manifest enough for Muslim nations to engage in the effort to eliminate groups like the stateless al Qaeda. In recent times, some nations have seen the overthrow of dictators who have plundered them. They include Egypt, Libya, and Tunisia. In some cases this has created opportunities for the Islamists. Egypt has responded by outlawing the Muslim Brotherhood.


The threat of a nuclear-armed Iran has just increased by several factors when the United States led a group of European nations, plus Russia and China, in an effort to stop resisting Iran in favor of opening up its economy to various business deals that the sanctions imposed by the United Nations have deterred. It’s short-term self-interest versus a predictable nuclear holocaust. Previous efforts with North Korea failed.


Largely unknown to the world’s population is the way globalization has put every nation at risk should any of the world’s nations default on their debt. This has happened in the past, but not in the way a future default—particularly by the United States—would plunge the world into a financial crisis that no one can even imagine.


The U.S. is already seriously in debt with a gross domestic product (GDP)of some $14 trillion annually versus debt of various descriptions that range from $17 trillion in borrowed money to many trillions more in “unfunded” debt in the form of its social programs in which the U.S. collects money from its employed population and redistributes it to those unemployed. Unfunded obligations are now estimated to be around 90 trillion dollars. The so-called “trusts” of these programs is a fiction. The federal government has used that money to pay its on-going debts.


The current actual and estimated debt will affect the lives of today’s children, grandchildren, and future generations. It will take a hundred years to dig out from such debt.


U.S. budgets do not reflect “events” that can and will occur such as natural disasters. Wars break out when one least expects them. 9/11 was such an event. It drained ten trillion dollars from the economy. The various Wall Street “bubbles” collapse. The budgets are in many ways works of fiction.


The largest population the Earth has ever known, seven billion and growing, is perhaps the biggest volcano of all. Much of the population continues to live in actual or relative poverty. Much of it is aging at the same time fertility rates worldwide decline. Intellectuals keep calling for reducing the population by allowing as many as possible to die by denying them medical care.


Vast numbers of the population are voting with their feet. They migrate to wherever jobs and more freedom exist. The U.S. has not secured its southern border. Europe is under siege by migration from the Middle East and Africa.


The volcanoes of population and weakened economies are rumbling louder these days.

Lies, deceit and the support of brain-dead libbers, that's all they have, but hopefully, some of the Democrats ARE waking up...

Lets hope it's not too little and too late...

The "Great Reset" is coming!

This could be the last "normal" Christmas and New Year celebration in many years.