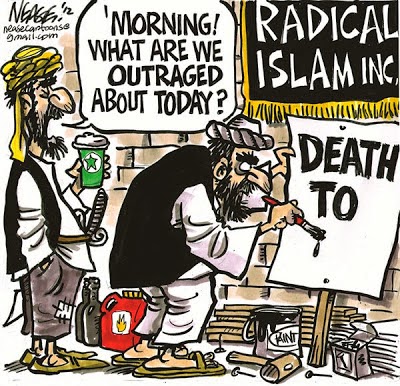 
I keep wondering why, here in the United States where three thousand died in a 2001 attack on the Twin Towers by terrorists affiliated with al Qaeda, we continue to be told that we must exercise sensitivity and tolerance for a “religion”, Islam, that worldwide is perpetrating not just violence, but a concerted attack on morality in general and Western civilization in particular.


There are more than a billion Muslims worldwide and surely many of them are personally opposed to what is being done in their name. Unfortunately, Islam has a long history of the violence being perpetrated and the general silence of Muslims must be interpreted as consent or the fear of speaking out. By contrast, anywhere anything is said, written or done that offends Muslims brings cries of outrage and demands for apologies.


Throughout the Middle East, in Africa, in Europe, Russia, India and China, just in recent times the evidence of the Islamic war on the right of non-Muslims to practice their faith is everywhere.


One of the leading authorities on Islam and the author of several books is Ali Sina. In “Understanding Muhammad and Muslims”, Sina bluntly says “The Islamic world is sick. It would be shortsighted to deny that the cause of this sickness is Islam. Almost every crime, every abuse and inhumanity perpetrated by Muslims is inspired by examples set by Muhammad and justified through his words and deeds. This is the inconvenient truth that sadly, so many would rather not talk about.”


In the West we ask how Boko Haram, an Islamist group now famed for kidnapping more than 250 Christian girls attending a school in Nigeria and forcibly converting them to Islam, can do such a crime, but in September it had shot 40 students in their sleep at a Nigerian college and within a week of the kidnapping had set off car bombs that killed at least 118 people in the Nigerian city of Jos. Unable to protect its own people, Nigeria needs an international task force to hunt down Boko Haram and destroy it.


We also must ask why it took so long for our State Department to list Boko Haram as a Foreign Terrorist Organization, adding them to the long list that already exists. As Daniel Henninger noted in a May 22 Wall Street Journal commentary, despite the fact that both the Justice Department and the CIA wanted the group added to the list, “State decided not to designate Boko Haram arguing other tactics were available” to deal with them. Henniger warned that “In matters of national security, the U.S. government “has become hopelessly bureaucratized and the public debate about it (radical Islam) hopelessly intellectualized.”


The U.S. government has been led by a President who made it clear that he was opposed to any criticism of Islam. Among his early promises was to close down Guantanamo and the term, “war on terror”, disappeared as one of the government’s goals. It was replaced by surgical attacks such as the one that killed Osama bin Laden and other al Qaeda leaders. It has not, however, slowed the expansion of al Qaeda or other Islamist groups.


On May 21, Raymond Ibrahim, an Associate Fellow at the Middle East Forum and author of “Crucified Again: Exposing Islam’s New War on Christians”, took note of the fact that Sudan had sentenced an eight-month pregnant wife and mother to death by hanging for refusing to renounce Christ and embrace Islam. It also ordered that she be flogged. “Tragic as this story is, it is also immensely commonplace in Islamic countries. Why/ Because Islamic law does in fact punish the apostate from Islam—including with death—in accordance with the commands of the Muslim prophet Muhammad.”


Ibrahim cited cases in which Christians were threatened with death or killed for being Christian in Afghanistan, Algeria, Cameroon, Egypt, Iran, Krygyz, Morocco, Pakistan, Saudi Arabia, Somalia and Tanzania, adding that “The fact is, Muslim converts to Christianity are even under attack in Europe.”


Because of the schism between Sunni and Shiite Muslims, the killings continue as they have from the beginning of this split shortly after the death of Muhammad in 632 A.D. There have been periods of peace in which the two sects lived together peacefully, but the violence began again in earnest in Iraq, also largely Shiite after years of Sunni control under Saddam Hussein. Though Shiites are a minority in Islam, Iran is Shiite and a leading supporter of terrorist organizations, particularly those led Palestinians, Hezbollah and Hamas.


Sunni Saudi Arabia, watching the U.S. negotiations with Iran, has begun to move away from viewing Iran as a threat to be resisted, fearful no doubt that the U.S. under Barack Obama will do nothing to protect the Middle East and the world from an Iran seeking to acquire nuclear weapons. In recent weeks the Saudis have opened relations with Iran.


On May 25, Iran’s supreme leader, Ayatollah Ali Khamenei, according to the regimes’s Fars News Agency, said that one of that nation’s goals remains the destruction of America. He told a meeting of members of Iran’s parliament that “Battle and jihad are endless…”, a classic Islamic point of view. As for the negotiations with the P5+1 world leaders, permanent members of the U.S. Security Council, plus Germany, they were entered into by Iran to secure a reduction in economic sanctions.


The U.S. resisted the threat of Soviet Communism from 1945 to 1991 until the Soviet Union collapsed, but it has signaled the world that it will not lead resistance to militant Islam.


The threat of Islam has been noted from its earliest years throughout history. It has no restrictions on slavery. It relegates women to a subservient class. It shares no moral resistance to murder, kidnapping and other crimes so long as they are committed in the name of “jihad”—holy war.


Today there is no greater threat to mankind than Islam. As far as Islam is concerned, you are the enemy, to be converted, enslaved, or killed.

This is bang on Alan. It coincides with my observations and recommendations for decades.

And Barack Obama is a traitor for his lies in support of Islam, especially the blatant misrepresentation of the Benghazi attack.

Good post. Islam is a contrived cult (based on a man who has less claim to exist than King Arthur), not a religion and should only be referred to as such.

On a more positive note based on demographics and its losing battle with modernism, the Muslim world is dying.

If you recall early in this president's first term he gave a speech at Georgetown University in one of their historic halls, and the democrats had the pediment showing the Roman symbol for Jesus (INRI) covered up so as not to offend any non Christians. If he is truly a Christian as he alludes they could have held this speech at a secular location, reinforcing my belief that he is a muslim!

'the Muslim world is dying'

Unfortunately, dying civilizations often cause a great deal of death and destruction before they go.