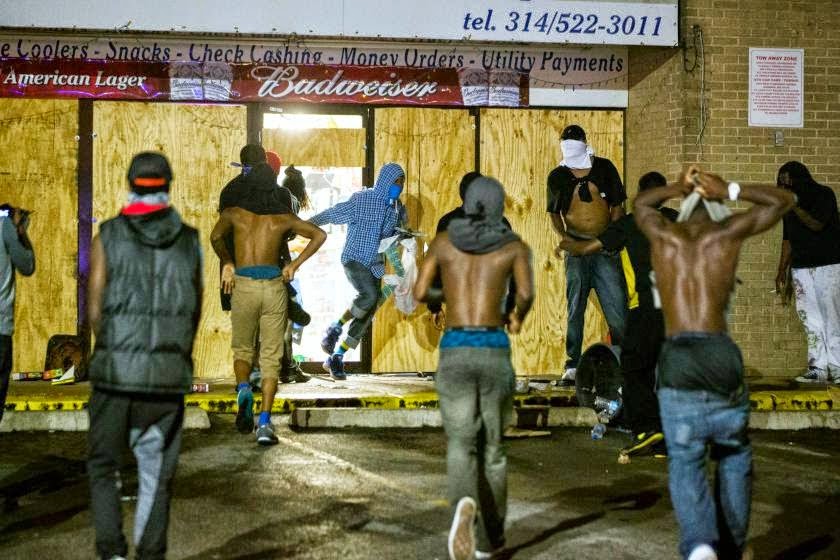 
Ferguson, Missouri and its re-run of 1950s civil rights grievances has now achieved national stature with the dispatch of our black Attorney General, Eric Holder, by our black President, Barack Obama, to address the unhappiness of blacks in the community over the shooting of a 6’4”, nearly 300 pound, black teenager, Michael Brown, who we are repeatedly told was “unarmed.”


According to witnesses, Brown had accosted a police officer, Darren Wilson, after being told not to walk down the middle of the street. After that, he reportedly “bum rushed” the officer who shot him. The reported facts of this case do not look good so far as Michael Brown's behavior is concerned and give cause for Darren Wilson, the cop, to once again fear for his life after some “protesters”, led by agitators, were heard calling for his death.


This old white man who lived through the civil rights era that was filled with protests, marches, and a number of riots during and since is frankly experiencing a lot of déjà vu to the point where I am largely disinterested in the events occurring in Ferguson, Missouri.
They have occurred before and they will occur again because a segment of the black community is convinced that their problems are all caused by white bias. It’s not. It’s caused by bad attitudes and bad behavior.


Don’t take my word for it. Consider what Dr. Ben Carson said during an August 18 Fox News interview. “Try living for 24 hours with no police. I think you’ll really find out what a difficult situation is.” Blaming “outside agitators” for stirring up trouble in Ferguson, Dr. Carson said, “I wish they would use that same energy to help us with what’s going on in Chicago and Detroit and New Orleans and Washington, D.C., where (there is) just tons of shooting, murder, violence all the time, where we have tons of teenage pregnancy.”


Attorney General Holder, however, is heading to Ferguson, not Chicago, the hometown of the President. Why the federal government is even involved in what is essentially a local shooting incident defies the imagination. If Holder wants to turn this into a civil rights grievance that is just sheer, total exploitation; the kind we have already seen from Al Sharpton, Jesse Jackson, and the New Black Panthers, among others.


Now, for a moment, let’s look at some other murders that have occurred thus far this year in which some 120 police officers have been killed in the line of duty; half of whom died by gunfire. Some were killed because they were cops, a form of bigotry that gets scant notice in the media.


A month prior to the August 9 shooting of Michael Brown, Officer Scott Patrick of Mendota Heights, Minnesota, was shot in the head and killed by a fugitive during a routine traffic stop on July 30. The suspect was a white male. Earlier, on July 13, Detective Melvin Santiago of Jersey City, New Jersey, was ambushed when responding to a robbery call. Suspect is a black male who was killed on the scene. The suspect’s wife allegedly said that more cops should have been killed. On July 6, Officer Jeffrey Westerfield of the Gary, Indiana police department responded to a domestic violence call and was ambushed, shot in his patrol car when he arrived. Suspect was a black male. On July 5, Officer Perry Renn of Indianapolis, Indiana, answered a call of shots being fired in the area and was shot as he arrived. Suspect was a black male.


You don’t have to be either black or white to hate cops and there are far too many who do.


Officer Darren Wilson had worked for the Ferguson police force for six years and had an exemplary record. No charges of bias or improper behavior. Like police throughout the nation he was aware of the killings of fellow officers and he had a thorough knowledge of life in Ferguson. Police routinely respond to the uglier and, of course, the most dangerous aspects of life where they serve to protect law abiding citizens.


What we have witnessed in Ferguson, however, is the inability of law enforcement to get the situation under control. It’s the reason it escalated from local to state police and National Guard involvement. The actions of local leaders, the police chief, and others have been too little, too late, as the momentum surged with the help of Sharpton and the criminals attracted to the atmosphere of mayhem.


The anger, however, is being directed toward Officer Wilson, toward “militarized” police forces, and white people in general for failing to rescue blacks from themselves. It is irrational. Michael Brown got shot because a seasoned police officer was in fear of being attacked…again. It’s called self-defense. It’s the reason cops wear bullet-proof vests and riot gear.


The main reason we are all forced to watch news coverage of events in Ferguson is because some of those events involved looting and vandalism. There are, in addition, shots being fired and Molotov cocktails, fire bombs, being thrown at law enforcement personnel who are dressed in gear to protect them from injury.


Whether the looters are locals or from outside Ferguson doesn’t matter. This kind of criminality and the destruction of the area in which an incident occurred is repeated over and over again.


The one thing of which I am confident is that Attorney General Holder will say something about the need for peace and tolerance. This is a man who has so politicized the activities of the Department of Justice in general and its civil rights division in particular that it is a very open secret. The President, meanwhile, is on record saying that people in Ferguson shouldn’t “holler” at one another.


I wish the media would leave Ferguson even though I know they will not. I wish the law enforcement folks would arrest as many criminals as possible and get them off the streets of Ferguson.


We are living in a very troubled world filled with violence and the events in Ferguson are small by comparison. We have seen it all before. This is not the 1950s or 1960s. It is 2014 and this is getting very old.