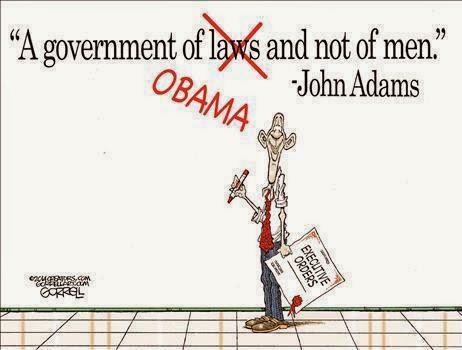 
“Today, however, President Obama has taken the concept of discretion and so distorted it, and has taken the obligation of faithful enforcement and so rejected it, that his job as chief law enforcer has become one of incompetent madness or chief lawbreaker. Time after time, in areas as disparate as civil liberties, immigration, foreign affairs and health care, the President has demonstrated a propensity for rejecting his oath and doing damage to our fabric of liberty that cannot easily be undone by a successor.”
That is Judge Andrew P. Napolitano, a Fox News commentator, writing in the July 31 edition of The Washington Times.


Americans and many around the world are increasingly fearful of a President who has demonstrated no regard for the checks and balances of our incredible Constitution, the oldest in the world that still functions to protect individual rights and which sets forth the divisions between our legislative, judicial and executive departments of government.


Congress, however, will not impeach President Obama, but the House will sue him on the basis of just one of the many examples of his dictatorial use of executive orders to ignore the power of the legislative branch to pass laws he took an oath to enforce. He has unilaterally and illegally altered the Affordable Care Act 27 times, his signature legislation that former Speaker of the House, Nancy Pelosi, said Congress had to pass “so we can find out what is in it.” No Republican member of Congress voted for this two-thousand-page-plus law, passed late in the evening of Christmas Eve, 2009.


The decision to impeach a President is essentially a political one and Republicans understand that the impeachment of President Obama would be interpreted by nearly half of the voters as an attack on a President they support. There have only been two impeachment actions in U.S. history and both have failed.


The nation is significantly divided regarding the President and Congress has been in gridlock as Democrats as the Senate Majority Leader, Harry Reid, has refused to let more than 300 House bills sent to the Senate be debated and voted upon.


Suing the President has ample history. It is hardly “a stunt” as Democrats have labeled it. New York Democrat Louise Slaughter called it “preposterous”, but failed to mention that eight years earlier, in 2006, she was a plaintiff in a lawsuit filed by congressional Democrats against George W. Bush!

In a 1939 case, Coleman v Miller, the Supreme Court granted standing to members of the legislature to sue. Two years ago, four Democratic members of the House filed a suit against Vice President Biden in his capacity as head of the Senate, challenging as unconstitutional the filibuster. Other Democratic legislators had filed lawsuits claiming standing in 2001, in 2002, in 2006, and in 2007. The judiciary concluded their cases had little merit.


In a July 30 Wall Street Journal commentary, David B. Rivken who served in the Reagan and Bush administration’s Justice Department and the White House Counsel’s Office, and Elizabeth Price Foley, a constitutional law professor at Florida International University, wrote:


“These barriers between the branches are not formalities—they were designed to prevent the accumulation of excessive power in one branch, As the Supreme Court explained in New York v. United States (1992), the ‘Constitution protects us from our own best intentions. It divides power among sovereigns and among branches of government precisely so that we may resist the temptation to concentrate power in one location as an expedient solution to the crisis of the day.”


“Congress has the exclusive authority to make law because lawmaking requires pluralism, debate and compromise, the essence of representative government…Litigation in federal court is an indispensable way to protect all branches of government against encroachment on their authority,”


“If you like your health care plan, you can keep it,” said President Obama. In April, a poll by PolitiFact of the Tampa Bay Times, revealed that 63%--nearly two thirds—of respondents agreed that President Obama lies at least some of the time on important issues and an additional 20% said he lies every now and then. Only 15% believed the President is completely truthful. Democrats were 39% of the 1,021 registered voters polled. Republicans were 38% and independents were 20%,


The President has lied so routinely that this character flaw is likely to play a role in the forthcoming midterm elections on November 4. When you add in his lawlessness and his leadership failures that have created a far more dangerous and divided world, Americans are likely to vote for change in Congress.


That’s how democracy works and how our Constitutional system works. Suing the President is just one part of it.