Islam is the Face of Evil 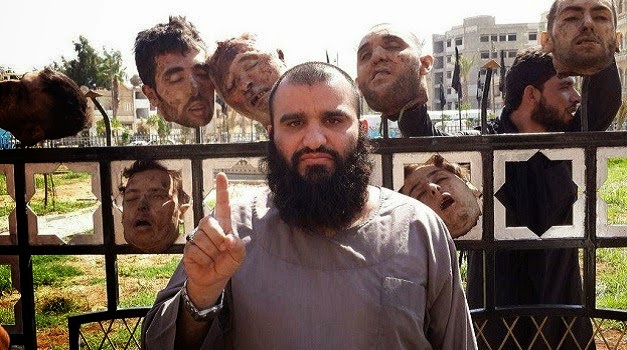 
"ISIS is not Islamic", said  Barack Obama as he gave yet another vapid speech to say what he will or will not do next about the threat of Islam. What he said is both idiotic and a lie. ISIS calls itself the Islamic State.

Obama used the word "war" only once, but ISIS is all about war---an Islamic holy war that has been waged since 632 AD.

The one person neither named, nor blamed is the so-called prophet, Mohammad, yet everything being done by the jihadists today is being done in his name.


In his memoir, “Dreams from my Father”, Obama, in the preface to its second edition, wrote: “Nor do I pretend to understand the stark nihilism that drove the terrorists that day (9/11) and that drives their brethren still. My powers of empathy, my ability to reach into another’s heart, cannot penetrate the blank stares of those who would murder innocents with abstract, serene satisfaction.” And therein is the problem that he, as President, and we as citizens must address.


Political correctness is so dominant in the Obama White House that no one in the U.S. government dares say anything that might be deemed critical of a so-called “religion” that sanctions beheadings, amputations, stoning, kidnapping hostages, ransoms, polygamy, and slavery. To anyone deemed an infidel or unbeliever or a Muslim who questions anything about Islam, death is the only option other than dhimmitude, a second-class citizenship.


The pure evil of Islam was seen most recently in the two videos of American hostages being beheaded by the Islamic State, but despite decades of attacks on U.S. embassies, the taking of U.S. hostages in Beirut and Tehran, attacks in Bali, Madrid and London, and the 9/11 attacks on the World Trade Center in New York and on the Pentagon, Americans have been slow to realize the intensity and size of the threat that the Middle Eastern and North African nations represent along with wherever else a large Muslim population exists.

As the U.S. and threatened Middle Eastern nations hurtle toward a military confrontation with the Islamic State, the name it has given to territory it has seized from northern Syria and into Iraq, a new book, Fault Lines: The Layman’s Guide to Understanding America’s Role in the Ever-Changing Middle East, ($19.95, Elevate, Boise, Idaho, softcover) provides one of the best, short histories on U.S. involvement and why, at this point, its influence has reached a low point.


Liebich writes of the way the U.S. policy regarding the Middle East changed over the years, particularly in the wake of World War II and the Cold War that followed as the Soviet Union challenged us for the implementation of communism worldwide. Dependent on the flow of oil from the Middle East, much of our strategic interest in the region was based on exercising our influence, often bringing about the removal of leaders whom we regarded as a threat to that necessity. After 9/11 that went into overdrive.


Liebich notes that our concept of nation-building proved costly, not just in the lives of our troops, but which included $50 billion in Iraq “and it didn’t work. Before you can build a nation you have to have a nation and only the citizens of that nation can decide what kind of a country they want to have.” The problem the U.S. encountered was that “In the Middle East, people related much more to the Ummah (the Muslim community) and to their own tribes.”


The problem that George H.W. Bush and his son, George W. Bush, encountered was that “The Middle East is a part of the world where many odd alliances appear. One is never sure who is allied with whom and whatever one thinks may all change tomorrow.”


Liebich takes note of the “Arab Awakening” that followed the U.S. invasion of Iraq that deposed Saddam Hussein. It began “with so much promise” followed by “its subsequent descent into chaos, has drastically changed the geopolitical landscape in the Middle East and North Africa.”


Liebich says “My definition of a vital national interest is one that deals with an existential threat to the United States, and one for which the U.S. is willing to spill its blood and to spend its treasure in order to accomplish its objectives. By this definition, the U.S. has no vital national interest in events in the Middle East.” Written prior to the emergence of the Islamic State, a new existential threat is facing the U.S.


Liebich says our strategic interests in the Middle East for many years included access to stable supplies of oil at reasonable prices; support for the state of Israel; preventing adversaries or potential adversaries from coming to power or achieving influence in the region; improving life for the people of the region; and preventing terrorist attacks on U.S. territories and citizens.


“The region has become the epicenter for terrorist groups, some of which have ambitions for a global reach.” That alone will require a renewed military involvement by the U.S. as we are the only nation with the capacity to alter the facts on the ground.


It comes at a time when the U.S. is close to having developed its oil reserves to a point where the oil of the Middle East will not determine our policies, but it is that oil which other nations such as those of Europe depend upon. China and India need it as well so its protection by and for the West as well as the developing Asian nations affects our decisions. Even Russia whose economy is dependent on oil and natural gas has cast its support for Syria along with Iran.


Everything, though, depends on understanding the true nature and intent of Islam.


Liebich ends his book with a quote from Winston Churchill who said, “We can always count on the Americans to do the right thing, after they have exhausted all other possibilities.”


Right now, the right thing is the destruction of the Islamic State.