The War Neither Obama, Nor Any Other Nation Wants to Fight 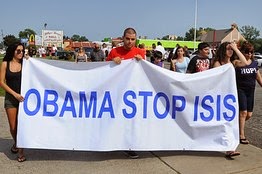 
Two trends have emerged since President Obama’s September 10 speech regarding his intention to “degrade and destroy” the Islamic State.
One is the understanding that he will not commit U.S. troops as “boots on the ground” to fight a force estimated variously between 10,000 and 30,000 depending on intelligence guesswork.


The other trend is the reluctance of any other nation to engage in the warfare that would be necessary to defeat the terrorist army occupying northern Iraq and a swath of Syria.


This was initially signaled at the NATO meeting in Wales and, according to a September 12 page one report in The Wall Street Journal, “A day after President Barack Obama outlined a strategy to combat Islamic State militants, Washington’s international allies didn’t make clear how far they would go to join military operations even as they pledged support.”


Who would support a President who said he had no intention of being “dragged back into a war in Iraq”?


That is not a “strategy.” It’s surrender. It is an admission of a lack of intent to confront what will surely emerge as a major threat to the Middle East and the West.


The Obama administration was initially reluctant to even call it a war. It was a “counter-intelligence operation” according to Secretary of State Kerry.  The President and his administration have spent six and a half years labeling terrorist attacks as anything other than acts of war. But 9/11 was an act of war.


The killing of soldiers at Fort Hood was called “workplace violence” when it was clearly a terrorist act. Obama and then-Secretary of State Hillary Clinton told us that the September 11, 2012 attack on the U.S. consulate in Benghazi, Libya that killed our ambassador and three security personnel was just a bunch of militants angered by a video no one ever saw.


In Iraq—a nation now in name only—its military fled from combat with ISIS. The result has been a demonstration of the barbarity of ISIS, killing Muslims and “infidels” alike in large numbers. The videos of the beheadings of two American journalists sent the U.S. a message that dramatically altered the simmering reluctance of Americans to make war on the Islamic State. The beheading of a British citizen will no doubt echo the U.S. population's desire for revenge and a full-scale war on ISIS.

Middle East expert, Walid Phares, says ISIS's message is that it has concluded that neither the U.S. nor Great Britain will engage it with troops, preferring only air strikes. No military expert believes that will be sufficient to defeat ISIS.


Turkey, that shares a border with Syria, Iraq and Iran, is fearful for the lives of nearly fifty of its diplomats taken hostage in Mosul when it was captured in June. They have cause, but Turkey has been increasingly Islamic in its outlook for nearly a decade, shedding its secular approach to governance. It has refused to allow the U.S. to use bases there to fight ISIS.


In Europe, Germany said it would not take part in any airstrikes against ISIS. Other EU nations will likely follow its lead. In a similar fashion, Arab nations have not indicated any intention to actively—militarily—participate in what appears to be a “coalition” in name only.


A post by Steve Eichler, CEO of Tea Party, Inc. says it all:


“We are in the gravest of situations. Our military—once the most powerful in the world—is crumbling.

Obama is purging every branch of the US armed forces at an alarming rate.

He's deliberately crippling our military, setting them up for failure and defeat. Through his actions he is rapidly demoralizing our troops en masse, creating a dangerous situation at home and abroad, leaving our troops, our country and we citizens open to attack.


Retired Army Maj. Gen. Patrick Brady, recipient of the U.S. military’s highest decoration, the Medal of Honor, as well as other top retired officers, say Obama’s agenda is decimating the morale of the U.S. ranks to the point members no longer feel prepared to fight or have the desire to win.
Our Army has not trained for six months. Meanwhile there is tremendous domestic and foreign unrest taking place. "To have the Chief of Staff of the Army confess to the world that our Army has not trained for six months is highly disturbing,” says former Florida Congressman Allen West. ‘[It] should make us all sleep less soundly at night.’”


Obama has been destroying our military in every way he can and, other than air power, he has a greatly reduced infantry and other forces with which to wage a ground war in Iraq. ISIS knows this and so does the rest of the world.


Not since the end of World War II and our ascendance as a superpower has America fallen to such a loss and lack of real power both militarily and economically.


The years since Obama’s election in 2008 have been an unqualified disaster for the nation, the West, and the rest of the world. They have looked to the U.S. to lead and now see a U.S. that has twice elected a man whose entire agenda has been to abandon leadership.


To some, his actions reek of treason.