A Supreme Court, Not Supreme Wisdom 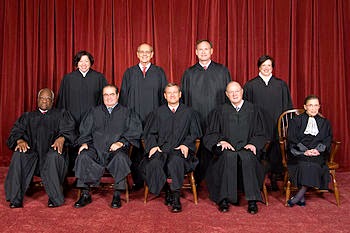 
I am not a lawyer, but I have read the Constitution and I cannot find any indication that the Founding Fathers intended the guarantee of “equal protection of the laws” in the 14th Amendment to include same-sex marriage.


The idea would have been regarded as an abomination to the men who created the Constitution. To many who regard the institution of marriage a sacred bond between a man and a woman, the decisions of lower courts that have facilitated same-sex marriage are deeply offensive


When the Supreme Court decided not to decide upon appeals from seven states regarding lower court rulings that their bans on same-sex marriage were unconstitutional, they essentially endorsed same-sex marriage. It is now legal in 25 states, paving the way for a total of 30 states that recognize it, but only by popular vote in three of them; the rest had it imposed through the courts.


The same can be said of the Supreme Court’s decision in 1973 that permitted abortion as a legal right. Here again, the 14th Amendment was cited. As one source noted, “The Court summarily announced that the ‘Fourteen Amendment’s concept of personal liberty and restrictions upon state action” includes “a right to personal privacy, or a guarantee of certain areas or zones of privacy and that “this right of privacy…is broad enough to encompass a woman’s decision whether or not to terminate her pregnancy.”


As this is being written, there have been more than 57,245,810 fetuses aborted since 1973 and, this year, there have been 840,045. Thus, decisions that the Supreme Court makes can literally result in life or death.


One of the most dramatic decisions of an earlier Supreme Court was the 1857 Dred Scott case that ruled that African Americans, whether slave or free, could not be American citizens and thus had no standing to sue in federal court, nor that the federal government had any power to regulate slavery in the territories acquired after the creation of the nation. The Civil War would follow in 1861 and last until 1865, resulting in more than 600,000 casualties, but finally ending slavery in America. Even some of the Founding Fathers had predicted that conflict.


When the Supreme Court has wandered into the area of social policy and culture, it has made decisions that were contrary to the majority of the population. The decision about slavery was about property—the slave--but many regarded slavery as an institution that must be ended.


The Supreme Court, of course, is not one long list of bad decisions. It has done much good and one man is credited with setting it on its course as a co-equal brand of the federal government. That man was John Marshall. I doubt that his name and deeds are  even taught in the schools of America.

As a brilliant and very entertaining biography by Harlow Giles Unger, “John Marshall: The Chief Justice Who Save the Nation”, reveals, “Marshall’s pronouncements would ensure the integrity and eminence of the Constitution and the federal government and catapult him into the pantheon of American Founding Fathers as the father of the American federal justice system.”


“He would become the longest serving Chief Justice in U.S. history, signing 1,180 decisions and writing 549 of them, or nearly half, himself.”  America was fortunate to have a legal scholar, utterly devoted to the Constitution, in its early, formative years. “Case by case he defined, asserted, and when necessary, invented the authority he and the Court needed to render justice, stabilize the federal government, and preserve the Union and the Constitution.”


Chief among Marshall’s achievements was to assert that the Supreme Court had the right and duty to declare federal and state laws to be either constitutional or unconstitutional. With that it became the third equal but separate branch of government.


Marshall had fought in the American Revolution and had had a distinguished career as a lawyer. As Unger says, “Clouds of doom shrouded the nation in 1800. George Washington was dead. For the first time in their twenty-five year struggle to govern themselves, Americans faced a future without the father of their country to lead them. And they lost their way.”


“Absent their commander-in-chief, the men who helped him lead the nation to independence went mad. Chaos engulfed the land as surviving Founding Fathers—Adams, Burr, Hamilton, Jefferson, Monroe, and others—turned on each other as they clawed at Washington’s fallen mantle.” Jefferson as the third President wanted to rule as a virtual tyrant, but Adams’ appointment of Marshall put a brake on those ambitions.


The United States is passing though a period of governance in which the Congress is so locked in partisanship and so divided that it is barely able to function in the national interest. The current President is losing the popularity he enjoyed when first elected and, now into his second term, he is losing the support and confidence of a majority of Americans. Barack Obama has repeatedly expressed his displeasure with a Constitution that places limits on his power as President.


As Unger notes “Nothing in the Constitution gives a President power to issue proclamations or executive orders with the force of law. Only Congress can legislate, yet presidents have issued more than 13,500 proclamations and executive orders since the founding of the Republic, while the Congress has enacted only about 20,000 laws.”


The Constitution remains supreme above the office of President and, in great measure, we can thank the work of Chief Justice John Marshall.