The "Malaise" Has Returned 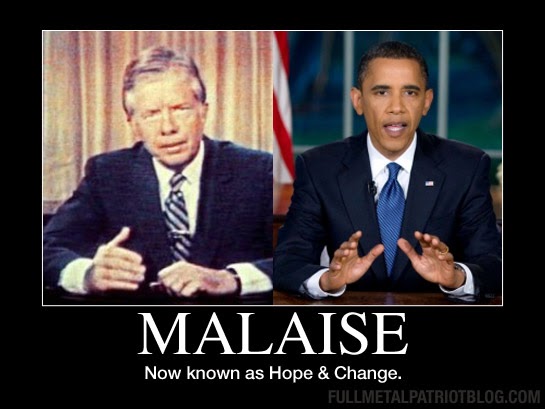 The joke is that Jimmy Carter is happy that Barack Obama has replaced him as the worst President of the modern era.  It is a supreme irony that Obama’s campaign theme was “Hope and Change” when Americans have lost a great deal of hope about their personal futures and the only change they want is to see Obama gone from office.

Elected by a narrow margin in 1976, Carter managed in his one term to see his approval ratings fall to twenty-five percent by June 1979. The lesson Americans have to learn over and over again is that liberal policies and programs don’t work.

In six years, the kind of dependence on the government to take care of people from cradle to grave has left the nation with 92 million unemployed or who have stopped looking for a job, entitled 45 million to food stamps, and there is still talk of a “minimum wage” in the interest of “fairness” that simply kills jobs, especially those that used to be filled by young people just entering the workplace. The worst part of Obama’s presidency is the lies he tells in the belief, apparently, that most Americans are so stupid they won’t see through them.

On July 15, 1979, in an effort to encourage a greater sense of confidence, Jimmy Carter delivered a speech that became known as the “malaise” speech, but which did not include that word. What it did, however, is double down on all the bad policies Carter had pursued and blamed Americans for not accepting them. By then the economy was in decline, gasoline prices and interest rates had climbed to record levels, and the voters were understandably pessimistic. Iranians had taken U.S. diplomats hostage and they would not be released until Ronald Reagan took the oath of office.

Carter’s speech began by asking “Why have we not been able to get together as a nation to resolve our serious energy problem?”  Quite literally there was no need then or now for an energy problem because, as recently noted by the Energy Information Administration, the United States has enough coal to last more than 200 years! With the development of hydraulic fracturing, fracking, we now have access to more oil than exists in Saudi Arabia.

Obama literally came into office saying he intended to wage a war on coal and he has; using the Environmental Protection Agency to institute regulations that have led to the closing a mines and the shutdown of coal-fired plants that used to produce 50% of the nation’s electricity; now down to 40%. He resisted allowing the drilling for oil in the huge reserves on our east and west coasts. He has refused to permit the construction of the Keystone XL pipeline. These policies have led to the loss of thousands of jobs during the time that followed the 2008 financial crisis.

In his speech, Carter said, “The erosion of our confidence in the future is threatening to destroy the social and the political fabric of America.” We would do well to remember that we have been through periods like this before and corrected course.

In 1980 Ronald Reagan would be elected to replace Carter and America prospered through his two terms, returning to being a major superpower, economically and militarily. That’s what conservatism produces.

Carter, however, blamed Americans for the problems of his times. “Two-thirds of our people do not even vote. The productivity of American workers is actually dropping, and the willingness of Americans to save for the future has fallen below that of all other people in the Western world.”
One of Obama’s earliest acts was to visit foreign nations and blame America for many of the world’s problems. Militarily he pulled our troops out of Iraq and he intends to do the same in Afghanistan. He has cut the military budget to the bone and has now defined its mission as one to address “climate change”, not the enemies of our nation.

Obama spent his entire first term blaming George W. Bush for every problem that he did nothing to correct. Indeed, Obama has never seen himself as the real problem, finding anyone else to blame.

Those Americans watching Carter deliver his speech must surely have cringed as he announced that he intended to set import quotas on foreign energy resources. He said he wanted Congress to impose a “windfall profits” tax on the very energy firms that he wanted to get us out of the doldrums and dependency that was causing the problem. He wanted the utility companies to “cut their massive use of oil by fifty percent within a decade.” He wanted them to switch to coal and now we live in a nation whose President doesn’t want our utilities to use coal. Why? Despite massive evidence to the contrary, he has advocated “renewable” energy, wind and solar, neither of which can ever meet the nation’s needs.

“In closing, let me say this: I will do my best, but I will not do it alone. Let your voice be heard,” said Carter.
In the 1980 election the voter’s voice was heard. Carter was gone and Reagan was our President. With him came his infectious patriotism and optimism. By late 1983 his economic program had ended the recession he inherited from Carter. A similar program would have put an end to what is now routinely called Obama's Great Recession.

We are at a point not dissimilar from the days of Jimmy Carter and with an even greater sense of dissatisfaction and distrust of Barack Obama.

I reach back in our recent history to remind you that on November 4th in our midterm elections and in the 2016 presidential election we can repeat history by ridding the nation of those members of Congress that voted for ObamaCare and have supported President Obama. We must wait to see who the GOP will offer as a presidential candidate, but we have time for that.