The Fourth Horseman has Arrived 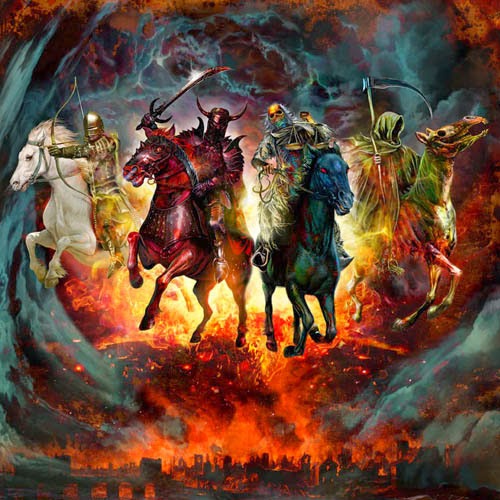 
“I looked and there before me was a pale horse! Its rider was named Death, and Hades was following close behind him. They were given power over a fourth of the earth to kill by sword, famine and plague, and by the wild beasts of the earth.” – Revelation 6:8


The Four Horsemen of Apocalypse as named in Revelation are Conquest, War, Famine, and Death.


It is an apt metaphor for what is occurring in America today. Ebola is now raging in several African nations, Liberia, Sierra Leon, Guinea, and Nigeria.


On September 30 the first African to make it to the U.S. with Ebola was identified. By October 8 he was dead. Ebola has arrived and, despite everything that the various agencies of the Obama Administration are telling us—the Centers for Disease Control and Homeland Security—I have no confidence it will not keep arriving.


Rather than denying entry to those living in the nations where Ebola exists there is no indication that U.S. embassies have been instructed to not issue visas. The notion that airline employees or those on alert in five U.S. airports could spot signs of an Ebola infection is so unlikely that merely scanning those suspected of having a fever provides little protection.


Britain and France have ended flights to or from the affected nations. The U.S. has not. This provides zero protection to flight crews, nor those at the arrival airports who process passengers. No mention is made of our porous southern border that is trespassed daily.


When one considers the evidence of incompetence in the nation’s federal agencies, there is scant reason to believe that either the CDC or HS are up to the task of protecting Americans, no matter how sincere their efforts. These are massive bureaucracies and they have been told not to spread any panic and their spokespersons at press conferences have held closely to this directive. No one wants panic, but neither do we want to be lulled into believing that Ebola cannot penetrate their efforts.


The only protection is to ensure that no one with even the potential of having Ebola is permitted access to the nation. Simply asking potential Ebola victims a few questions in foreign airports is tantamount to no protection.


My guess is that Ebola is already here among us. The notion that you can only be infected by close contact with a victim’s bodily fluids just doesn’t reassure me. An Ebola victim can likely spread it with nothing more than a sneeze.


Then we come to the President’s decision to send what is now in excess of 4,000 U.S. troops to the affected area troubles me the most. The odds that none of them will fall victim to Ebola seems close to zero. Since troops live and work in close proximity the potential spread of the disease among them is high.


I find it disturbing that the President did not hesitate to send U.S. troops to the Ebola zone in Africa, but cannot be convinced to send troops to find and kill the fanatical Muslims of the Islamic State before they gain more territory and pose a greater threat to our national security.

This is a President who has lied to Americans so many times that nothing he has to say at this point, particularly regarding the threat of Ebola, can be or should be trusted.
I find it disgusting that the President is still devoting more time to political fund raising than attending to his greatest responsibility, the protection of Americans by every means possible.


The Fourth Horseman has arrived.