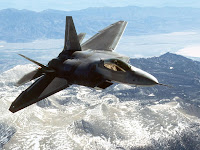 Not long ago, a friend with whom I went all through grade and high school sent me a video about the F-22, one of the most remarkable fifth generation fighter jets I have ever seen. He is now a retired Air Force General.

What I know about military affairs you could put in a bug’s ear. I served in the U.S. Army so long ago that the last crisis I recall gearing up for was a possible 1962 invasion of Cuba because of the missile crisis.

The latest news from Cuba is that a delegation from the Congressional Black Caucus, eager to embrace Fidel Castro, just returned with glowing words for his communist dictatorship. That should send a chill up your spine.

The reason I thought of the video was a recent statement by Michael M. Dunn, president of the Air Force Association, in which he took note of how that branch of our Armed Forces is being hung out to dry by the Obama administration and, in the process, leaving America and our allies that much more vulnerable to our enemies.

Production of the F-22 has been terminated. It is a fighter jet that would give us complete domination of the skies. Fortunately, most of the contract has been fulfilled, but it’s worth noting that such cutbacks also mean layoffs and lost jobs at a time when the nation is in a recession.

Production of the C-17 has also been terminated.

Production of the Combat Search and Rescue Helicopter has also been terminated.

Production of the Multiple Kill Vehicle has also been terminated.

The budget of the Missile Defense Agency has been reduced by $1.4 billion.

“This budget guarantees that the oldest Air Force in the history of our nation will get even older,” said Dunn, adding that “B-52s, built in the 1950s, will have to be kept on duty for a minimum of another 15-20 years.”

Did I mention that the missile defense cuts mean that there will be no increase of ground-based interceptors and that the Airborne Laser program has been terminated?

“The decisions,” said Dunn, “are not just programic nuance, but will impact core Air Force functions to include Air Force ability to deter, to conduct an air campaign, and to rescue our downed airmen.”

These cuts come at the same time that North Korea just tested a missile that could hit the West Coast of the United States. One would think that a robust missile defense, to include the anti-ballistic laser, would be a good idea.

We are all learning that President Obama is strong on tough talk, but the evidence suggests he is weak in respect to dealing with the hardware of defense.

If you’re thinking that the United States has become more vulnerable to attack in an era of non-state terrorism as well as places like Iran that keeps testing their missiles, you’re right.
Posted by Alan Caruba at 12:24 PM

Mr. Caruba, I'm having flashbacks to a time when I was too young to understand just how scary people like Jimmy Carter were! The libera utopia no more nukes crows kill me- maybe literally. God Bless~

And when the first blinding flash lights up the skies of America, I wonder who the Obama fans will be blaming? Let me guess ... can you say George Bush? It won't make any sense, and it will certainly not be the truth, but you can bet your ass they won't be blaming the Messiah. Just like they did in the days following 9/11, they will be pointing the finger at the Bush administration for not "doing something" to protect us ...

The cowardly appeasers will not be blaming anyone. They will be busy changing their underwear in the underground bunkers they inhabit in times of real crisis. Surprised at the actions of those with whom they have been actively dialoging, these craven carriers of treachery will wonder why their Godless friends have turned on them. Clueless, they will choke on the dry heaves of fear, as the reality of the true nature of man is revealed to their collective astonishment.

We were slated to purchase 184 F-22s. Under the Obama budget, we buy 187. That's three more than originally planned.

I was not among the 52.7% ill advised people who voted for our pseudo-President, so I am quite qualified to comment on his infernal misbegotten activities. During the election I wrote on as many blogs as I could find warning people that this man was an oily-tongued liar who did not have our national interests at heart. I hate to admit that I was right.