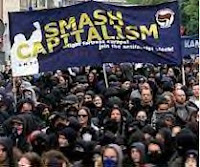 “Abolish money!” was the cry of some of those rioting in London, destroying property, and doing their best to get attention by creating mayhem at the G-20 meeting.

It is doubtful that most of these people have held a job for any length of time and particularly doubtful that any have ever started a business, met a payroll, or done those things that have since the earliest era of civilization created great economies in which the majority of a society thrives.

Generally, from my observations and experience, such people are young enough to not have a clue about the process by which labor is turned into profit. The absence of profit or gain of any sort is slavery.

In good times, everyone loves Capitalism. The money flows, the champagne flows, the purchasing of all kinds of things is intoxicating. The wealthy indulge themselves, often in obscene displays of their wealth, and the middle classes are inspired to become wealthier.

At the bottom of this pyramid are life’s losers. They are the ones who dropped out of school, committed crimes and went to jail, over indulged in alcohol and drugs, or engaged in unprotected sex, producing more poor people.

Envying the wealthy, including the middle classes, is as old as the days of the caveman. Indeed, throughout much of what we call recorded history the main occupation, other than farming, was pillaging and looting. Tribes and nations grew wealthy by banding together to steal from others. Those who were most successful at this were declared to be kings, built castles for their ill-gotten goods, and “lorded” it over those who could not afford to hire mercenaries of one description or another.

Thus, when Capitalism suffers a fit of some sort, we see the usual mobs in the streets who, for lack of the jobs that Capitalism provides, shake their fists at the bankers and the corporations for failing to “share the wealth.”

It is instructive to look at those nations that combine poverty with despotism. Every year Parade magazine’s David Wallechinsky lists “The World 10 Worst Dictators.”

Number one this year is Robert Mugabe of Zimbabwe. He has managed to turn a nation with many natural resources into a place that recently issued a $50 billion banknote that will purchase, at best, a loaf of bread.

Number two is Omar al-Bashier of Sudan; recently the subject of an arrest warrant by the International Criminal Court on charges of crimes against humanity. In the 2007 Pocket World in Figures, Sudan ranked second for total number of refugees after Afghanistan. People “vote” with their feet to leave nations that are corrupt or careless to aid general prosperity.

Number three this year is Kim Jong-il of North Korea, a nation that imprisons hundreds of thousands of its own people in labor camps and whose main export appears to be missiles and other weapons of war.

Without wishing to bore you, those nations with the leading despots are almost exclusively Islamic. They include Iran, Eritrea, Libya, Turkmenistan, Saudi Arabia, and the aforementioned Sudan. The exception is China which is still ruled by a Communist cadre that has heartily embraced Capitalism, but not for the purpose of governance.

Little of the oil riches of the Middle Eastern and African nations ever reach the citizens of these nations and corruption is the primary instrument by which anyone achieves any wealth. Oppression is the primary form of political power.

Meanwhile, the rioters in the street of London loudly decry the one economic system that has truly “spread the wealth around” to quote the current Socialist President of the United States.

The great “problem” of Capitalism is that it is based on two premises. The first is “risk.” This includes, of course, investing in stocks. America has a huge investor class. The second element is plain, old hard work. A meritocracy, those who work the hardest generally reap the benefits of that effort. The sanctity of the contract and an impartial justice system supports all working relationships.

The great “promise” of Socialism and Communism is that all the wealth common to a nation’s population will be “redistributed” even to people who do not work at all. This seldom—never—works because people who work for a living generally resent those who do not. They have even less sympathy to those who steal for a living.

Something is very wrong when members of Congress pass unconstitutional laws to impose a punishing, ex post facto tax on people who have received “bonuses” for their labors or on those who enjoy a higher standard of living as the result of their work.

Something is very wrong when a President can, in effect, take over an investor owned corporation like General Motors to require that its CEO be fired and likely replace its board of directors with his own choices. This is fundamentally illegal when the logical and proper recourse is bankruptcy. Giving taxpayer’s billions to such companies is appalling.

Something is wrong when the federal government intrudes into the housing and mortgage marketplace instead of leaving it to function unfettered except for reasonable regulation to avoid abuses. Requiring banks and mortgage companies to make bad loans is an insane practice and is still the law of the land.

Something is very wrong when virtually all of the regulatory agencies, as well as those members of Congress charged with oversight, completely fail to exercise their duties, thus allowing elements of our financial system to encounter huge losses.

History has repeatedly demonstrated that, in a Capitalist economy such as ours, it is the failure or intrusion of our government that produces recessions and depressions. Excessive spending and excessive borrowing punishes everyone.

Given our present elected leadership, Americans are guaranteed only one thing—more of the same.
Posted by Alan Caruba at 11:53 AM

The warning signs have been there for a long time. Who can forget congressman Ellen Tauscher's (still serving!) 1997 comment: "The Constitution was never meant to be the only set of laws that we follow. I had a blue dress when I was five, but I can't wear it because it doesn't fit me anymore. There are lots of things that change over time and you have a whole bunch of legislation enacted every day, every month, every year that adjusts and calibrates to the times and to the issues...what is perceived to be the best thing for the American people...and these are called laws, and, you know, I think they've been doing a pretty good job."

Since you won't say it, Alan, I will: The USA: 1787-2009. RIP. 222 years. About average, as governments go. Our main governance document, the U.S. Constitution, was wadded up and tossed in the trashcan in the 2008 election. Far too many people in this land are guided by nothing but their emotions, which includes the majority of people in Congress who took vows to protect and defend the Constitution. Unchecked government, mob rule actually, is now the law of the land. Our representative republic is irretrievably lost.

Oh well, it was a grand idea while it lasted.

I am not prepared to write an obituary for the USA. It is endangered--perhaps moreso now than in a half century or more.

It must now survive a Marxist President who I believe hates the nation and a Congress of morons and cowards.

It's us against them...and if we start showing up in the streets of Washington, they will have to pay attention. That's coming.

Alan, I agree, it's too early for obituaries.

The lifeblood of democracy is ideas, and the socialist idea is dead.

The ideas and ideals of the USA and the free world are in ascendency, and in spite of hiccups, will endure.

Once the UK comes back to its senses, it's getting there, and once your president becomes discredited, or surprises the world and gets into a learning curve (another 9/11 may be the catalyst) the wobble will lessen.

There are a lot of eyes watching, and commentators observing...