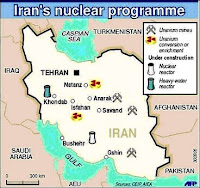 “DEBKAfile's military sources cite some Western intelligence and nuclear weapons experts as predicting that Iran could turn out nuclear weapons some time in the next 12 months.”

Anyone paying any attention to Israel these days knows that it is preparing its own citizens and the world for a strike against Iran’s nuclear facilities.

Except for foreign consumption, the Israelis have largely abandoned talk of peace with the Palestinians or hope for any other alternative other than to punish an Iran whose leaders are totally obsessed with the destruction of their homeland, sacred to millions of Christians as well

The military action against Gaza was designed to neutralize its military capabilities and to warn Hamas against taking further action against Israel. Take a look at a map. Gaza is a thin strip of land, but it seethes with hatred for Israel because its inhabitants are mere pawns in the larger game the Arabs play. I doubt Arab nations are bothered greatly by keeping this group of people stateless refugees for at least two generations. The Palestinians, however, have consistently refused to accept statehood.

In Lebanon, Hezbollah has been unusually quiet of late. As for the rest of the Arab nations in the region, all would be delighted if Israel takes out the Iranian nuclear capability. They cordially hate Iran for its hegemonic ambitions to control the Middle East. Iranians who are Persians, not Arabs, may share Islam with the rest of the region, but they have far greater cultural and historical roots.

At this point, all of President Obama’s efforts to “reach out” to the Iranians have been rebuffed and now they are holding an American journalist hostage. The Iranian revolution began by holding American diplomats hostage for 444 days and they have routinely taken hostages as playing cards.

Neither America, nor Israel, takes hostages. We both, however, have a good track record for killing our enemies.

Israelis have had their soldiers taken hostage, often killed, and have been trying to get one returned from Hamas control for several years now. Arabs know that every Israeli is the concern of the whole nation. This contrasts greatly with the incessant rocketing of southern Israel that Hamas engaged in until the Israelis had no alternative but to retaliate. Then their leaders hid in safe bunkers while the populace was left to fend for their own lives.

These are not nice people. The Iranian leadership could have opted to join the modern world, benefit from their oil riches, built and upgraded their refineries, and done all those things nations do to improve their infrastructure and compete in the global marketplace.

Instead they used the oil wealth to sponsor both Hamas and Hezbollah and, of course, they have invested millions in the pursuit of nuclear power, not for electricity, but for the waging of war and, in particular, for the annihilation of Israel, a goal articulated over and over again by its President, Mamoud Ahmadinejad, and the handful of ayatollahs that rule with an iron fist.

The Israelis have learned the lessons of the Holocaust; the deliberate murder of men, women and children who were Jewish. They will not let that happen again. They will strike at Iran and, unfortunately, they will not have the support of the United States’ current leadership who are either too naïve, too willfully blind to the threat, or just too inept to deal with the Iranians.

It would not surprise me if the United Nations took the occasion to expel Israel as a member nation. It would be a good, but lost, opportunity for the United States to announce its withdrawal from the stinking heap of offal that passes itself off as an international institution worthy of any support.
Posted by Alan Caruba at 12:45 PM

"As for the rest of the Arab nations in the region, all would be delighted if Israel takes out the Iranian nuclear capability."No, you are wrong. You show signs of not knowing the subject material very well.

...they have far greater cultural and historical roots.omg. Please see my above comment.

"Neither America, nor Israel, takes hostages."Well, they both take hostages similar to the American journalist you are referring to. "Hostage" is not a synonym of "prisoner". Please check your dictionary.

You are clearly not informed about this subject, why do you bother blogging about it?

Is it just a coincidence that "chewwwwpid" rhymes with "stupid"?

As for your breezy dimissal of the views I expressed, I noticed you did not offer anything to dispute them except to argue over the definition of "hostage".

And, yes, we do take prisoners as part of this war on terror, but now Obama wants to not only let them go, but set them up here in America.

A bit of advice, don't bother commenting in the future. You're not welcome here.

Iran is not about to give up its quest for nuclear weapons. Time will show this to be a fact. Yes, I'll await the time.

As for Israel, I fear the Obama Administration will only provide uncertain support.

Israel will have its nuks & so shall Iran.

The times we live in are interesting.

Isreal has had Nukes for a long time
and has cruise missile launching subs built by Germany plus some subs bought from the USA so I think that Iran will get some nukes but not in the way they want more in the way Isreal decide's to deliver them.
You are right Alan "chewwwwpid" does rhyme with "Stupid".