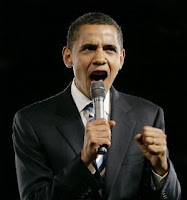 Is it just me or does President Obama look and sound more desperate with every passing day? He thought he could fool all of the people all of the time and it turns out that he can’t.

Mark your calendar for Saturday, September 12, 2009. That’s when a Washington, D.C. protest march is planned. Led by FreedomWorks, their website says they will be joined by many other national co-sponsors such as the National Taxpayers Union, Americans for Tax Reform, Young America’s Foundation, and Tea Party Patriots, to name just a few.

This is why the First Amendment to the U.S. Constitution guarantees “the right of the people peaceably to assemble, and to petition the government for a redress of grievances.”

I doubt that President Obama will be among the speakers that day, although he has been out on the stump of late trying to convince Americans that things will improve if the government is given control over the nation’s health system. He’s already nationalized part of the auto industry, a major insurance company, banks, and probably little Bobby’s lemonade stand in front of his home.

Obama’s relentless assault on the private sector of the nation’s economy can be seen in the following percentages of the Gross Domestic Product: Healthcare represents 17%, energy is 9.8%, and financial services are 8% of GDP. These are the sectors that have been targeted for takeover by the Obama administration. It adds up to 35% of GDP!

In May, columnist Robert Samuelson, writing in Investor’s Business Daily, asked “Just how much government debt does a president have to endorse before he’s labeled ‘irresponsible’?”

Deficits are the annual gap between government’s spending and its tax revenues. The debt is the total borrowing caused by past deficits. As confidence in the U.S. dollar and the credit of the United States decreases, the amount of interest on borrowing will increase.

While it is true that the federal government has run deficits in all but five years, the debt has always remained below fifty percent of GDP.

I submit that NOTHING Obama says about deficits or debt can be trusted and his pet project, the horrid “Cap-and-Trade” program, a tax on energy use—electricity—that will drive up utility rates for all Americans. It will reduce the amount of money consumers will have for their other needs. It will drive manufacturing to other nations.

Cap-and-Trade, a carbon tax, is based on the utterly FALSE assertion that CO2 and other greenhouse gas emissions contribute to a “global warming” this is NOT happening.

Obama’s proposed healthcare reform is a nightmare. There is no such thing as free healthcare. It is financially unsustainable. This has already been demonstrated in Massachusetts. Utah has just passed a program to institute rationing of healthcare options.

The “entitlement” programs the government instituted in the last century are already facing major financial stress. Social Security will grow by between one and two million new beneficiaries from 2008 to 2032, up from 500,000 a year in the 1990s. The government taxes its benefits. It is not, as originally planned, a “voluntary” program.

More than one million people a year will join Medicare as of 2011 when the first Baby Boomer turns 65.

Nor has the government set aside money to pay military and civil servant pensions or health care for retirees. These unfunded obligations have increased an average of $300 billion since 2003 and now amount to $5.3 trillion.

Because of President Obama’s budgets and the Democrat-controlled Congress, the nation will be faced with trillion dollar deficits for the foreseeable future. It will destroy jobs that will move to other nations and leave future generations with huge financial burdens.

As the Associated Press reported on July 14, “The federal deficit has topped $1 trillion for the first time ever and could grow to nearly $2 trillion by this fall, intensifying fears about higher interest rates, inflation and the strength of the U.S. dollar.”

The GOVERNMENT has done this to us. Obama has exponentially increased the problem.

Only a major reduction in the size of the federal government can provide any remedy. I suggest it begin by ending the Education and Energy Departments, along with the Environmental Protection Agency. It’s a start.
Posted by Alan Caruba at 1:15 PM

I would like to know where he is getting his crazy crazy ideas from?
Does he make them up as he goes?
Is he talking to his guru? Is he playing with a Ouija board? Is he throwing chicken bones and reading them? Is his monitor talking to him? Is he having dark counseling sessions with a cloudy figure? Is he reading Tarot cards?

I had lunch today with friends of mine who are professionals and hold phd's. I have to tell you, we're all in gloom. It's just as if we are seeing the unraveling of our great country before our eyes.

We don't know what the solutions are. One of us, raised the question, if it's bad now with this man. What will it be like 4 years from now? Will we have a country?

It's not only us that we worry about. What about our kids and our grandchildren when he has done so much damage. Good grief 4 more years of insanity?

I wouldn't even call him Irresponsible, I would call him the 'master of disaster'.

As someone who personally survived Jimmy Carter I can offer some hope...his name then was Ronald Reagan...which is to say the nation has had some really stinko presidents in the past and somehow was able to move on and find some good ones.

It looks to me and a lot of much smarter people than myself that even the Dems in Congress will desert Obama once Cap-and-Trade and this healthcare monster is defeated. They have to know that passing either or both will be a gift to the GOP in 2010, given Obama's nose-diving polling numbersl...and theirs!

Self-survival is the first rule of Congress critters.

Obama is doingt exactly what he is supposed to do. He is here to destroy confidence in the dollar, gain government control of the means of production, turn a blind eye to the Islamist threat, and ultimately destroy the country we once knew by any means. I'm not sure how he got there. To some degree many people voted for him to get their share of the wealth he proposed to "spread around", I'm inclined to believe he was put in office by an outside agency; person or persons unknown. That idea smacks of 'conspiracy theory', but it's plausible given all that is transpiring in the world.
ACORN's involvement in the election has been conveniently swept under the rug even though in Nevada it was proven that they registered the entire defensive/offensive line of the Dallas Cowboys as Nevada voters. THAT seems very much like conspiracy.
Obama has become a larger threat to this country, at the moment, than Iran with nukes. If he gets Cap and Tax passed and signed and if he succeeds in destroying our health care system I predict that he will then pursue his stated goal of having a civilian cadre trained, equipped and armed equal to our current military forces. He has already expressed a desire to achieve that goal.
If this continues he may need them.

I think BUZZg hits the nail on the head. I've suspected something of the sort since I first heard that someone with the name Hussein was being considered as a Presidential candidate. When the campaign was in it's infancy, I mentioned that fact to a hard core liberal I know, who was hell-bent on voting for him. She responded with "WHAT? Are you kidding me?" She didn't even know that Hussein was his middle name. It seemed to me at that time that a light bulb had been switched on in her feeble brain, and she had finally awakened to what was in store for us. I don't know how SHE voted, but I was encouraged by her reaction, and thought that maybe, just maybe, people would wake up and realize the risk of voting for an unknown candidate with Muslim roots. Sadly, way too many others kept their heads in the sand, and we're now faced with trying to extract a traitior from the highest office in the land before he destroys our country from within. I predict Mr. Obama will indeed need his private security force, as will all the other traitors like Pelosi, Reid, and Frank. To quote one of the last men who tried to destroy America, they are about to "wake the sleeping tiger".

Guy and Buzzg have it right when they begin to suspect Obama's motivation. He is a convenient player in a much larger movement which has chosen to remain below the radar.
Conspiracy is a perfectly good English word. It simply describes a group of like minded individuals getting together to discuss their plans to do something harmful to another group. Our problem today is that the word has been given the additional meaning of "WHACKO!". There are conspiracies in the Bible, I'm sure there were some in revolutionary times and they survive today amongst those whose goal is destruction of our national sovereignty. The Trilateralists, the CFR and others conspire, but when someone tries to expose their nefarious plots, they are subjected to ridicule and moved in our mind's eye view to northern Idaho, where they seem to camp out and eat stuff from boil-in-a-bag.
The Trilateral Commission is real, and most open in their desire to subvert our Constitution. Read their documents and the biographies of those who are members (begin at www.augustreview.com). As you connect the dots, you'll find they point to an incontrovertible reality that unelected people are in charge! Obama is simply a pawn and I suspect he'll be sacrificed on the socialist altar, as soon as he is exposed as inept or his usefulness has run its course.

"Is it just me or does President Obama look and sound more desperate with every passing day?

He certainly looks like he's under a LOT of stress. That's what happens when someone is overwhelmed by a job that is waaaaaaayyyyyy over his pay grade.

I saw him on some videos recently, so I know that's not a photoshop. He looks like he's aged 20 years in the last 6 months. At that rate, he may not make it the next 3 and 1/2 years, which are bound to get far more stressful, mostly as a result of his incompetent stewardship.

That's odd, I guess I forgot to check if I put the link in correctly. Sorry. Here it is.

It worked in preview, so hopefully it will work now.