Are They Stupid or Evil or Both? 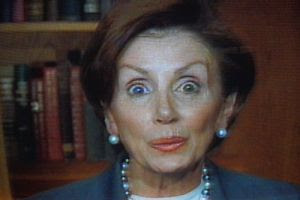 It is an ancient question about any group of people who constitute a government. Are they stupid or evil? Or both? Or just stupid and the evil flows from their stupidity?

I rather imagine the Roman senators lounging around in their bath houses and asking one another whether Quintas Fabius Maximus Eburnus is a moron or has something up the sleeve of his toga?

My thoughts on this have naturally turned to Madame Speaker, Nancy Pelosi, Senate Majority Leader, Harry Reid, our President, and the motley group of cabinet secretaries and “czars” advising him.

I have concluded that they are, individually and collectively, the most stupid people Americans have ever elected or had appointed to public office.

I know that historians will be emailing me asking, “What about Andrew Johnson” who succeeded Lincoln following his assassination or, for that matter, Lyndon B. Johnson who became president when JFK was killed. There probably should be an amendment to the Constitution forbidding anyone named Johnson to run for high office.

And, yes, the same historians will be clamoring to have me add Millard Fillmore to the list who, in 1856, was nominated by the American (Know Nothing) Party.

Even this short list suggests that Americans have literally survived some extremely dim bulbs in high places. However, in the days before 24/7 cable news coverage and C-Span, we were unable to see and hear the morons with such clarity.

President Obama worries me because he is an ideologue, defined by what he believes as opposed to what he knows.

In Cairo, he gave a speech saying that Islam is a tolerant religion when it is objectively the least tolerant, whose adherents are actually urged to kill unbelievers (infidels) and any Muslim who decides to convert to any other faith. Not knowing something like that or expressing an opinion contrary to that is stupid.

What other stupid things has he done since assuming office in January? Where does one start?

He bowed to the king of Saudi Arabia when no President, nor the U.S. flag, is ever permitted to bow or dip to any other head of state.

He doubled the national debt.

He announced the termination of the space defense system the day after the North Korea launched an ICBM.

He told the Mexicans that the violence in their nation was our fault.

He has begun to nationalize the nation’s auto industry and healthcare system.

He has demonized insurance companies, Fox News, Rush Limbaugh, and the coal and oil industries on whom we depend for electricity and for transportation.

As for Madame Pelosi and Sen. Reid, it is doubtful that the Congress of the United States, in its long history, has ever been led by two more stupid people to take up space in a Capitol elevator.

When asked for the Constitutional authority that justifies the proposed healthcare reform bill, Madame Pelosi was unable to cite any…because there is none. She has unveiled a health reform bill that would cost $894 billion over 10 years and includes a public option. This is on top of the $787 billion “stimulus” bill that, if the rising unemployment figures and foreclosures mean anything, has not stimulated anything.

Both Pelosi and Reid are trying desperately to pass two of the worst ideas to come before Congress in decades, the “reform” of healthcare in America and the imposition of a bizarre “cap-and-trade” scheme designed to sell “carbon credits” in order to avoid a natural global warming that stopped ten years ago.

Both these loathsome politicians assume you are too stupid to know what makes sense and what does not. I have lost count of how many times they have changed the names of various pieces of legislation in an effort to make them more palatable despite the stink that rises from their texts.

Their favorite pieces of legislation will ensure that Democrats become an endangered political species in 2010.

This brings us back to the stupid versus evil question. Both proposals (and others) are stupid, but both will also result in a great deal of evil in the lives of people who will not receive medical treatment and who will see their energy bills rise for no good reason.

For a complete list of the most stupid people in Congress, just check out the members of the Congressional Progressive Caucus, the Congressional Black Caucus, House Democrat Caucus, Congressional Climate Caucus, as well as the Renewable Energy and Energy Efficiency Caucus. Yes, there are other caucuses of note, but too many to list here.

Now, before I am accused of indicting the entire Congress, let it be said there are, sprinkled among the dimwits, a number of fine, intelligent men and women who got elected.

As for the White House coven of witches and warlocks, it is pure speculation which among them is the most stupid. We already know who’s the most evil, but speaking or writing his name can occasion grief; his initials are Rahm Emmanuel, a close advisor to the most stupid President to hold that office since Jimmy Carter.

And then, of course, there’s Vice President Joe My-Foot-is-in-My-Mouth Biden, a constant embarrassment to the White House because he occasionally and inadvertently tells the truth. The rest of the time, however, he is clueless.

Being forever the optimist, I am following the daily countdown until the 2010 midterm elections and the end of Obozo’s first and last term.
Posted by Alan Caruba at 12:25 PM

I VOTE FOR BOTH!

Great picture! She looks to be absolutely certifiable. Oops ...maybe she is!

The question is do the American public know and understand all this? And are they willing and prepared to acknowledge the facts.And then act on the information.

I'm with Necromancer. I long ago lost any faith that Congress/Government would govern on Constitutional principles. They're not necessarily dimwitted, but they certainly are barking mad in their lust for power.
As for the voters..... I'm praying more regularly now.

The frightening thing is that the American people voted these dimwits into office. They did this while they had all the resources in the world to check out these dimwits, yet voted them in anyway! That is scary!

Not only did the American People vote these morons into office, they KEEP re-electing them.... yesterday, I heard someone say that they expect Pelosi will be re-elected despite the fact that most of the rest of the country knows she's useless. Apparently, they are just so liberal out there that they will continue to elect or re-elect anything liberal ... regardless of the consequences. I'd love to see this proven to be wrong, but I'm not hopeful.

I got this in a reply message from an old HS friend. This is the way these people think.

George Bush almost single-handedly destroyed this country when he lied about weapons of mass destruction and got us in that Iraq war that cost of trillions of dollars. Then, under his watch, he did nothing to stop the crazy housing market, which has done unbelievable damage to our economy and has cost this country many jobs. Social security checks did not increase because the cost of living did not increase: Some things cost more now, but most cost less.

In fairness, Obama did inherit a mess...but he then compounded it by doubling the national deficit, permitting government borrowing and spending programs (the fed simply prints money, borrows the rest)and is advocating economy-killing taxes on energy, trying to seize control of the private healthcare system, while throwing billions at a General Motors that should have been allowed to fail. Did I mention demonizing the insurance indusry with its "huge" 2% profit margins?

Had he come into office and declared that the federal government was going to be ordered to cut back on spending, the tax rates were to be reduced, and some banking institutions assisted in order to avoid collapse of the entire financial system, then folks would have a lot more confidence than they do now.

Had he come into office and then not appointed tax cheats and total wackoes to cabinet and "czar" posts, we would have cut him some slack.

Now few want to do that and with good reason.