The Muslim House of Mirrors 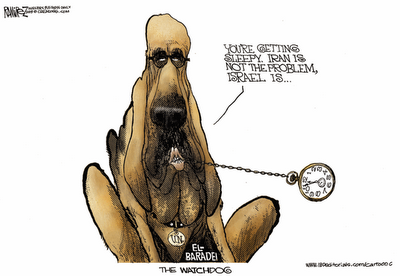 The problem with living in a house of mirrors is that everything you see is in reverse polarity. There is no way to come to grips with anything resembling reality.

A case in point is the recent announcement by Mohamed ElBaradei, Director General of the International Atomic Energy Agency (IAEA) who said, “Israel is the number one threat to the Middle East.” He was referring to its nuclear arms.

ElBaradei had just arrived in Iran for talks with Iranian officials who have lied about their nuclear program since it began. Nobody believes the Iranians are enriching uranium or plutonium or whatever for “peaceful purposes.” Nobody doubts that the Iranians, once they can put a nuclear warhead on top of a missile, will do so and very likely launch it at Israel.

But as far as ElBaradei is concerned, the number one threat is Israel.

Let’s briefly review some of the hostilities which have occurred in the Middle East. Hours after Israel announced its independence on May 14, 1948, it was attacked by Egypt, Lebanon, Syria, Iraq and what was then called Transjordan. Their intention was, in their words, “a war of extinction.”

There were wars against Israel in 1967 and 1973. In November 1975, the United Nations passed a resolution that “Zionism is racism.” Prior to and during this period, Israel was subject to constant acts of terrorism. Among the most famous was the September 5, 1972 murder of eleven Israeli athletes at the summer Olympic Games in Munich.

After years of Katyusha rocket attacks from Lebanon, in 1982 the Israelis invaded to protect their citizens. They had to do this again in 2009 when, after years of rocket attacks from Gaza, they were compelled to invade a territory from which they had unilaterally withdrawn and turned over the Palestinian Liberation Organization (Fatah). Instead, Hamas, another Palestinian group drove out Fatah at gunpoint.

The founder of the PLO, Yassir Arafat’s idea of peace with Israel was summed up in the “Intifada”, a long series of suicide bombings and other attacks on Israel. The “second” Intifada followed Israel’s signing of the Oslo Accords!

Israel, however, wasn’t the only nation in the Middle East having to fight wars. A long, bloody civil war raged from 1975 to 1990 in Lebanon between the Muslims and Christian factions that had fashioned a peaceful democracy until Hezbollah, a tool of the Iranians, showed up.

During the 1980s, having fought Iran for eight years to a stalemate, Iraq’s Saddam Hussein invaded Kuwait in 1990. Initially repulsed in 1990-1 by a U.S. led force, the decision was made to rid the region of this despot. America and “a coalition of the willing” invaded Iraq in 2003.

Following 9/11, America invaded Afghanistan to drive out Al Qaeda and the Taliban. The decision to stay or leave is being evaluated by the Obama administration.

Did I mention that Muslim Pakistan has waged three major wars, one minor war, and numerous skirmishes against India?

But Israel is “the number one threat to the Middle East” according to the longtime chief of the IAEA.

This is the house of mirrors in which the Muslims, Arabs and Persians, of the Middle East see the world. Everything is in reverse.

Tiny Israel is declared the big threat, but nations that have been at war with it and with each other are not.

And while the United States, Europe and the United Nations dithers, the Iranians are building nuclear weapons. This isn’t an issue of another nation joining “the nuclear club.” It is about the annihilation of Israel and suicide by default when it becomes America’s and Europe’s turn.

I hope and pray that Israel destroys Iran’s nuclear weapons facilities and that the United States joins them, refueling their bombers and ours. Israel’s motto is “Never again” and ours should be “Enough!”
Posted by Alan Caruba at 12:34 PM