Every Day is Groundhog Day in the Middle East 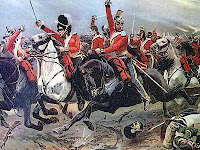 In the movie, “Groundhog Day”, the main character wakes up day after day, trapped in the same events, desperately looking for a way out of that living nightmare. It’s a very good metaphor for the Middle East.

Here are some quotes from a book whose title I will reveal in a moment:

“The only truly transcendent law in the Middle East is that of unintended consequences.”

“His fighters secured control of key rivers, recaptured Kut, and on (date withheld) stormed victoriously into Baghdad. Still undecided was how this famous city—and, indeed, most of Mesopotamia—would now be governed.”

“I suppose we have underestimated the fact that this country is really an inchoate mass of tribes which can’t as yet be reduced to any system. The Turks didn’t govern and we have tried to govern…and failed.”

And finally “Our armies have come into your cities and lands not as conquerors or enemies, but as liberators.”

All this and more was said in the 1920s by British imperialists. If it sounds like things being said by Americans, then you must assume that America has been repeating all the mistakes of Great Britain in the exact same places.

The book being quoted is “Kingmakers: The Invention of the Modern Middle East” by Karl E. Mayer and Shareen Blair Brysac ($18.95, W.W. Norton, softcover) and its five-hundred pages are devoted to the extraordinary personalities of the 1920s who, believing it was Great Britain’s duty was to bring civilization to India, Africa, and the Middle East, devoted themselves to “Pax Britannia”, the rule of distant colonies representing a fourth of the world’s population.

The book is a reminder that whatever passes for modernity in the Middle East has generally been imposed by the process of European colonization in quest of its oil and other riches to fatten the profits of various British, French, and American business enterprises such as the Suez Canal and the oil companies.

Left to themselves the polyglot of tribes would never have experienced anything resembling modernization.

Afghanistan today would look very much the same to the earliest invaders and explorers who passed through it. No roads. No hospitals. Few schools. No jobs except raising poppies for the heroin trade or serving in the army or police. Men raised from youth to fight anyone and everyone. Pushtuns, Tajiks, Hazarus, Uzbeks, Turkmen, and Qizilbash.

The Middle East had been ruled by the Turkish Ottoman Empire for centuries—from Egypt to Persia. Going back even further in history, the region was no stranger to European invasions. The Crusades were a response against the Islamic invaders that at one point had laid siege to Vienna.

As the authors note, “In his history of Jerusalem, the Israeli writer Amos Elon calculates that over four millennia the Holy City has known ‘twenty ruinous sieges, two intervals of total destruction, eighteen recent reconstructions, and at least eleven transitions from one religion to another.” In 1967 visitors could find the remnants of “Roman encampments, Crusader castles, Turkish parapets, and British pillboxes.”

To suggest, for example, that after more than sixty years of Israeli national sovereignty that Arab neighbor nations (and Iran) have the slightest intention of allowing it to exist is to ignore the history of centuries old intolerance directed against both Christian and Jew.

Following World War One, England and France divided the remains of the Ottoman Empire that had chosen to side with Germany. It would have died sooner or later of its own dead weight, but it was Sir Percy Zachariah Cox who would take out “a map and a pencil to draw the boundary between Iraq and the Nejd (now Saudi Arabia). The borders with Syria and Transjordan were defined similarly.”

There were Arab leaders, but they were generally the pawns of the great powers, frequently assassinated or deposed. With some exceptions, the nations of the Middle East continue to be ruled by monarchs and despots.

As the British Empire shrank in the wake of World War Two and American power grew only one thing is clear. Neither of these imperial powers had any clue, nor way of dealing with the Middle East’s regressive Islamic fanaticism that remains a ceaseless threat to Western civilization. And, as in past times, the debates rage about staying in or getting out.

Every day in the Middle East is Groundhog Day.
Posted by Alan Caruba at 5:30 PM

Alan:
Leave us not forget that it was the very same British who arbitrarily drew the lines of demarcation that now bound the "Countries" of Iraq, Iran, Afghanistan, et al.
In leaving, they found it necessary to leave a footprint.
Arrogance, I suppose, even in the face of a tactical defeat.
It's tough to fight a shadow enemy.

Understanding the Ottoman Empire is central to understanding this area of the world. Islam only understands power. All else is weakness. That is how it was spread initially. This is what the Koran teaches and this is how it is being spread now. The imposition of Sharia by force!

The problem among the Muslim peoples is that they don't agree with each other…even how to interpret Sharia. They are broken down into groups that are just as likely to kill their own Muslim “infidels” as they are to kill everyone else, whom they consider infidels.

This type of radicalism has existed in the past, and the Ottoman Empire would tolerate it for a while, until they decided that enough was enough and then they killed them.