Saving the Earth by Hating Humanity 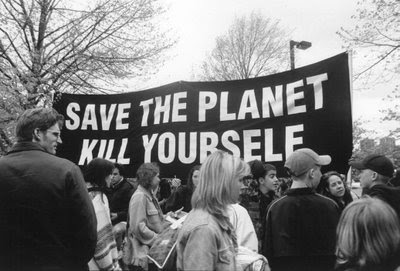 As the greatest hoax of the modern era, “global warming”, bites the dust around the world, it behooves us all to contemplate why environmentalists—Greens—would attempt to hoodwink the world’s population into believing they could do anything to “control” the planet’s climate.

One singular fact stands out in all Green propaganda and permeates all the legislation and other programs they sponsor. It is a contempt and disdain for the Earth’s human population. The leaders of the movement hate humanity. Obsessed with population growth, anything that can reduce it—disease, poverty, famine, or lack of energy is pursued as part of the Green agenda.

The Green movement grew out of an earlier, more salutary one, conservation. We can surely thank Americans such as John Muir and others who sought to preserve tracts of wilderness such as Yellowstone and the nation’s forested areas from the rampant depredations of the 1800s and early 1900s. The nation owes a debt of gratitude to President Theodore Roosevelt for the initial creation of national parks and forests.

As the nation industrialized, rivers suffered pollution and the air was polluted by factories that befouled both. In 1970 President Richard M. Nixon signed into being the Environmental Protection Agency which, empowered by the Clean Air and Clean Water Acts, can be credited to early success.

However, like all government agencies, the EPA has steadily sought to expand its powers and, aided by other environmentally related agencies such as the Fish and Wildlife Service and the Corps of Engineers, it has relentless pursued ever larger control over all the land and waters of the nation, and by extension over everyone’s life.

They pose a threat to the constitutionally protected right to private property, vital to the nation’s economy and a keystone of capitalism.

The growth of literally hundreds of “environmental” organizations has led to an endless barrage of scare campaigns, often without any basis in science, and used to undermine the industrial, agricultural, and transportation sectors of the nation’s economy.

On a global scale, the United Nations Environmental Program and its Intergovernmental Panel on Climate Change have pursued an agenda devoid of scientific merit or justification.

Greens lie and they lie all the time

The lies about Alar came close to wrecking apple growers. The lies about the spotted owl species laid waste to the northwest’s timber industry. New claims about alleged dangers from plastic bottles are based on lies.

The lie that carbon dioxide, a greenhouse gas, has anything to do with “warming” has driven the totally deceitful “global warming” hoax and is used to create a market for worthless “carbon credits” that ultimately increase the cost of energy and everything else.

The introduction of the Endangered Species Act is one long history of near constant failure in pursuit of a foolish goal, advocating for obscure species while thwarting all manner of projects useful to the human species. It has been used to impoverish farmers in Oregon and California.

The truth is that the Earth is actually cooling, not warming. Carbon Dioxide is not a “pollutant.” The North and South Poles are not melting. Sea levels worldwide are not rising any more than they have for millennia. Polar bears are thriving. Solar and wind energy is a bust, providing barely 1% of all electricity used daily nationwide.

The truth is that pesticides protect people against insect and rodent-borne diseases and property damage. Saving “endangered species” ignores the fact that 95% of all the species that previously existed are now extinct.

The truth is that nothing humans do has any affect on the climate that is dependent on solar and ocean cycles.

The Greens are now famous for their campaigns against products from toilet paper to plastic bags, bottles, and everything else made from plastic, a petroleum derivative. Anyone who buys “environmentally” approved products is being charged a premium for their own gullibility. Every supermarket and store in America has comparable, safe products at far lower costs.

Americans are constantly harangued to adopt Green lifestyles. Generations of young Americans have suffered the child abuse of being told that the Earth is doomed despite its 4.5 billion year existence.

Corporations that advertise and promote their “Green” credentials pander to environmental hoaxes in order to avoid criticism and generate an “environmentally friendly” public image.

The real environmental message speaks to a hatred of humanity and the many technological, medical, agricultural, and other achievements that have enhanced, improved, and saved the lives of millions.

If you hate energy, join an environmental organization.

If you hate science, join an environmental organization.

If you hate jobs in America, join an environmental organization.

If you hate industrial and agricultural development and progress, join an environmental organization.

And if you hate humanity, join an environmental organization.
Posted by Alan Caruba at 4:36 PM

I haven't seen lots of, or any for that matter, greenies killing themselves, expecting their self-sacrifice to take some of the load off mother Gaia. As such, I've always doubted their honesty and commitment.

Here in Grants Pass an irrigation dam (Savage Rapids Dam) on the Rogue River was removed this past week. The event made it to MSNBC and the 'greenies' are all agog and hugging each other. "We're going to save the fish!"
I live in Grants Pass, the location of the former Savage Rapids Dam. I have lived here over 30 years and have fished the Rogue from Gold Beach on the coast to Shady Cove in the foothills of the Cascades. The dam had no harmful effect on fish runs as there was a very adequate ladder around the dam. In fact, the fish ladder at the dam was easier for fish to navigate than getting over Rainie Falls below Galice. I do enjoy the view of the river more with the dam gone and I look forward to floating my drift boat and raft through the area, but its removal will have no measurable effect on salmon or steelhead runs. So, while we can get all warm and fuzzy about "rivers running free", the dam vs. fish was a non-issue as are most panic stricken efforts by so-called 'environmentalists'. The first and still foremost conservationists are fishermen and hunters. Of course, we are anathema to all self serving members of bogus environmental groups. These people should be reminded that it was fishermen and hunters that first initiated rules and regulations for hunting/fishing seasons and limits to preserve fish and game, and continue to do so. We regulate only ourselves, not the world at large.

Leading to the most potent bumper sticker of the day:

...and PS, note that the BBC, in the past guilty of climate alarmism for decades has carried this article with the headline...

"What happened to global warming ?"

Great article Alan, I will be linking it this week in my newsletter.

I would like to expand on the extinction issue. Greenies howl that there are between 70,000 and 130,000 species becoming extinct every year.
They don’t know how many exactly there are, and they don’t know which ones that are becoming extinct either. Why? Because they can’t find them, and they have never shown that these alleged species have ever existed in the first place. Where did these figures come from then? They are guess work (estimates) based on deforestation rates. Only the world’s forests are not being depleted, and in point of fact they are increasing in size…and we can thank Norman Borlaug (who the greenies hate) for much of that because his Green Revolution requires so much less land to grow so much more food.

All the rest that the greenies claim are disappearing are nothing more than electrons swirling around in their computers.

I recently posted an article by Wendell Krossa on my blog, Paradigms and Demographics, dealing with the myth of forest depletion for those who would like to explore this further.

I honestly thought this was a joke when I began reading it, but you people actually believe this crackpot?
There is scientific proof of what environmentalists say is happening to the environment, contrary to what you may believe, and I'm pretty sure they have a better idea of what's happening than you do. Please find some credible sources and cite them if this is what you're going to pollute the internet with.

Sorry, Stacy, but you are an example of those who have accepted the Green lies and have not bothered to check them out.

Go to the links on my site and visit iceagenow, climate change fraud,Climate depot, and other sites that will provide facts, not the lies of Al Gore.

When the BBC asks "Where is global warming?" maybe you should too.

Stacy:
First of all I'm sorry that you have been so grossly misled by Al Gore and Obama, two of the more well known true crackpots.
Even the IPCC bureaucrats have grudgingly admitted that there has been no measureable increase in the earths median temperature over the past decade. Also, CO2 is not a poisonous gas or a pollutant. It is vital to all plant life. No CO2pretty soon all die. If you doubt this, research Plant Biology 101.
Perhaps you would care to peruse the following list of SCIENTISTS, who are representative of some 31,000 scientists who are labeled as "deniers".
All of the scientists listed here have blogs where you can contact them.
S. Fred Singer--first Director of the National Weather Satellite Service and Professor Emeritus of Environmental Science at the University of Virginia

Dr. David Bromwich--President of the International Commission on Polar Meteorology

Prof. Freeman Dyson-- another of the world's foremost physicists

Dr. Richard Lindzen--Professor of Meteorology at Massachusetts Institute of Technology and member of the National Research Council Board on Atmospheric Sciences and Climate

Dr. Habibullo Abdussamatov--head of the space research laboratory of the Russian Academy of Science's Pulkovo Observatory and of the International Space Station's Astrometria Project

Dr. Richard Tol--principal researcher at the Institute for Environmental Studies at Vrije Universiteit and Adjunct Professor at the Center for Integrated Study of the Human Dimensions of Global Change at Carnegie Mellon University

Dr. Eigils Friis-Christensen--director of the Danish National Space Centre, Vice-President of the International Association of Geomagnetism and Aeronomy

Dr. Edward Wegman--former Chairman of the Committee on Applied and Theoretical Statistics of the National Academy of Sciences.

Geeez Alan ... you and Buzzg are so obsessed with those pesky facts.

Whatever you do, please quit upsetting Stacy ... she's really stressed out over this whole thing, and presenting her with a dissenting viewpoint could really make her brain hurt ....