The Swine Who Live to Scare You 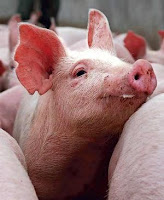 For a very long time I have made my living as a business and science writer. That profession tends to make one fond of facts. It’s the reason my blog’s URL is “facts not fantasy” and why I call it “Warning Signs.”

It is the reason I founded The National Anxiety Center in 1990 as a clearinghouse for information about “scare campaigns designed to influence public opinion and policy.”

We live in a world of competing lies, all swirling around us and generated by government and what are now called “non-governmental organizations.” These NGOs suck at the government’s teat or insert themselves into larger organizations such as the United Nations in order to steer them in directions that will fatten their purses and wallets.

These are the swine who live to scare you because they know this is the way to benefit from your ignorance, gullibility or because you will not take the time to check out the “facts” they are telling you, using them like cattle prods to make you and others move in the direction they want.

All of which brings me to the Swine flu or its more politically correct name, H1N1. It is another variant of the flu that goes around the world every year. Do you remember the Bird Flu that was supposed to kill millions, but didn’t? Or what about the regular seasonal, but unnamed flu that kills an average 36,000 Americans every year?

So one is compelled to ask why the United Nation’s World Health Organization or the U.S. Centers for Disease Control, along with the idiot who is our current Secretary of Health, are all doing their best to convince everyone that a worldwide “pandemic” is occurring when it clearly is not?

My friend and colleague, Michael Fumento, arguably one of the best investigative writers in America, had a commentary about the Swine Flu in the October 8th edition of the New York Post. “The real threat is panic” neatly slices and dices the lies about the Swine Flu, citing data from around the world to demonstrate that “There is no flu epidemic.”

There is the seasonal flu and I take this to be a good reason to avoid the rather hastily created vaccine for the Swine Flu in preference for the regular one that’s widely available. And, yes, I did get my annual shot.

It strikes me that scaring enough people to take the Swine Flu vaccine is very much a part, if not the whole purpose, of the whole orchestrated effort to panic people. If this is not accomplished, those spreading the misinformation about the Swine Flu would be in for some severe condemnation. This way, they can clam they were just doing their job to protect the public.

The Swine Flu panic comes out of the same box of tricks that tells people that drinking anything from a plastic bottle will eventually kill them if old age doesn’t get them first. It’s the same foolishness that warns against taking vitamins and minerals to supplement the body’s need for them.

It’s the same lies that try to get people to stop eating meat, drinking soda, or that there’s an obesity “epidemic” in America where food is not only fast, but cheap and tasty. Meanwhile, you can pick up Le Big Mac in Paris’ famed museum, the Louvre, these days or in downtown Beijing.

With a lifestyle that has extended the average life expectancy in America from age 43 in 1900 to 78 today; the government seems desperate to get people to die off at an accelerated rate before Social Security and Medicare goes broke even sooner than expected.

Naturally, in the bizarro world in which the Democrats live, they are trying to enlarge the number of Medicare recipients so that life-saving procedures can be denied to even more of them.

Only children singing the Obama song believe anything the government tells them. The rest of us would do well to assume it is mostly lies.
Posted by Alan Caruba at 6:39 PM

Yes, Alan, I'm also opting out of the "panic" vaccine. Like you I did take the seasonal variety. I have little contact with children who are the usual ones to pass along the bug.

Thank you for an article that was warm and fuzzy; it's a welcome relief from all the gloom and doom that abounds these days.

I've read recently that even the
"36,000" number of yearly deats is overinflated by adding in other infections...so as to scare us all into getting the "regular" flu shot...which more often than not isn't even the right "variety" for the flu that ends up circulating.
Vaccines in general are over hyped.
Since the 60's or 70's the only cases of polio in the US have been directly LINKED to the vaccine. World wide cases were already declining by the advent of mass vaccination & now the original "live" vaccine is linked to a VERY rare form of cancer...
Hmmm. It is too bad that we are so often fed the line that the government wants us to believe.

Alan, I really would ask you to do greater research on the regular flu vaccine. You state you get that flu vaccine. Please do some research and consider what is being put into your body. Looking forward to more of your blogs!