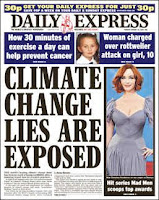 The headlines report the way the Intergovernmental Panel on Climate Change has been lying and some, myself included, are calling for an end to this snakes’ nest of global deception.

I keep waiting for some environmental group to announce that the Earth is running out of oxygen. It’s the kind of huge lie that environmentalists of every description engage in. There’s plenty of oxygen and, despite the latest lies about carbon dioxide (CO2), the great oceans of the world are not turning into reservoirs of acidity. Together these two gases are the basis for all life on Earth.

If you remember nothing else, remember that any reference by anyone to “greenhouse gas emissions” involves the lie that they influence the weather or the world’s climate.

Since 1988, when the United Nations created the Intergovernmental Panel on Climate Change (IPCC), the vast global warming hoax existed for two purposes, the enrich those involved and to impose a one world government. The effort required mobilizing the leaders of nations to spread the word that the planet was dramatically warming and that carbon dioxide was the cause.

One has to marvel at the audacity of this scam. There were so many parties that had to be involved that it boggles the mind to consider that a mere handful of alleged “climate scientists” who created the computer models and provided the falsified data were able to corrupt so many real scientists into collaborating. The prospect of vast amounts of governmental and foundation funding made the process easier.

The scientists who spoke out against it were labeled “deniers”, but they were the truth-tellers and it took years of effort, culminating in four international conferences to debunk the global warming hoax. It was not, however, until November 2009 with the leak of the conspirator’s emails that the truth became widespread.

This evil scheme was supported and continues to be supported by many world leaders. President Obama traveled to Copenhagen in December 2009 to participate in a UN conference that was intended to impose one-world government and more recently the Secretary of State, Hillary Clinton, made mention of “climate change”, the code words that replaced global warming.

The IPCC was so successful that at its height in 2007 it shared a Nobel Peace Prize with former Vice President Al Gore. This prize is now so worthless that future recipients may not wish to be so honored.

To suggest, however, that climate change is influenced by too much carbon dioxide lacks all scientific merit. There simply isn’t enough CO2 in the Earth’s atmosphere to have any impact.

The single most powerful determinant of the Earth’s climate was and is the Sun.

Putting aside the United Nations’ never-ending effort to exert authority over all the nations and all the peoples of the world, global warming was about an audacious scheme to monetize carbon dioxide; to sell “carbon credits” and, by doing so, enrich those who were behind the scheme.

Recently, Patrick Henningsen, the editor of 21st Century Wire, penned a commentary, “The Great Collapse of the Chicago Climate Exchange”, an excellent analysis of how the bottom fell out of the scheme to buy, sell, and trade “carbon credits” based on the fraudulent claim that “greenhouse gas emissions” had to be reduced worldwide to avoid global warming.

Henningsen noted that Reuters had reported that the Intercontinental Exchange, Inc, the operating body of the Chicago Climate Exchange (CCX), “will be scaling back major operations (in August), a move that includes massive layoffs. This is likely due to the complete market free-fall of their only product…carbon emissions.” In May and June 2008, the carbon credits were trading at $5.58 and $7.78 respectively” until it finally dawned on investors that they were utterly worthless.

“Unlike most real markets,” wrote Henningsen, “the carbon market was created by banks and governments so that new investment opportunities could seamlessly dovetail with specific government policies. It’s a fantasy casino based on a doctrine of pure science fiction.”

The U.S. has thrown billions at so-called “climate research” since 1988 and has passed laws intended to reduce CO2 emissions. There is no scientific merit, nor any justification for the many limits imposed on the American consumer. The quest, for example, of ever-cleaner automobile exhausts has resulted in more expensive cars and more dangerous ones as their weight had to be successively reduced to meet the mandates.

The current governmental craze for “clean” energy alternatives such as wind and solar power will only serve to drive up the cost of electricity without significantly adding any new sources capable of meeting the nation’s growing needs. Only government subsidies and mandates keep these projects alive as opposed to coal-fired, natural gas, and nuclear plants.

The original investors such as Al Gore have long since gotten out of the carbon credits market, having known in advance about legislation and policy before the general public. What they did not anticipate, however, was the natural cooling of the Earth since 1998 as the Sun entered one of its predictable cycles of low activity.

There is no global warming. What warming occurred was entirely natural, a response to the end of a previous period of cooling that ended around 1850.

A lot of people should be sent to jail for engaging in this fraud, but they will not. The victims remain as does the drumbeat of lies about greenhouse gas emissions or claims of ocean acidification.

Every flood, hurricane, or other natural event will continue to be blamed on “climate change” until eventually even the compliant mainstream media finally stop publishing lies.

I'm no scientist...far from it...but it seems to me that a huge erupting volcano or two can easily spread more CO2, methane and other nasty stuff into the atmosphere than all of mankind has since the beginning of the industrial revolution. That's my hypothesis and I'm sticking to it!!

Excellent analysis, Alan. Many thanks for your continued sterling efforts helping to bring down the greatest scam of the century.

Thank you, John. I could say the same for your excellent reporting and efforts to expose the CO2, global warming lies.

Great commentary Alan. You have outlined the entire situation perfectly. And there are a couple of great lines in there that I am going to use in the future.

Be my guest. I will be "borrowing" some of your wisdom as well. :-)

Another excellent account of the lie that was global warming. I keep forwarding your articles so no one I know is any longer fooled into believing the incredible hoax. When are political leaders of all stripe going to come out with the truth. Believe it or not I think by 2012 or sooner this will be a hot topic used against the EPA and liberals and hopefully before that we'll see some investigations. Believe me Issa is making a list and checking it twice and when the Republicans take back the house and Senate there will be some serious investigation into the criminal activities of this administration. Whether global warming lies will be part of it, we can only hope.

Alan,
This whole Carbon Dioxide as a pollutant debate needs to placed into some contextual perspective.

Mankind here on Earth is adding to the Atmosphere a positively outrageous amount of 150 Billion tons of CO2 each and every year, and yes, that is billions, and yes, that is only the man made emission of that Gas. See how those alarmists gain traction?

Now for some perspective on that.

Wait a minute, isn't that in Parts per million.
So now the total CO2 content of the whole Atmosphere is 0.0389%, and read that again.

So, of those Greenhouse gases, the largest, water vapor, and yes, that does mean clouds, is 51 times greater than CO2.

As for Oxygen, and no, we will never run out of that, it is 530 times greater than CO2.

389PPM - a totally insignificant portion of the overall Atmosphere.
0.0389%

The second part of this comment is glossed over by alarmists, and rarely, if ever mentioned for those contextual purposes.

Alan, sorry to take so much space here.

Thanks for this. Once again it points out the obvious flawed premises of this whole boondoggle: "climate and sea level are assumed constant"....which guarantees an out for the huxters, when they can point and say..."Look! Things are changing". Of course they are, sillies. Always do!

Bedbugs and a good many other nasty pests were almost completely eradicated soon after WWII, thanks to DDT. As eco-whackos noted. DDT stays in the environment for a long time, continuing to do its valuable work, long after it ceases being applied. Its beneficial effects gradually dissipate, and when sufficiently dissipated, pests begin making a comeback, and all of the pests once controlled by DDT will return to their pre-WWII huge infestations.

Other pesticides, synthetic or natural, are far more toxic than DDT to humans and animals, (DDT has not been demonstrated to cause measurable harm to other than the pests it controlled so well.) I expect to see other terrible infestations caused by other "bugs" coming our way soon. Bedbug infestations are only the first of their kind to recover from DDT.

I am old enough to remember how it was just before and during WWII, regarding "bug" infestations. I lived on a farm near Sioux City, IA. My chores included picking the harmful "bugs" from vegetable plants, and dropping those "bugs" into an empty coffee can, which had about an inch of kerosene in it. Not the least bit of fun for a 5 year old lad.