A New Deadline for War with Iran 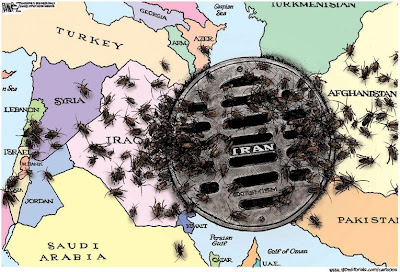 The world has a new deadline for war. It is August 21, 2010 when the Russians activate Iran’s first nuclear reactor by loading fuel.

Both the Russians and the Iranian regime have concluded that President Obama is weak and they have plenty of reason to think this. They have taken his measure since he was inaugurated in 2009. Obama has been incredibly naïve, eager to accommodate, and clearly reluctant to do anything in the Middle East other than LEAVE.

The United States has been at war with Iran since our diplomats were seized on November 4, 1979 and held hostage for 444 days.

Just because presidents since then have not wanted to say so, a state of war exists. The Iranian regime’s leadership have never lost sight of the fact that they have been at war with us.

Reportedly fearful for the fate of the hostages, President Carter never threatened the full military power of the U.S. if they were not returned and, when they were, it was on January 20, 1981, shortly after Ronald Reagan took the oath of office.

Perhaps the presidents were counseled that Iran could, if it wanted, close the straits of Hormuz, effectively cutting much of the flow of oil out of the Middle East. To put it in stark terms, 40% of the world's seaborne oil shipments flow through the straits.

In contrast to Carter, Reagan did not hesitate to put the full moral weight of the United States behind regime change when he could. When he called the Soviet Union “an evil empire” it encouraged its satellite captive nations and its internal dissident community. He called for the removal of the Berlin Wall and it fell. In 1991, the Soviet Union collapsed.

Words, however, are not enough and the absence of words sends a message, too. The failure of President Obama in June 2009 to voice support for the uprising of Iranians when they protested the rigged election of Mamoud Ahmadinejad told the ayatollahs they had nothing to fear from him.

The United States, Israel, Europe and all other Middle East nations have plenty to fear from Iran.

The essential error that administrations have made with Iran was to assume that the regime leaders are rational men who can be influenced by the standard diplomatic practices such as sanctions or inducements to play nice.

The men who lead Iran believe that they must bring about the return of the Twelfth Imam, a figure who lives at the bottom of a well and from which he will emerge on a white winged horse to scourge the world of unbelievers. It is a triumphant Shiite belief and it demands chaos in the world, unrest everywhere, and wars that kill millions to satisfy the blood-lust so central to Islam.

To assume that once they achieve their long-sought goal of being a nuclear power they will not use it will bring about the deaths of millions---starting with the Israelis.

We are dealing with mad men, lunatics, religious fanatics and they will not be dissuaded from their goal.

The Shiites are a minority among Muslims but they are the majority in Iran. The next largest group of Shiites can be found in southern Iraq. Beyond them in the greater Islamic world community are the Sunnis and they regard the Shiites with contempt and always have.

August 21 is the day to fear. The ayatollahs have been looking for signs to ensure that the Twelfth Imam, the Mahdi, is getting ready to return. The massive flooding in Pakistan, the dislocation of millions there, is surely seen as one such sign. Perhaps, too, the vast forest fires in Russia. The financial destruction of the United States is surely another sign. The Obama administration has run up debt beyond anything in the history of the nation and millions are unemployed.

In an August 15 commentary, “Obama Is Colluding with a New Fascist Imperialism”, James Lewis warns that “Nothing is more like the fascist Axis of the 1930s than Islamist expansionism today. Like the Hitler-Tojo-Mussolini Axis of the 1930s, Islamic fascists are fundamentally imperialistic, with an explicit order from on High to subjugate civilized people or turn them to ashes.”

Stop thinking like rational Christians and Jews, Hindus and Buddhists.

The Islamic Nuclear Bomb is about to become a reality and unlike Pakistan that wanted it as a defense against India, the Iranian ayatollahs want to use it against Israel and the West. That’s us!

We needed another Teddy Roosevelt, and instead elected a limp-wristed fop. A ventriloquist's dummy of recent manufacture.