On the Blago Watch 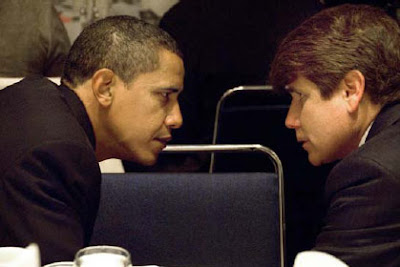 If the nation was not contending with a horrible economy, taking a deep breath of relief after the capping of the BP oil well, and not distracted by other stories in the news, I am sure it would have been riveted by the trial of former Illinois Governor, Rod Blagojevich.

If ever a trial called out to become a Hollywood movie, this one does. At the very least, a book or two should result from it.

Writing this the evening of Monday, August 9th, the jury has been deliberating since the closing arguments on July 27. When the verdict does come in, it will ignite a brief media frenzy, but a hung jury would as well.

The six-woman, six-man jury must grapple with 24 counts of racketeering, wire fraud, extortion, bribery, conspiracy, and false statements leveled against Blago. His brother, Robert, who administered the campaign fund in the last months of 2008, is charged with four counts of wire fraud and extortion.

In essence, however, Blago is charged with trying to “sell” the appointment to the vacated Senate seat of Barack Hussein Obama, elected president in 2008

In closing arguments on July 27, Blago’s defense attorney, Sam Adams Jr., described him as “insecure”, “silly” and “not the sharpest knife in the drawer.” His defense strategy was that Blago was too stupid to be guilty of the charges against him.

The jury, however, was made aware that Blago had been an attorney before being elected governor, so one might assume he had some knowledge of the law. Whether he had knowledge of ethics, morals, or other virtues we hope to find in our elected representatives is anyone’s guess.

Listening to some of the wiretapped tapes the government played seem to confirm his attorney’s low opinion of his client’s IQ. He portrayed Blago as someone with “absolutely horrible judgment in people”, a variation of the “he’s too stupid to be guilty” defense.

This is probably an advantage when it comes to Chicago politics where some contend the whole system is corrupt from top to bottom. Better, perhaps, to just think well of one’s fellow politicians than contemplate their sins.

There’s something of a tradition in Illinois for this. Three former governors have gone to prison in the past 35 years. Two Democrats, Otto Kerner and Dan Walker, and one Republican, George Ryan, convicted in 2006 by a federal jury. Ryan had been governor from 1999 to 2003. A total of 79 state workers and lobbyists were charged along with Ryan and 75 were convicted.

The attorney for the federal government, Reid Schar, had a different impression of Blago. He told the jury that he was a “practiced communicator” and reminded them that he had twice been elected governor of the nation’s fifth-largest state.

Lawyer Adam contended that the phone calls in which various choices for the Senate vacancy appointment were discussed along with the strategies to fatten Blago’s campaign fund were just so much jabbering, a bit of gossip between the two brothers and others.

At one point Blago even tossed out Oprah Winfrey’s name for the job. The prizes he sought in return for the appointment were a wish list that included a position in Obama’s cabinet, a possible ambassadorial appointment, and other notions too idiotic to mention. Manifestly unfit for any—-just ask his lawyer—-Blago seemed dazzled by the opportunity.

In the end, a Chicago attorney, Roland Burris, was given the appointment and he too felt some heat thereafter for a lapse of memory.

I won’t venture to guess the outcome of the jury’s deliberations, but given Illinois’ track record of crooked governors, it does not look good for Blago The “too stupid to be crooked” defense does have some merit if for no other reason than its entertainment value.

I have ceased to be amazed at the low caliber of people elected to high office. We seem to be in an era of truly awful politicians at all levels and we take heart from the few who seem to stand for something other than their own self-interest and enrichment.

There's an interesting video that examines why the trial is lasting as long as it is.
http://www.newsy.com/videos/blagojevich-trial-jury-dead-locked/

In a perfect world, this would be a *Caption This* post...

That would be MY offering.. :)

The problem with government in a healthy society is that there isn't really much need for it.

When things are running smoothly, governing is a pretty boring job, and doesn't attract people of high caliber. When a government is allowed to mushroom into the disastrous size it has in America, the quality of the politicians decreases in proportion, and the potential for graft and corruption increases.

We've almost hit the limit, both in size and levels of corruption with our government today. Basically, we have one person in government for every citizen in this country now. It's a ratio that cannot continue to exist if our society is to remain healthy.

I don't know if there has ever been a society in history that has been able to scale its government back from this point without anarchy, chaos, or a revolution.

We've got a history of achieving the impossible in America. Let's hope we can do it again ...