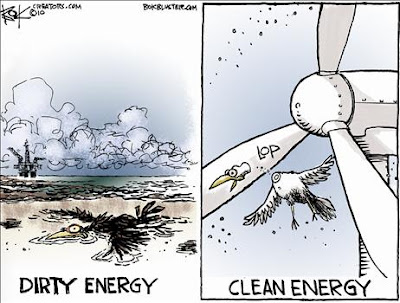 Since his election, New Jersey’s Governor Chris Christie has been remarkably successful in dealing with the Democrat controlled state legislature and has rocketed to national fame for simply being the real deal when it comes to conservative politics and policies.

That is, until he signed a bill on August 19 that one columnist described as touting “the idea of raising your electric rates to place windmills in the ocean off New Jersey.” In this case the windmill would be 75 feet taller than the Statue of Liberty! None of the residents of Union Beach want a windmill no matter how far out in the Atlantic it’s built.

So-called alternative or renewable energy is always far more expensive than the kind generated by nuclear or coal-fired plants.

It is always more unreliable insofar as the wind does not blow all the time, thus requiring a traditional plant to be online to back up those ugly insults to the natural beauty of land and sea when they fail to feed the grid.

Few people know that, even without wind, the windmills must be kept turning, using electricity to avoid mechanical failures.

Gov. Christie signed a bill that would put the windmill so far out at sea it could not be seen from the land, but that ignores the fact that it will cost taxpayers $7 million to construct it, half of which will be paid by a federal grant, and the result will be an increase in consumer rates. Why would any sensible person want to spend that kind of money on a single windmill?

Part of the answer is something called the Renewable Electricity Standards (RES) that the U.S. Senate is contemplating. As Dr. S. Fred Singer noted in an August American Thinker.com commentary, “It would force electric utilities to generate a large and increasing percentage of their power from wind and solar—rising to 15% by 2021.” In other words, the U.S. Senate is about to select winners and losers in the energy marketplace by requiring utilities to use expensive and inefficient wind and solar power.

If wind and solar were so wonderful, why can’t either of these energy producers even exist without a federal mandate?

Even worse, these two bogus forms of energy exist on the basis of a complete lie; that they reduce carbon dioxide emissions and thus will save the planet from global warming. Only there never was a threat of global warming and the planet has been in a natural cooling cycle for a decade!

The whole wind and solar business is a gigantic rip-off and will inevitably cause consumer rates to rise for all the reasons cited above. Just as Obamacare is already causing insurance rates to skyrocket, so will the implementation of Renewable Electricity Standards.

In France, Germany and Italy they are already in the process of backing away from subsidizing this idiotic form of energy production.

According to the American Wind Energy Association (AWEA), only 700 MW (megawatts) were added to the nation’s electricity grid in the second quarter of 2010 and wind power installation to date this year has dropped by 57% and 71% from 2008 and 2009 levels.

Little wonder AWEA is “calling on Congress with an urgent appeal to put in place a strong national renewable electricity standard to spur demand for renewable energy...”

Spur demand? That’s not going to happen without the coercion of federal intervention.

No one except the manufacturers and owners of the windmills like windmills. This includes environmentalists! In June environmental and watchdog groups filed a lawsuit in Boston to stop a windmill farm off Cape Cod charging that it would violate federal law by endangering protected migratory birds. The suit says that “science was manipulated and suppressed for political reasons.”

The entire alternative, renewable, and green energy scam is based on “science” that is utterly false, beginning with the claim that CO2 has any effect on the climate and that emissions must be reduced.

I do not know how long it will take to ultimately return this nation to the sanity of producing electricity with cheap, abundant coal, with natural gas or, best of all, with nuclear plants, but unless we do that the nation can look forward to rolling brownouts and blackouts because the population keeps growing and the need for more electricity increases with them.

Klaus and Bolander wrote a book called, “Ecological Sanity”, outlining what was seriously wrong about all the so-called scientific studies that the greenies within the academic community promoted, including those on DDT.

In the book they say that we accept any attack against DDT without thinking critically about these statements because we have been “psychologically prepared” by the constant repetition of these same lies year after year.

Wind power is just one more lie that fits this mold. We have been psychologically prepared to believe that just a few more million will do the job….a job that has not been done in the past and will not do it in the future.

Even the greenies realize that wind power is a disaster to birds and bats. If one pesticide killed a fraction of the bats and birds that windmills are killing right now we would hear a scream go up from these people that would send a chill down everyone’s back. And it is all the media’s fault.

Being a liar is one thing. For the media to support liars when their job is to destroy lies is another.

Fancy the content I have seen so far and I am your regular reader of your blog.

I am very much interested in adding http://factsnotfantasy.blogspot.com/ in my blog http://nasa-satellites.blogspot.com/.

I am pleased to see my blog in your blog list.

Hope to see a positive reply.

Thanks for visiting my blog as well !

Waiting for your reply friend !!!!!

Once again, Alan has written a precise and elegant rebuff to the madness and stupidity of allowing the government to mandate, moderate, oversee, predict or in any other way become involved in anything other than the most rudimentary and simplistic of endeavors. If America had forged ahead years ago with a nuclear electrical power system and told the naysayers, commies and haters of America to shove it, we would be self sufficient in that area today with a clean and dependable power system and could now be developing alternate systems in a sane and rational manner without the huge disruptions and grid failures we are surely confronted with for the foreseeable future.
I would like to add that China is now the world leader in nuclear power and they are expected to have built around 22 reactors in the five years ending 2010 and projected to build 132 units after and they have the most aggressive nuclear power expansion program in the world. And Governor Christie wants to spend 7 million on one wind turbine that doesn't produce zip when the wind is calm and will probably end up costing 25 million with union cost overruns and all the graft, corruption, theft and payoffs that are always associated and a part there of anything the government is involved with. If the truth were known, Christie is probably somehow personally gaining from this latest Government rip-off/boondoggle.... Bottom line, he’s just another sorry ass politician looking for a piece of your pie….

Alan,
I know that it might seem a little presumptuous of me to link into one of my own posts at another site, but I have been blogging for two and a half years now on the futility of Renewable Power to supply the electrical power that is needed absolutely, that being for 24/7/365, something only coal fired power and Nuclear power can do.

The latest post on just that subject explains how that the U.S. while having the largest installed capacity of Wind Power on the Planet, still has that source providing just over 2% of the total consumed power in the U.S.

The rolling average of power supplied vs the possible Total is barely 25%, which equates to around 6 hours a day on average.

The cost is horrendous for what is at best marginal power.

The link to that post is as follows:
http://wp.me/pJrS-aTI

As usual Alan you are right on the money. I did a lot of research on solar/wind power a few years back with the idea in mind of generating my own power for my home. Looking at just the enormous cost it became clear that it made no economic sense whatsoever. It would never pay for itself before the system elements would have to be replaced. Solar panels, wind generators, batteries and inverters don't last forever.

There is no justification for what the government is forcing utilities to do. The only possible justification for having it at your own home would be so you would have power if the grid ever went down. Given the vulnerability of the grid it may make sense to have some kind of small back up system like that so you can power some lights and a refrigerator, etc. Barring that scenario it's simply not justifiable.

Not presumptuos at all, Tony. Your link is welcome and I hope others read your post.