Saying No! to a Ground Zero Mosque 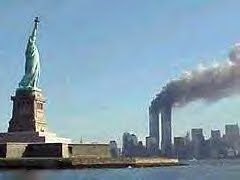 In the August 3rd edition of The Wall Street Journal, in the Greater New York section, the lead article was “9/11 Memorial Pledged as Part of Mosque Plan.”

There already is a 9/11 memorial. It is called Ground Zero and will be incorporated into whatever structure that eventually gets built on the site.

If one continued to read the story, however, you had to jump to page A21 where side-by-side with the mosque story was one titled, “Verdict in JFK Bomb Plot”, subtitled “Jury Finds Two Guilty in Conspiracy Charges for Plan to Ignite Fuel Tanks.”

The two men found guilty were Abdul Kadir and Russell Defreitas. A third defendant, Kareem Ibrahim, was ill and didn’t go to trial with them and a fourth, Abdel Nur, took a plea deal and faces up to 15 years in prison. At no time in the body of the article is there any mention that these men are Muslims though that fact was critical to their plot.

It was noted that “the men tried to get help from al Qaeda operative Adnan Shukrijumah who was recently indicted in federal court in a plot to attack the New York City subway system with suicide bombers.”

How many Muslim plots to kill thousands of New Yorkers does it take before the plotters are identified as Muslims?

The reason why there should be no mosque built where the debris and dust of the Twin Towers showered down on the very spot is obvious to any American. It would be an obscenity.

It is obscene to wish to build a mosque within sight of where 2,700 people lost their lives in an act of Islamic terrorism, an act of war, a jihad.

How this simple fact escapes the notice of Mayor Mike Bloomberg defies understanding, but this same Mayor originally thought the failed Times Square bomb could have been placed by “somebody with a political agenda who doesn't like the health care bill or something. It could be anything.”

No, it could not be “anything”! Of the many plots hatched since 9/11, it is likely that 99.9% have been by Muslims, whether native born or immigrants. 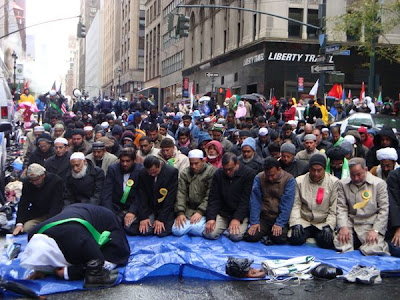 This is not about tolerance. In New York, every Friday in several locations through the city where there are mosques that cannot accommodate all who wish to enter for prayers, the overflow fills the surrounding streets between 2 PM and 4 PM. They block traffic in ways no other group of religionists would ever be permitted. It is surreal.

There is something especially abhorrent about Mayor Bloomberg’s dazzling ignorance because as a Jew he seems to have not absorbed the lessons of history and, in particular, the Holocaust that killed six million Jews and five million Christians; nuns and priests, Lutherans, gypsies, and others swept up by the Nazi death machine.

Hannah Arendt attended the 1961 trial of Adolf Eichmann, the Nazi charged with rounding up and killing Europe’s Jews. Her book, “Eichmann and the Holocaust”, was published in 1963 and enshrined the phrase, “the banality of evil” in our modern lexicon.

For Arendt, Eichmann was a “new type of criminal, who commits his crimes under circumstances that make it well-nigh impossible for him to know or feel that he is doing wrong.” Not so new because the crimes of Islam against all who are not Islamic (and some who are thanks to the Shiite-Sunni schism) are very old and fill the headlines of today’s newspapers.

The Muslims who flew commercial airliners into the Twin Towers and the Pentagon did not think they were doing wrong. They were doing what the Koran and almost every imam with the breath to preach told them to do; they were killing infidels.

This is why a mosque within steps of Ground Zero is so inherently wrong. It says that the intended victims of Islamic domination are simply too blind to envision their fate, too fearful to confront evil, too ready to get on the next train to Auschwitz.

Alan:
I am not a New Yorker, but I feel that the revulsion to this project is justified for all US citizens.

In one sense, though, the very visible presence of this mosque will always emphasize and remind New Yorkers and visitors to Ground Zero, the depravity of the "Religion of Peace". It will become an object of ridicule and a focal point for protestors afer future R.O.P.atrocities. It will be interesting to see how the City and the people will handle overflow crowds of praying Muslims so close to the 9/11 memorial site. I predict it won't be pretty.

This presupposes that unions and contractors will actually build the monstrosity.

I agree with every word you wrote.

So the mosque goes ahead then.

Once again we are confronted with the notion that we must allow everything in the name of freedom to practice this or that here in the United States. For me, there are limits.
Dorothy Rabinowitz tells it like it should be told at http://online.wsj.com/article/SB10001424052748703545604575407160266158170.html
More power to her and to you, Alan, for keeping this treasonous regime in the limelight.

I do hate saying this, and with all due respect to you, Alan, since you obviously aren't one of them, but it seems to me that too many of the Jewish people in the US have a death wish. They would do well to visit the Yad Vashem Holocaust History Museum in Jerusalem, Israel. I have done so, and what is displayed there is overwhelming in scope, factual and most horrendous to behold.

My most excellent Jewish tour guide explained exactly what the meaning of "Never Again" was.

Although I am not a believer in any religion, I have the greatest respect for those Jewish people in the world who hold dear this concept.

As I stated in another response on one of your blogs, Alan, the USA has real enemies, but far too few Americans are willing to accept whom they are.

Dorothy Rabinowitz really nailed it in today's commentary. Since I get the WSJ, I was happy to read it this morning.

Larry, the Iranian ayatollahs, if they keep pushing their luck, are going to learn what "never again" means.