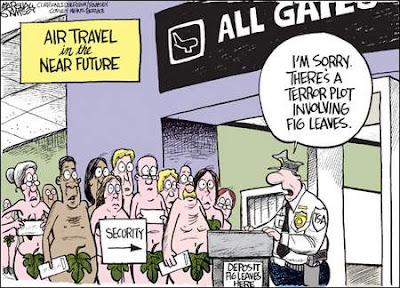 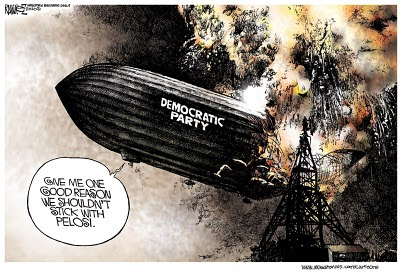 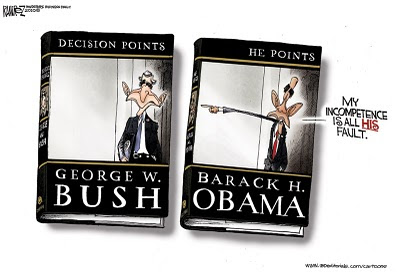 I love Cartoon Round Up - fig leaves, not to far fetched. I vote don't fly!

@Dean: I agree. If people stay off planes until this Nazi regime ends this nonsense, it would send a very loud message.

If the intent is to destroy the American airline industry so it needs a government "bailout" and becomes USGA, "US Government Airlines", they are doing a fine job of it.

@Larry: Destruction of the airlines is one objective, I agree.

However, I think the main goal of the Obama Regime is PROVOCATION in order that we Patriots fire the first shots in the coming civil war.

This 1860 all over again, and we can expect massive violence to break out in 2011 just after the coming economic collapse sends millions of ruined Americans into the streets with pitchforks and torches looking for federal monsters to destroy.

Of course, if this doesn't happen, I request everyone forget I made that statement :-)

@Ronbo:
Yours is just one scenario. I don't sense the level of anger that you do. Most have taken the midterm elections as a sign of change for the better.

@Larry: I am not that sure that a government takeover of the airlines is a viable scenario either.

What we are likely seeing is the government doing what it always does, making stupid decisions in order to appear to be protecting the public. These people are tone deaf to reality and good sense.

I don't sense revolutionary anger on the Right YET - But like I said many time before, if the economy collapses and ruins the middle class, all bets are off - I think hungry and radicalized in the tens of millions will embrace civil war.

Furthermore, our fellow countrymen, the American Left are not happy camper either,as this article in American Thinker indicates.

Personally, as a Vietnam War veteran and a elderly gent of age 62 living on military pension, I pray that you are right and massive violence does not erupt.