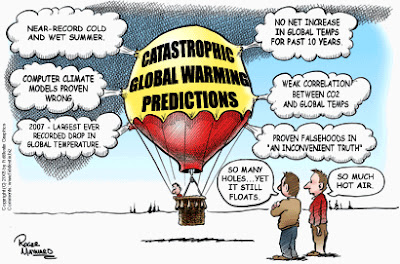 November 20, 2009 is an important date because it was the day that “global warming” ended. It was the day that a total fabrication, a hoax, was revealed to be the work of the United Nations Intergovernmental Panel on Climate Change (IPCC), aided and abetted by a vast network of governmental and business leaders, a compliant media, and scientists who sold their souls for grants and other funding.

It was the day that Al Gore was shown to be unworthy to share a Nobel Peace Prize with the iniquitous IPCC, nor an Oscar for his documentary, “An Inconvenient Truth.”

It was the day that Cap-and-Trade legislation, the largest tax ever on energy use, was eviscerated as lacking any basis in science. The legislation proposed to establish a “carbon credits” trade that would have enriched the Chicago Climate Exchange created by investors that included Goldman Sachs. Following the "global warming" hoax revelations, the Exchange would close its doors within a year.

November 20 was the day that three thousand emails between the meteorologists at the Climate Research Unit at the University of East Anglia, England, specifically its director, Phil Jones, and Penn State’s Michael Mann, as well as others involved in the hoax were made available on the Internet.

The Washington Times reported that “Obama administration climate czar Carol Browner rejected the revelations in the email exchanges, saying “I’m sticking with the 2,500,” referring to the IPCC climate science members. “These people have been studying this issue for a very long time and agree this problem is real.” This, like all the other assertions about “global warming” was a lie.

It must be noted that President Barack Obama continues to talk about “climate change”, the term used to replace “global warming”. His administration has many “global warming” advocates including his science advisor, Dr. John Holden, and Secretary of Energy, Dr. Steven Chu. The Environmental Protection Agency is engaged in securing authority to regulate carbon dioxide and other “greenhouse gas emissions” as this is being written.

The administration’s funding through subsidies and mandates for “renewable energy” sources such as solar and wind energy is entirely based on the assertion that the generation of energy by coal-fired plants, is causing “global warming.” Neither solar, nor wind can even begin to provide sufficient energy for the nation, now or in the future. Support for ethanol, a biofuel, is equally without merit.

The primary assertion behind “global warming” was that it was “anthropogenic”, created by human activity, primarily the burning of “fossil fuels” by utilities to generate electricity and by industrial users. Similarly the use of oil derivatives, gasoline and diesel for transportation is blamed.

A segment of IPCC members did not support the global warming hoax and tried for years to marshall opposition to the Panel’s findings, published in reports shot through with baseless distortions and assertions that the Earth was heating to an extraordinary degree. Over time, they came forth and publicly disputed the IPCC for spreading the "global warming" hoax.

A year earlier in 2008, testifying before a congressional committee, Dr. Roy Spencer, the principal research scientist of the Earth System Science Center at the University of Alabama in Huntsville, said, “Despite decades of persistent uncertainty over how sensitive the climate system is to increasing concentrations of carbon dioxide from the burning of fossil fuels, we now have new satellite evidence which strongly suggests that the climate system is much less sensitive than is claimed by the U.N.’s Intergovernmental Panel on Climate Change.”

“The warming we have experienced in the last 100 years is mostly natural,” said Dr. Spencer, adding that whatever warming had occurred had since been replaced by satellite data documenting that the Earth had “not warmed for at least seven years now.”

A “little ice age” from about 1300 to 1850 was well known to meteorologists and climate scientists.. Dennis T. Avery, the director of the Center for Global Food Issues at the Hudson Institute, noted in April 2008 that “The Earth’s warming since 1850 totals about 0.7 degrees C. Most of this occurred before 1940.” The global warming hoax went into high gear in the late 1980s when no significant warming was occurring. Avery, too, noted that “The Earth has experienced no discernible temperature increase since 1998, nearly nine years ago.”

Following the leaked emails, on November 26, 2009, an editorial in The Wall Street Journal concluded that “the impression left by the correspondence among Messrs. Mann and Jones and others is that the climate-tracking game has been rigged from the start.”

By then, however, the lies put forth by the IPCC had been debunked by a series of international conferences on climate change sponsored by The Heartland Institute. Participants represented many internationally respected climate scientists.

How profitable was it for those involved? Al Gore and others are alleged to have made millions from the now defunct Chicago-based Climate Change Exchange. The emails revealed that CRU director Phil Jones had, since 1990, collected a staggering 13.7 million British pounds (about #22.6 million US) in grants.

In the United States, an estimated $50 to $60 billion in government grants for climate research had been squandered since the late 1980s when James E. Hansen, a NASA employee, Director of the Goddard Institute for Space Studies (GISS), testified before a congressional committee claiming that a massive heating of the Earth was occurring.

Drs. Mann and Jones have both been exonerated by the universities for their work, but there has been a seismic shift in the scientific community as institutions such as the Royal Society in England have begun to back off from their support of the “global warming” hoax.

The “global warming” hoax was supported vociferously by the mainstream media in the U.S. and around the world. The worst offenders have been The New York Times, Newsweek and Time magazines, but there are others too numerous to list, including leading scientific publications.

On November 20, 2009, the world began to awake from a totally fictitious nightmare called “global warming.” It persists among those desperate to keep the truth from reaching a world that has been duped by the largest collection of governmental leaders, politicians, scientists, and media collaborators ever to engage in such a Big Lie.

Its too early to start celebrating a victory over the 'true scientists'. Remember that anybody that questions AGW is branded as an ignoramus and 'anti-Science'. Yes, Science with a capital S is the new religion.

Kindly check the web to see how your EPA is moving by stealth to get the objectives of the 'Warmists' enacted. Latest move by the EPA is for seaboarding states like New York to report on 'ocean acidification'.

Also remember the victory in California!

Until you have a number of black-outs, snow piling up in the streets, and the voting public turning enmasse on the politcians, the AGW mob, will continue to try and fleece the public.

"Victory" in California? Success at committing economic suicide, more like it.

Snow in the streets? More likely men, women and children dying in the streets from famine, which does tend to get ordinary folks riled up. Not being able to afford energy to heat living areas will most probably be noticed.

A cold spell has arrived, and possibly the planet is in the beginning throes of an ice age.

The ending of the Roman Warm Period was what caused the mighty Roman Empire to fall.

Ozymandias by Percey Shelley would be a good read for the folks at EPA as of now:

“My name is (Ozymandias) EPA, king of kings:
Look upon my works, ye Mighty, and despair!”

Nothing beside remains. Round the decay
Of that colossal wreck, boundless and bare
The lone and level sands stretch far away.

Dear Alan: I’ve been writing and blogging on this since the day Al Gore first started the con. There has never been any “science” behind this fraud. Dubious markers, ice core samples, tree rings, the repudiation by James Watts that earth measurement of temp. was totally bogus, not just the fact that where the monitoring was set up initially, population creep, black top, air conditioning units, the biggest hoax was the failure to report the cold temperatures in Siberia when when the Soviet Union fell apart.

I’m a scuba diving instructor. The bozos picked the wrong gas. Nitrogen, is 79% O2 20% and CO2 and other trace gases comprise the other 1%. Nitrogen, about .0054%….They should have gone with Nitrogen and taxed fertilizer. They just couldn’t find a way to tax water vapor from oceans, lakes, streams and clouds make up the CO2. It’s laughable, Algore won’t debate, won’t allow reporters in the room when he speaks and will answer no questions. Ah yes, the consensus has been reached the science is settled. LOL the only consensus is mine and that is Algore probably has an undiagnosed brain tumor. Great article, I’ll dig up some of the stuff I researched a while ago that iced it then and forward it to you if you are interested. J.C.

@Jimmy: Thanks for your offer, but I have been researching and writing about the global warming hoax for well over two decades. Had the media not hyped GW all that time, it would have been dismissed long ago.