It's Muslim Terrorists, Stupid, Not Americans! 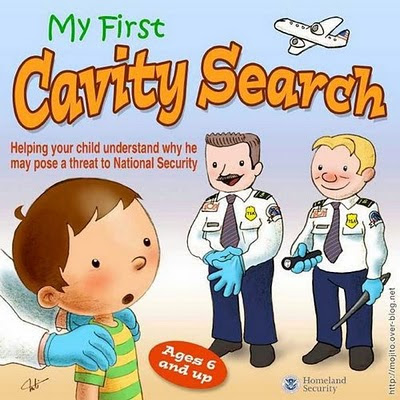 When was the last time an American terrorist got on a commercial airliner and attempted to blow it up mid-flight?

The answer is never.

The 19 hijackers of the 9/11 airplanes were all foreign-born Arab Muslims. They passed through airport screening despite having box cutters on their persons. My suspenders have set off that machine. Now you can’t even carry on nail clippers. Who has ever attempted to seize an airplane with nail clippers?

The infamous “shoebomber”, Richard Reid, was a British citizen, the son of a career criminal who followed in his father’s footsteps. After his release from prison in 1996, the year in which Osama bin Laden announced a holy war against America, he joined the Brixton Mosque, later attending the Finsbury Park Mosque. From 1999 through 2000 he was in Pakistan and trained at a terrorist camp in Afghanistan according to informants.

After being turned away from boarding a Paris to Miami flight on December 21, 2001, the French National Police allowed Reid to be re-issued a ticket for a flight the next day. On December 22, 2001, he boarded American Airlines Flight 63 to Miami wearing shoes packed with plastic explosives. The bomb malfunctioned and it took several passengers to subdue him.

On Christmas Day 2009, Umar Farouk Abdulmutallab, the son of a wealthy Nigerian banker, boarded Northwest Airlines Flight 253 in Amsterdam on route to Detroit. He had purchased his ticket with cash in Ghana. His bomb, sown into his underwear, also malfunctioned. It contained plastic explosive, the same used by Richard Reid. After being taken into custody, he admitted to having obtained the device in Yemen. Earlier, his father had gone to the American embassy to warn against his son’s affiliation with al Qaeda.

The underwear bomber was a classic case of information being available and entered into the U.S. intelligence data base, but not coordinated effectively enough to have been acted upon. Suffice it to say, the U.S. receives and must evaluate vast quantities of such data. Despite Abdulmutallab’s lack of a passport, he was still passed through.

Ever since Reid’s attempt, Americans seeking to board a flight originating here have had to take off their shoes. One shoebomber from abroad versus hundreds of thousands of Americans inconvenienced ever since.

The confluence of having spent time in Afghanistan, Pakistan, or Yemen should be enough to deny most people access to a commercial flight for any reason. Issuing such people visas to enter the United States for any reason should be a far more vigorous process.

On the grounds that the lives of those on flights are at risk, a far greater risk exists for all Americans because the Fourth Amendment says, “The right of the people to be secure in their persons, houses, papers, and effects, against unreasonable search and seizures, shall not be violated…”

There have been no arrests of any American getting on a flight in the United States to commit an act of terrorism.

There is little reason to believe that most of the things that the Transportation Security Administration is doing is of much use. The late Senator Ted Kennedy was repeatedly detained because his name was on a no-fly list. The singer, Diana Ross, slapped an agent whose groping was offensive. And every day we hear of people who fit no terrorist profile encountering absurd and often humiliating searches.

Now the Council on American-Islamic Relations, CAIR, wants special procedures for screening Muslim women so they can avoid pat-downs and reportedly Homeland Security is considering letting them pat themselves down!

At $30 million each the machines that technologically strip everyone naked are in direct conflict with the Fourth Amendment as are the idiotic body searches. Both represent an authority the government has asserted for itself and both are a threat to a constitutional freedom guaranteed every American.

Two isolated cases, eight years apart, are slim justification for imposing measures negated both times by the fact that the flights were boarded in other nations and, fortunately, both bombs failed.

The worst terrorist incident in the United States since 9/11 was committed by an Arab-American Muslim, a U.S. Army Major, Nidal Hasan, at Fort Hood on November 5, 2009. Despite donning Arab garb when off-duty and expressing opinions that troubled his fellow officers, nothing was done to flag Hasan before he walked into an infirmary and killed thirteen soldiers and wounded others while yelling “Allahu Akbar.”

The Transportation Security Administration has become yet another federal agency with too many people doing too many things of no value to its mission and to the great annoyance of the people they are supposed to be protecting.

"The Transportation Security Administration has become yet another federal agency with two many people doing too many things of no value to its mission and to the great annoyance of the people they are supposed to be protecting...."

And they wonder why we are screaming bloody murder about limiting the size and scope of government? With every new department, and with every expansion of an existing department, the cost to the taxpayer goes up, the quality goes down, and the bureaucratic red tape lengthens.

Sadly, asking the government to decrease it's own size is like asking a heroin addict to use less dope....it's just not going to happen voluntarily.

There's no way our sprawling government is going to shrink itself. We are going to have to intervene and FORCE the issue. Like any other withdrawal, it's going to be an ugly battle, but the longer we wait to do it, the bigger fight we're going to get, and the fewer resources we'll have to fight with.

I hope the American people understand the challenge we face will muster the strength and make the commitment to take action soon, but I must say I'm not very optimistic. The government has managed to addict over 50% of the American public to their frivolous spending, and those of us who want to intervene are VASTLY outnumbered.

You nailed it again Alan. I gave this article the top spot on my daily picks.

It's unbelievable that the TSA continues to single out senior citizens, nuns, children, and the ordinary working class while those in Muslim garb are passed on through. They continue to hassle our citizens while appeasing those who want to harm us.

Well said Alan!!!!! I worry about the day I will be TSA'd when I try to get it in my OWN airplane. Thankfully the AOPA(aircraft owners & pilots assoc.) is very active in protecting our rights..... Great job Mr. Caruba!!

@Jeff: Thank you and you're welcome!

Once again Alan, you're spot on. I only wish more tuned into your blog, especially those on Capitol Hill.

Just let your friends know about the blog and it will speak for itself.

Let's face it, one thing we could start to do is PROFILE! The Israelis recommend it and I have been through it there four times. I am still OK, mentally ;-)
Oh, oh, sez some. That would make us feel uncomfortable. It might traumatize me. I could feel less good about myself.
How many here survived such stuff in Middle School, the military, at the workplace?
Get over it! It's not hard to tell who might be the most likely to do harm to us. Shake 'em down.

Not all Muslims are Terrorists but all Terrorists have been Muslims what pray is wrong with making all Muslims fly on Muslim only Aircraft that way they will only kill fellow Muslims and they do that anyway.That would mean they dont have to mix with nasty non Muslims!

@ajdshootist - That would be great if they didn't want to use the aircraft as giant fuel/air bombs and fly them into the Pentagon and White House. You don't think all this scanning for knives and box cutters is to protect OUR safety do you?