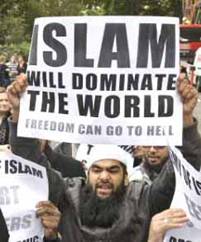 On November 5, a memorial to the twelve soldiers and one civilian killed by U.S. Army Major Nidal Hasan was unveiled at Fort Hood, Texas, one year to the day when they were murdered while Hasan in full combat uniform shouted ‘Allahu Akbar!”, Arabic for “God is great!”

Hasan, an Army psychiatrist and American-born Muslim, has been charged with 13 counts of premeditated murder and 32 counts of attempted premeditated murder. An Article 32 hearing is scheduled to determine if there is enough evidence to send him to trial. The wheels of justice grind exceedingly slow.

The latest assault on humanity and civilization by Islamofascists is the news that al Qaeda’s Yemen branch is taking credit for having blown up a UPS air cargo plane a while back and that packages containing bombs were thankfully intercepted before they killed people on commercial airlines.

In the week of November 1 through 5, eleven children were among 67 worshippers at a mosque in Pakistan by a suicide bomber yelling—guess what?—“Allahu Akbar!” The same day in Afghanistan, nine people at a bazaar were blown to bits by a teenage suicide bomber; seven worshippers in Peshawar, Pakistan were killed when terrorists threw grenades into a mosque; a young boy was killed by rockets fired into Khyber, Pakistan; two people were killed in Yemen by al Qaeda bombers; and two civilians were killed by a Taliban attack in Helmand, Afghanistan. (Source: http://www.thereligionofpeace.com/)

Ever since September 11, 2001, Americans have had a heightened sense of fear regarding Muslims, but it would appear that it is Muslims who have even more reason to fear other Muslims than Americans. This is not to say that some aren’t planning to kill Americans as this is being written.

The worst of this is President Obama’s continual efforts to whitewash a threat to the West and civilization in general as he has done again on his trip to India when he claimed that Islam is “distorted” by a few extremists. The problem, of course, is that there are more than a billion people worldwide who regard themselves as Muslims and the vast majority of whom who have remained conspicuously silent about Islamic terrorism.

What I don’t understand is the charge of “Islamaphobia” that is dragged out by various spokespersons for the Muslim community in America as if it is some sort of deranged response to the fact that Americans and everyone else in the world are at risk from those who get their kicks yelling “Allahu Akbar!” before killing either fellow Muslims or infidels, i.e. unbelievers, who do not want to embrace the religion of peace.

I would argue that Islamaphobia is just Islam-awareness that, at the street level, means keeping an eye out for suspicious behavior, cars parked in Times Square with smoke coming from their trunk, packages or backpacks left unattended in subways, and all the other nasty greetings from Allah’s most dedicated believers.

I’d like to say at this point that I have complete confidence in the Department of Homeland Security and other agencies charged with keeping us from being blown to hell, but I do not.

This is based largely on the glassy-eyed comments of Secretary Janet Napolitano who probably needs help selecting something from a menu or reminders what day it is. She is the very definition of clueless and this is why, I suspect, she was selected for the post by Barack Hussein Obama.

How Islamaphobic can Americans be when they elected the son of a Muslim father, a man who spent his boyhood in Indonesia with a Muslim step-father, and who just came within a hair’s breath of endorsing the building a mosque near Ground Zero after having been seen bowing to the kind of Saudi Arabia?

The greatest tribune I can pay Americans is that they have not gone on a rampage dragging native-born Muslims from their beds and slaughtering them. We are so attendant to their feelings that some judges want to incorporate Sharia law into their decisions concerning homicidal behavior, schools are now adding Islamic holy days to their calendars, and various other efforts to avoid hurting their feelings are widely found.

I do not care if Muslim’s feelings are hurt. I am still angry about having the Twin Towers destroyed and the Pentagon attacked with the loss of just over 3,000 American lives. I am increasingly unhappy about the billions being spent in Afghanistan, Iraq and Pakistan, along with the cost of the lives of our military personnel. I have pretty much concluded that we have wasted too much blood and treasure in these places where Islam resists precepts of democracy, tolerance, and moral, moderate behavior.

The Americans for whom I have real sympathy are Arab-Americans and here’s why. Two thirds (63%) of Arab-Americans derive from Christian minorities in the Middle East. These are people whose families have suffered at the hands of extremist groups in their former home countries. More than half of all Arab-Americans are Maronite Christians from Lebanon who fled Syrian Baathists, Palestinian terrorists, and the Shiite Hezbollah.

So do not talk to me about Islamaphobia. A phobia is an irrational fear of something. It is just common sense to fear members of a so-called religion more devoted to death than life; a religion that authorizes, sanctions, and demands that unbelievers be killed in the name of Allah.

I can summarize Islam in one sentence as, "A totalitarian system founded by a psychopath and designed to conquer the world."

Read the 164 Jihad verses in the KORAN.

After reading the Jihad verses, it should be clear to any rational person that Islam presents a great danger to the West and America.

In 1957, our Supreme Court made a decision that teaching or preaching the violent overthrow of our government was protected speech.

Teaching or preaching is one thing. There should be a federal law prohibiting those who would overthrow our government from inciting others to break our laws and commit mayhem in their cause of Islamic world domination.

My opinion since 9/11 has been that all Muslims should be removed from the American Homeland as high level national security risks based on the totalitarian and terror based nature of their religion.

Like the character of Dr. Stockmann in "The Enemy of the People" by Ibsen, I am destined always to be way out in front of public opinion, but at the end of the day and after endless Muslim terrorists attacks of death and destruction on innocent Americans, the public opinion will catch up with me.

i disagree that allahu akbar means GOD is great

it means that allah is great
( in their opinion )

@ Elmer. Want to split a few more hairs? Allah is god as far as Muslims are concerned.