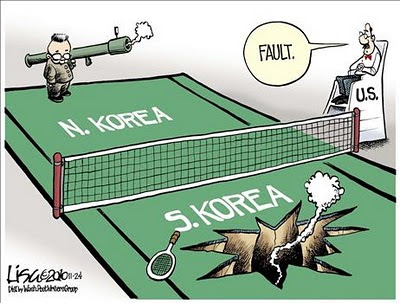 The Korean War ended in a stalemate in 1953. Having begun on June 25, 1950 with the blessings of Joseph Stalin, an armistice agreement on July 27, 1953 left the peninsula divided between the Republic of South Korea and the Peoples Republic of North Korea. How long ago was that? Dwight D. Eisenhower was elected largely on the promise to go there and secure an end to the conflict

By the time it was over the Red Chinese had intervened and American casualties were around 54,000 with 103,000 wounded. The North Koreans and Chinese were estimated to have lost ten times that number. The war was immensely unpopular with an American public that was still recovering from World War Two that had ended in 1945.

To his credit, President Truman did not hesitate to commit troops. Within two days after the invasion, Americans were fighting another war in Asia. The United Nations provided cover and the conflict was officially a UN action.

It was a proxy war, part of the long Cold War that had begun at the end of World War Two. The Chinese got involved when Gen. Douglas McArthur’s strategies put U.S. troops close to their border. He wanted to finish off not just the North Koreans, but the fledgling communist Chinese government as well. Truman relieved him of command after he neglected the fact that U.S. armies fight under civilian control in the form of an elected Commander-in-Chief and authorization from Congress.

In time, China for reasons of proximity and other factors became the power that controlled North Korea. Under Kim ill-Sung, known as the “Great Leader”, a Soviet protégée of Stalin’s, and his son Kim Jong-il, the “Dear Leader”, North Korea has evolved into the classic rogue nation. It was named one of George W. Bush’s “axis of evil.”

China provides life support for North Korea, the supplier of food and energy. In his 2004 book, “Rogue State: How a Nuclear North Korea Threatens America”, William C. Triplett II, noted that “communist China is central to all North Korean issues, from human rights to weapons proliferation.”

Whatever North Korea does is sanctioned by China. This fact has been largely shielded by U.S. policy from the American public. North Korea is known in diplomatic circles as “China’s hidden dagger.” The phrase is taken from an ancient Chinese military text called “36 Srategems.” It means the covert use of another country to annihilate your enemy. North Korea threatens South Korea and Japan, and by extension the U.S. which is committed to come to its defense.

American administrations have negotiated with North Korea and each has learned that they will not adhere to any agreement, using negotiations to secure bribes of all kinds, including one in which the U.S. agreed to build two nuclear facilities there! Recent news revealed they have increased their ability to produce nuclear weapons to the utter astonishment of U.S. intelligence agencies.

Its nuclear program was begun by Moscow and Beijing converted it to a weapons program. Triplett said that Beijing uses North Korea as a proxy distributor of weapons of mass destruction and ballistic missiles to terrorist nations that include Iran and Syria. They in turn, provide weapons to their proxies, Hezbollah and Hamas.

Like Iran, no sanctions and no threats of military reprisal have ever had any serious affect on North Korea.

Writing during the George W. Bush administration, Triplett said “There is no endgame strategy. North Korean aggression and provocations still go unpunished.” Together, the North Koreans and China “have successfully bogged any progress in endless diplomatic meetings and conferences while North Korea’s nuclear research marches on.”

America is in no position to fight another war on the Korean peninsula and is dependent on China (and Japan) to purchase its securities to keep its economy functioning in the wake of the 2008 economic crisis. America’s manufacturing base has largely been undermined by the transfer of many of our industries to China.

Americans have largely forgotten the threat of communism.

The latest North Korean attacks are China’s way of reminding the U.S. of its dilemma and dependence.

The failure to secure a victory over North Korea in the 1950s, too much dithering since then, and too much distraction fighting recent wars in Afghanistan and Iraq have combined to render America a paper tiger who, despite our vast military power, will not or cannot pull the trigger.

So if China uses North Korea as a proxy against us, why the hell isn't there a concerted effort to not buy an Chinese made goods? If they are our enemy, treat them like one or stop with the hysterics about North Korea.

How would you deal with a nation that has over a billion population? The desire to sell stuff to the Chinese and to keep them borrowing our securities far outweighs a trade war.

I was almost 16, two days out of Yokohama on a passenger-freighter when the war started. Almost exactly four years later I was in South Korea on occupation duty.

I have no difficulty in remembering.

The Chinese are like the Soviets--and many others of that ilk: "What's mine is mine; what's yours is negotiable."

Since most foreign-policy wonks believe that regardless of possible consequence, talking is better than shooting, we've been negotiating away our powers and sovereignty for many decades. Oh, and our wealth, as well.

But that's okay. As long as the pols can buy re-election and keep the public watching football, Nascar, Oprah and Dancing with Stars, all's well in the world...

That was technically "The United Nations Police Action in Korea", Alan.

All that you say is correct.

China needs us way more than we need them. If they stop financing our deficit, we will have to live within our means. The crap that we buy from China we can easily make ourselves. Our costs go up a bit but unemployment goes down and the trade balance is much better.

China needs trade to survive and to avoid internal revolution. We have tremendous leverage but don't use it. Throughout history, China has suffered terrible revolutions. The current Chinese government is keenly aware of the need to find jobs for their people to prevent political turmoil.

South Korea should relocate Seoul to much farther away from the border, right now they are sitting ducks.

The USA should use trade to help our allies and punish our enemies.

That is what North Korea says about the latest incident.
http://wp.me/p11mt3-NI

Here is an objective view on North Korea.
http://redkorea.wordpress.com/

@Kostas. Thank you for your contribution to the discussion. The PRNK just lies about everything it does. It needs a real slap-down, but so far no president since Truman has made the effort.

I wrote the following well over a year ago. In the full post, I made the argument that this President showing the weakness that he is now known for would in fact aid and abet this tin horn dictator in N.Korea. Now, the madman is taking his shots as I feared and the Moron in Chief has the utter gall to proclaim this isn't a crisis or something to that effect.

"WE CANNOT NEGOTIATE WITH MADMEN! Chamberlain Jr. has got to get that through his fat head! While we fiddle/faddle, Korea lies to our faces while working at getting what they want! One other thing here. The loonies on the left seem to think the Koreans, being the honorable people that they are ,would never do anything stupid! Wrong!! As is evidenced buy their latest action, the North Koreans are willing to risk destruction well knowing the weak sister leaders of the world will cave in as always. And in the eyes of the morons in power here, they can't deliver a payload! WRONG! They have a short range missile that can deliver a small warhead. And lest anyone forget, we have 35,000 troops around the border there. One bomb. That's all it takes! But we'll trust the Anti-American UN and a madman?! Good Grief!