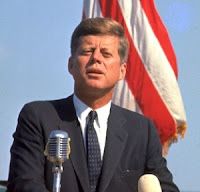 On November 22, 1963 I was in the office of a human rights organization in downtown Miami, Florida, fresh from service in the U.S. Army.

I was happy that President Kennedy and Soviet Premier Nikita Krushchev had not gone to war in October 1962 over Soviet missiles in Cuba. My battalion, part of the Second Infantry Division, had been put on alert to invade. A U.S. naval blockade had stopped any new missiles from being delivered and those that had been were withdrawn.

The Cold War had been going on since 1945 and tensions between the U.S. and Russia had briefly and dangerously reached a tipping point. Fortunately, the leaders of both nations pulled back. Elsewhere a relatively small, backwater conflict was going on in Vietnam, but few were paying it any attention.

John F. Kennedy was incredibly popular. He said that the torch of freedom had passed to a new generation and, at age 26, I was convinced his generation and mine were going to solve all of the world’s problems. I was unaware that JFK had so failed to impress Krushchev when they had met in Vienna in 1961 that the Soviet leader had felt emboldened to put missiles in Castro's Cuba.

On November 22, 1963, in Dallas, Texas, Lee Oswald, a leftist malcontent who had spent some time in Russia, shot and killed the President. Within days I had packed and returned home where I would take up a career in journalism.

Anyone who was alive on that day can probably tell you where they were when they got the news. For later generations, it is just a date in the history books.

After Lyndon Baines Johnson was sworn into office to serve out JFK’s term and won election on his own, history took a turn for the worse when he escalated the Vietnam War. Some 58,000 young men died in that conflict and President Johnson, after a huge election victory in 1964, announced on March 21, 1968 that he would not run for a second full term. He had served from 1963 to 1969.

Johnson had unleashed a tidal wave of liberal programs such as “the Great Society” and “the war on poverty”, signed the Civil Rights Act into law, initiated Public Broadcasting, instituted Medicare and Medicaid, and increased aid to education.

For nearly fifty years, America has been seesawing back and forth between conservatism and liberalism without seeming to learn the lessons of the experience.

Liberalism and its many entitlement programs, the expansion of the federal government, the debasement of our educational system, congressional raids on the Social Security fund, and the failure to rein in the “government sponsored entities”, Fannie Mae and Freddie Mac, have brought us to a point of economic collapse not seen since the Great Depression of the 1930s..

After November 22, 1963 everything that followed began with a single bullet. It sent the nation careening off on a spending spree that by 2008 took an infusion of billions of public dollars to avoid a banking industry catastrophe. It would be followed by an increase of two trillion in the national debt under a new, young, and briefly popular president.

Did we learn anything from those previous decades? Apparently not.

In 2008, the voters elected a virtually unknown U.S. Senator from Illinois who had barely spent a few months in the Senate before setting out to become the 44th president. Like JFK he was young, charismatic, and eloquent so long as Teleprompters fed him the words to say.

President Barack Obama did not bring a “brain trust” into office with him like FDR or “the best and the brightest” as Kennedy did. Instead, he installed a large group of “czars”, men and women, dedicated socialists and loony environmentalists who mostly bypassed the Congressional vetting process, but who have wielded great power behind the scenes.

Obama’s popularity, like Carter’s, disappeared in less than two years. The recent midterm elections were historic. The Republicans will control of the House and Democrats will have a narrow control of the Senate when a new Congress returns in January. Until then, the political chess game is astonishing as the nation races toward deadlines that include extending the Bush tax cuts and the continued funding of the government.

A remarkable movement, the Tea Party, emerged; leaderless, but composed of millions of Americans determined to take back the power that had been taken from them by a Congress indifferent to their wishes. The damage of the first two years of Obama’s term will take time to repair, but it will be repaired.

History might have been very different had it not been for November 22, 1963, but we shall never know how different.

What we do know is that liberalism, socialism, does not work. It debases fiscal prudence, spreads poverty, and subverts the Founder’s intention of a small central government while shackling the States with unfunded mandates.

For an older generation of Americans, we have lived through a lot of history and, 47 years ago, a single bullet set it in motion.

Enjoying these daily commentaries? If so, there's a Donate button that will allow you to provide support to Warning Signs. All donations will go to equipment and IT services to keep the commentaries coming. Thanks!
Posted by Alan Caruba at 9:49 AM

Your chronology of Democrat/Republican swings has a minor error - Regan was so well received by America that his VP won the presidency in 1988, George H. W. Bush. The presidential swing back to Democrats occurred 12 years after Regan was first elected.

It is also important to note that although we swing our government back and forth between Democrats who expand domestic programs and criticize foreign activity of US military. and Republicans who expand military programs and criticize waste in domestic programs; both parties are far more adept at increasing government spending in their pet areas than they are at reducing the waste they campaign against.

The chronological correction has been made. I tend to forget Bush41.

What an excellent brief history lesson. I was a child in the first grade when JFK was shot. I remember someone bursting through the classroom door and telling my teacher who started sobbing. At the time I did not understand but I knew it must have been something serious if it made my teacher cry.

Later I watched as most of the men in our family and town being drafted and going off to war. My preteen and early teen years saw the war protest and the horrible treatment of the boys who did make it home.

I have a scrapbook with the front page of our newspaper that reads "Nixon Steps down, Ford takes office.

I have read a lot of books on JFK and too have wondered how our world would be if he had not been shot.

Yes, there has been a lot of history in 47 years I never had a thought our America would be in the shape she is in today. It has taken a lot of years for me to wake up.

I was a young man newly married and starting to plan our family with my wife back then. As you said about the people of those times I remember exactly where I was and what I was doing. I wish we could bring back the values of those times but I also know that will not happen. Maybe after the current financial situation runs its course the young people of today will gain the experience to realize that those old values are golden and we can get back on the right track again.

Alan, At the time I thought that JFK didn't begin to have the experience. Certainly at first he thought that Khrushchev was a rational person and could be negotiated with in a rational fashion.

We came the closest to nuclear war with the USSR that I am aware of.

I thought that JFK was shaping up as President quite well when he was assassinated. I don't accept in the least that it was Oswald who did it. Trouble was, no one involved in the Warren Commission had the least desire to know who was actually behind the assassination.

JFK was not a liberal. His brother Bobby was.

JFK was a moderate old style liberal; even his brother Robert was someone conservative by today's standards. Both men were American nationalists and strongly anti-Communist. It is interesting to note that JFK seems closer to Reagan than any Democratic since Carter.