Attacking Paul Ryan, But Not the National Debt 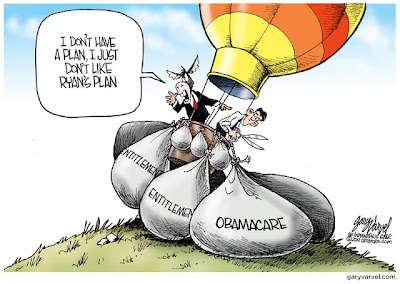 The White House and Democrats have been attacking Rep. Paul Ryan (R-WI), Chairman of the House Budget Committee, for having the audacity to put forth budget plans, something the Democrats in the Senate have failed to pass for well over a thousand days at this point.

The first words out of Rep. Steve Israel’s mouth, a Democrat from New York, were the pathetic blather about “billionaires.” Most Americans aren’t billionaires or even millionaires and are more concerned about the rising costs of gasoline, food, and everything else than whether the rich pay more taxes. In point of fact, the rich pay the vast bulk of the income taxes and some forty percent of workers pay none at all. If you earn more than $250,000 a year, Democrats think you’re rich.

﻿ ﻿ Never mind that most of us are trying to live within our own budget, the Democrats have resisted passing any kind of a budget to address a looming fiscal crisis of their making. That was why voters in 2010 returned control of the House, where all appropriations are authorized, to Republicans. If they had done the same for the Senate, we might actually have had some budgets, but Harry Reid, the Senate Majority Leader, has ensured that every effort to address the fiscal mess fails.

The White House and the Senate, despite the Simpson-Bowles Commission, despite the so-called “super committee”, and despite the plans put forth by Ryan, have utterly failed to do anything but spend, spend, and spend. To do so, they must borrow, borrow, and borrow.

In February, the Congressional Budget Office (CBO) reported that annual spending over the Obama era had climbed to a projected $3.6 trillion this fiscal year from $2.98 trillion in fiscal 2008; more than 20%. It added up to an increase of about $5 trillion in just four years. This year will mark the highest deficit—the difference between government revenues and government spending—since 1946!

Robotically and moronically, the Democrats keep calling for higher taxes and even the CBO has concluded that the 2012 tax hike (ending the Bush tax cuts) on capital gains, dividends, estates and small businesses would impede economic growth, reducing it 1% the next year and raising the specter of unemployment rising from 8.5% to 9.1%--increasing the jobless to 750,000.

As The Wall Street Journal put it, “the CBO’s facts plainly show that Mr. Obama has the worst fiscal record of any President in modern times. No one else is even close.”

In addition to the tired rhetoric about billionaires and millionaires, the Democrats are also lying about Ryan’s plan as it relates to Medicare, claiming it wants to deprive older Americans of its benefits, but as Ryan points out, “Our budget’s Medicare reforms make no changes for those in or near retirement.” Without reform, Medicare will go broke as will Social Security.

Ryan’s plan “spurs economic growth with bold tax reform—eliminating complexity for individuals and families and boosting competitiveness for American job creators. Led by House Ways and Means Committee Chairman Dave Camp, our budget consolidates the current six income tax brackets into just two brackets of 10% and 25%”, the latter for corporations in order to permit them to be more competitive with nations that tax their corporations at a far lower rate than ours”, currently near the highest in the world.

In brief, the Ryan budget would produce savings in federal spending of $5.3 trillion over ten years and reduce the deficit by $3.3 trillion. It proposes a 10% reduction of the federal work force over three years through attrition and it offers reforms to Medicaid, among others to pull the nation back from the brink of catastrophic collapse and default.

You don’t have to be a mathematical genius to know what is wrong with the way Obama and his Democrat trolls are running the government, despite Republican efforts to apply the brakes. They have increased spending to $3.8 trillion despite the fact that the government only takes in about $2.1 in revenue.

Without a Republican in the White House and Republican control of both the House and Senate, the United States of America—you and I—are headed off a cliff. All the lies Obama tells between now and November 6, 2012 will not change that.

It's pretty much a "shoot the messenger" type of behavior. I'll not forget the European bigwig who commented, "We know how to solve the problem, but not how to be re-elected after we do so."

Re-election is of higher priority than solving the problem--which has been allowed to expand to where it likely is not solvable.

I fear that anything done now, if even possible, would be far too little and far too late.

Take away the idiocy of borrow and spend (uselessly), and a worse depression than the Great Depression will be upon us. I doubt that few would be the least prepared for that sort of an ecomonic jolt.

Medicare was a huge mistake as it was devised, and far better would be tax free medical savings accounts, and direct pay patient to the doctors for services. The only insurance that would be needed would be for unusual high coat medical care, which used to be quite reasonable in cost. (My Grandfather was a very good GP physian, and in 1950 he said to me, "Larry, if this prepaid medical "insurance" prevails, ordinary people will not be able to afford medical care." He sure was right.

According to an American Community Survey, by the U.S. Census Bureau, the top 10 poorest cities with populations more than 250,000 are all run by Democrats/liberals. This alone should tell you how brilliant they are at fiscal responsibility! The Demos have a record of destroying successful cities with their liberal welfare dependency agenda. My impression is that the current generation is too hooked on the 'free money' and it will be near impossible to wean them from the entitlement teat. That's why the majority of the lower socio-economic population vote over and over for the Dems - for their free stuff. What's the answer Mr Caruba, because from where I'm sitting it doesn't look like the message is getting through to the people of America. They either don't believe the USA can fail, or they think it's a Republican conspiracy. Hence, the Democrats pander to these groups for their vote. What to do....

At the end of 2010 it was estimated that the cost of federal regulations to the American public would be around 1.75 trillion dollars.

Cut that in half and we could use that money to eliminate the national debt in about 15 years.

Admittedly that isn't going to happen in that manner, but I use that to show that the ability to get this under control and fix the entire apparatus is within the grasp of those who are in responsible positions; if they have the courage to do it.

The inability to fix all of this isn’t the problem. Courage is the problem. I am convinced that they don’t do the necessary homework to answer their detractors. One must develop the intellectual responses to their emotional appeal.