The EPA is a Nation-Killer

To the naïve and uninformed, the Environmental Protection Agency exists to ensure clean air and water in the nation. That was its initial mandate when it was created by an executive order by President Nixon in 1970. It has since become a nation killer. 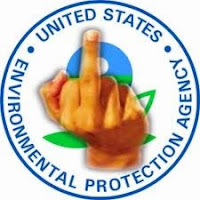 In 2013 a flood of regulations will cost thousands of Americans their jobs and drive more industry overseas to avoid the cost of doing business in America. It will drive up the cost of energy from electricity, along with the cost of gas and diesel fuel. It will effectively kill much of the coal mining industry in a nation that is the Saudi Arabia of coal, an energy source that formerly provided fifty percent of all electricity in America.

The EPA is girding up to kill “fracking”, a technology that has safely been in use for decades and one that holds the promise of further provision of natural gas. The provision of oil is being thwarted as well; mostly famously by Obama’s derailment of the Keystone XL pipeline in a nation laced with energy-providing pipelines. Energy, the lifeblood of the nation, will be under attack as never before.

A new EPA ozone standard will occur, one that the EPA estimates would cost $90 billion a year while other studies put the figure at nearly a trillion dollars and destroy 7.4 million jobs. The EPA’s projections are that 650 additional communities would be deemed “non-compliant” and effectively ensure plant closings and that no new manufacturing and other businesses would set up shop.

The EPA has pushed to regulate—control—every body of water in America, no matter how small.  A recent court decision derailed EPA storm-water regulations that would have established a first-time standard for post-construction storm-water runoff could include mandates on cities to change existing buildings, storm-water sewer systems, and streets. It would have been the most expensive rule in EPA history.

The EPA will release regulations on the manufacture of cement—the MACT rule—that would increase the cost of manufacturing this essential element of construction by 22% to 36%. Many such plants would have to close and the U.S. would have to import cement from nations like China.

Expect regulations on cooling towers to protect fish under the Clean Water Act. A proposed coal ash rule could cost between $79 to $110 billion over the next twenty years, ending between 183,900 and 316,000 jobs over 20 years, affecting states that include Pennsylvania, West Virginia, Ohio and Missouri. The EPA has been regulating “farm dust” for decades and new rules would affect the nation’s food supplies as farmers and ranchers adjust by raising fewer livestock and the till fewer fields. Spill prevention rules would further impact farmers and ranchers.

If you were asked what is the most costly federal agency which would you suggest? Would it be the Department of Homeland Security? Department of Defense? Labor? Agriculture? Housing and Urban Development? Transportation?

In terms of the regulations it generates, the Environmental Protection Agency is the most expensive rulemaking agency. It costs $353 billion annually to comply with its regulations.

The Competitive Enterprise Institute recently published a report by Ryan Young, a Fellow in Regulatory Studies, regarding the EPA and it is further testimony to the way this predatory agency has gone from the first year of its operation in 1971, costing $701 million, to outlays in 2011 of $10.722 billion, employing 20,610 full-time workers.

The public is expected to believe that this army of environmental bureaucrats are all diligently saving Americans from particulates in the air, rain run-offs in the water, any pesticide that might actually protect them from pests, and the countless other life-threatening dangers that required, from 1999 to 2011, a total of 4,995 rules in the “Unified Agenda of Federal Regulatory and Deregulatory Actions.”

These regulations have little to do with clean air and water and everything to do with destroying the nation’s economy, putting thousands out of work at a time when economic growth is barely occurring, and new taxes will further reduce the spending and investment power of Americans.

After having put in motion the flood of regulations that will strangle the economy, EPA administrator, Lisa Jackson, will step down after Obama’s inauguration. Her decision came after a law suit by the Competitive Enterprise Institute’s Chris Horner will make known the thousands of emails Jackson sent under an alias, a practice forbidden to federal employees, presumably shedding light on policies and views she intended to be kept secret.

Reacting to the news of her forthcoming resignation, S.T. Kornick, Director of Research for The Heartland Institute, said, “Jackson played the environmental ‘bad cop’ to President Obama’s ‘good cop’, but the result of their tag-team effort has been a huge expansion of the EPA’s power. Appointing another bad cop to head the EPA could by itself push the nation into recession.”

The most powerful economy in the world is being destroyed from within by an agency that has declared war on America. It must be downsized and restrained if the nation is to survive.

The US Government is destroying this country on all fronts. We are now seeing the end of this once great country. Please, America, wake up and prove me wrong!

I see little, if anything, to look forward to from the EPA, or the entire Federal government for that matter, it's a downhill ride on a runaway train, buckle up, it's gonna be a bit bumpy...

The trouble with our country is, our children have been indoctrinated to the extent they know nothing that resembles science. They're all enthralled with their "smart" phones and if any of the facts such as you have discussed are mentioned, their eyes glaze over. In truth, all of the EPA's restrictions didn't come from Congress, but from ignorami who pursue goals such as "social justice", which is neither social, nor just. The right thinking half of the country must grow a pair, and soon.

Lord Monckton once said Greenpeace was founded by, among others, a personal friend. The idea was excellent! The Watermelons sniffed opportunity, entered and took it over as their own. Monckton's friend was rapidly shown the door.
Plainly this too has been the action model followed in the commandeering of the EPA. The idea was excellent at concept but one which has been grotesquely malformed. How this has been achieved has been by following ways which to right-minded people, just a few years back, would have been beyond the wildest of ugly imagination.

I believe all this federal interference is purposefully designed by our president to destroy this country from the inside.

Everything I read about his past is obfuscated so no one can learn the real truth him. He can't even keep his story straight when he speechifies during a eulogy.

There is much evidence to point to collusion and fraud about his background, but our elected leaders are too afraid to pursue the truth for fear of being called racist.

Not until each and every person in this country is destitute will people finally wake up and demand the truth, but by then it will be too late.

God help us all.

I am speecless mr Caruba, but still, its the direction he is taking your great country to. The Muslims, arch enemies of America, relegated down his priority list. All we can do is pray and pray and pray. That the environment is now the new enemy is news. And again, thanks for your site's insights.

I friend of mine is Dr. Jay Lehr. Jay was one of the original scientists that helped form the EPA and helped write their first five foundational pieces of legislature. He now travels and speaks all over the country telling his listeners that he's now "doing penance for that". Jay says that a full 80% of what EPA is doing isn't what it was supposed to do and their functions should be turned over the state EPA's. I have sat with some of them at meetings here in Ohio and, at least in Ohio, they are a whole different breed than those at the federal level.