Would States Secede to Protect Their Citizens? 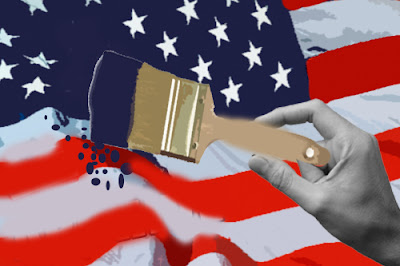 Many, if not most, Americans are unaware that the nation is composed of separate republics with their own constitutions. They are, of course, the individual states.

“The powers not delegated to the United States by the Constitution, nor prohibited by it to the states, are reserved respectively, or to the people.” – Tenth Amendment

By tying compliance with federal laws and regulation to receiving funds, the states have been coerced to accept programs that limit freedoms enumerated in the Constitution and the passage of Obamacare is but one example. Some twenty states have refused to set up the mandated insurance exchanges. Obamacare grants the government complete control over the provision of medical care that every American has formerly received from the free market health system that it destroyed. It gives the federal government control over our lives in terms of who lives or dies.

As noted on the website of the Tenth Amendment Center: "The Founding Fathers has good reason to pen the Tenth Amendment."
“The issue of power – and especially the great potential for a power struggle between the federal and the state governments – was extremely important to the America’s founders. They deeply distrusted government power, and their goal was to prevent the growth of the type of government that the British has exercised over the colonies.”

“Adoption of the Constitution of 1787 was opposed by a number of well-known patriots including Patrick Henry, Samuel Adams, Thomas Jefferson, and others. They passionately argued that the Constitution would eventually lead to a strong, centralized state power which would destroy the individual liberty of the People. Many in this movement were given the poorly-named tag ‘Anti-Federalists.’”

“The Tenth Amendment was added to the Constitution of 1787 largely because of the intellectual influence and personal persistence of the Anti-Federalists and their allies.”
Their worst fears are coming true as the nation heads into 2013. In just four years, the Obama administration, through its profligate borrowing and spending, has brought the nation to the brink of financial collapse and, as we have seen, the refusal of the President to negotiate anything than the current Band-Aid to avoid the “fiscal cliff” for another two months, has brought the nation to a point where the collapse of the U.S. dollar is not just imminent, but likely.

When that occurs the individual states may elect to secede in order to avoid having the federal government nationalize their National Guard units or take control of their state police to enforce whatever measures it might take to control the population. Individual state law enforcement authorities in cities and towns would need similar protection. Reportedly, massive amounts of funding have been directed to them to ensure their cooperation.

It would be a means to protect their citizens insofar as state constitutions grant the same rights as found in the Constitution’s Bill of Rights. It would not surprise me to see Texas lead the way. Others would follow.

You know things are bad when historians like Arthur Herman, writing on the January 3 Fox News, says that “Washington’s Republicans and Democrats alike have become the toll collectors on the road to serfdom.” Citing recent riots in Argentina, Herman said that “Argentina reveals who really suffers when those who create a nation’s wealth get mugged by those who spend it—as just happened this week in Washington.”

If the private sector manages to rally this year, it may buy some time before the midterm elections in 2014. A letter to the editor in the Minneapolis Star-Tribune summed up the problem neatly. “Let's look at what we have learned from this election: Twenty-one of 22 incumbent senators were re-elected, and 353 of 373 incumbent members of the House were re-elected. The American people have re-elected 94 percent of the incumbents who were running for re-election to an institution that has an approval rating of about 9 percent. This indicates, as an electorate, we are a nation of idiots. We're now stuck with the useless, dysfunctional government that we deserve.”

The U.S. Constitution was written in the wake of the failure of the Articles of Confederation, the first attempt to unite the states for the common good of the growing nation. It is the product of some of the finest minds, the most dedicated advocates of liberty, to gather in one place at one time. It is the oldest, living Constitution in the world. It was adopted on September 17, 1787 and ratified in June of 1788.

On December 17, 1791, the first ten amendments—the Bill of Rights—were ratified. It is a list of immunities from interference by the federal government and the fears of the Founders are now being borne out by a government that is too large, borrows and spends too much money, and has departments such as the Homeland Security that threaten the rights of free speech, travel, and other freedoms. Every U.S. citizen is now subject to government surveillance more typical of a totalitarian government than one that respects and protects their personal security and rights.

This is why the United States could find itself in a rebellion that will rival the causes of the Civil War, itself a state’s rights conflict in addition to the issue of slavery that had hung over the Constitution since its ratification; an effort to “kick the can down the road” the Founders agreed to in order to get it ratified.

It is not beyond the imagination that a deliberately created crisis would prompt individual states to withdraw from the Union to protect themselves and their citizens, otherwise known as “the people.”

Thanks Allan ... maybe this is pertinent? http://dixienet.org/rights/2012/economic_power_of_south.php

Thank you, Ken. Having lived several years in the South, I understand why our present conflict is seen as a North-South issue, but it is a coast to coast issue with the coastal states dominating the discussion. And, yes, the nation is broke and no one wants to talk about that either.

We have entered an historical period with many ominous parallels to 1850s, and even the two major political parties are in opposition again, with the vast majority of Republicans supporting freedom, while the Democrat Party, once again, stands for slavery (socialism) by a majority vote.

So yes, the next act in this historical drama could be the nullification by states of federal laws like Obamacare, and when the Obama Regime lowers the inevitable boom and begins knocking rebel heads, upwards of 25 states in the south and west may leave the Union to form a New Confederacy, full well knowing the federal government will attack them like the Allies did in Normandy on D-Day.

The Second U.S. Civil War has become thinkable...and to be feared for reasons or massive destruction that could include the use of nuclear and/or chemical weapons of mass destruction by the Obama Regime.

The problem is that elite branch of the Democrat Party is dominated by an individual who is not rational and believes that Communism can only be imposed by a violent revolution.

However, American patriots may decide smoking ruins of major cities and the destruction of their homes, farms and factories are better than the chains of Communist slavery.

Prior to the U.S. Civil War, the South was the most wealthy section of America.

You got it dead on by stating we are a nation of idiots. Moronism seems to be getting worse each passing day.