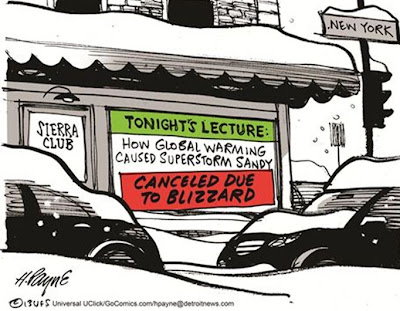 
The New Jersey chapter of the Sierra Club emailed to invite me to attend a “conversation on climate change in a post-Sandy New Jersey” intended to focus on the “impacts of fossil fuel pollution” later this month. “We need to take action to address and prevent the future impacts of climate change. Hurricane Sandy was the latest storm in an increasing trend of more extreme and severe weather.”


There isn’t “an increasing trend of more extreme weather” unless you include the current cooling cycle that has been in effect for the last 17 years, causing longer, more intense winters around the world. I doubt that the Greens can do anything about the Sun which has been in a natural cycle of reduced radiation.

As far as the Sierra Club and comparable multi-million dollar environmental organizations are concerned, when they say that want to “prevent future impacts of climate change” they are either delusional, thinking that anything can be done to prevent hurricanes, blizzards, and other aspects of the weather or they are talking about imposing a carbon tax on the emissions of carbon dioxide and other so-called greenhouse gases. Congress has already rejected that.


And it’s not just the Sierra Club. The same day their invitation arrived, Friends of the Earth emailed to say “The Pacific Northwest is currently engulfed in a struggle over the dirty future of coal and coal exports in the U.S. If the biggest coal companies in the world have their way, we could have 140 million tons of coal barreling through Montana, Idaho, Washington and Oregon each year. That’s up to 60 trains per day in some of our neighborhoods and more than 1,000 ships a year through our sensitive waterways!” Can you say fear-mongering? Lies about coal? And a total ignorance of the value to the economy of its use and export?


The Greens regard anything that would provide energy for any reason to anyone as the enemy.


That is why “a panel of experts will discuss fossil fuel projects in our state, their impacts, and ways to reduce that pollution.” Fuel is not pollution. Fuel is what we use to heat or cool our homes, drive our vehicles, provide electricity, and conduct the business of the nation. The air and water in New Jersey is so clean we actually invite people to live here, start businesses here, and to visit as tourists to enjoy it.


Since carbon dioxide is vital to the growth of all vegetation, from your flower garden to the abundance of crops that feed us and all livestock, reducing it is a very bad idea.


Need it be said that the local chapter is also gearing up to oppose a new natural gas pipeline for the state? Think jobs. Think lower energy costs. Now extrapolate that to the Keystone XL pipeline and to other expanded sources of energy and the benefit to the nation’s economy.


The old guard of the environmental movement is passing from the scene and the entire edifice of the global warming hoax is crumbling. Jim Hansen, the head of NASA’s Goddard Institute of Space Studies (GISS) since 1981 has announced his retirement. It was Hansen who told a congressional committee in 1988 that the Earth was heating up. That was the same year that the Intergovernmental Panel on Climate Change (IPCC) was established by two United Nations organizations, the World Meteorological Organization and the United Nation Environmental Program.


Larry Bell, a columnist for Forbes magazine, recently urged the U.S. to cease funding the IPCC along with the UN Framework Convention on Climate Change. “While the amount we give to the UNFCC and IPCC may seem like a tiny pittance in the realm of government spending largess, it’s important to realize that (the) true costs of that folly amount to countless billions in disastrous policy and regulatory impact.” Together they have received a total average of $10.25 million annually, set to increase in the FY 13 budget request to $13 million. They are a total waste of money, representing the greatest hoax of the modern era and the redistribution of our wealth.


Environmental organizations are all about controlling our lives. In March, a peer-reviewed paper by the American Institute of Biological Sciences titled “Social Norms and Global Environmental Challenges” was published in their annual journal BioScience. “Substantial numbers of people will have to alter their existing behaviors to address this new class of global environmental problems.”


Too many governments around the world, our own and particularly those in Europe, have passed all manner of laws and invested billions in “green energy” projects, only to discover they are a huge waste and that ordinary people have other ideas regarding the technologies that actually do enhance and improve their lives.


Greens are relentless liars and their lies appear daily in our print and broadcast media. Reality, though, is impacting their efforts. Facts are stubborn things.


Greens are far less interested in the environment than they are in imposing restrictions on the use of energy and the general welfare of humanity. It is pure fascism and always was.

On the morning of April 11th we had light sleet here in the DFW area... We had freezing temps the night before... Globull warming, that is all it is GloBULL CRAP...

Like all Leftist reactionaries the Greens are flamming hypocrites - the capital city of the Northwest and headquarters for numerous Leftist organizations, Seattle - seems to have a building crane on every street corner in the downtown.

Why just think of all the dirty "carbon" energy required by this building boom!

I guess it's okay for the Leftist Environmentalist Wackos to have shiny new headquarters, apartments and shopping malls in Seattle, while the rest of the Northwest suffers from record unemployment because they have shut down the timber industry.

...and the Northwest Left wonders why Boeing is moving to business friendly South Carolina.

Publication of the new science standards for schools that now include AGW and the advocacy of the NCSE for AGW show it will be going strong for many more years. Do not kid yourself.

Yes, you are right. It will take a good while longer before global warming no longer is foisted on hapless children and the public.

Thank you Alan, for the work you do...

The eco-green ideology uses reason and argument more than it comes from reason and argument. The acolytes of Gore and Suzuki shriek that the seas are rough but refuse to help us sail the ship to any identifiable port. Why? Because a) they don't know how to sail, being passengers in first class fellows, and b) few, including their comrades-in-arms, would want to go to the port their ideology directs them.

It is not for lack of intelligence that the Left embraces Environmentalism but lack of Purpose.

Having no "God" in the traditional sense, they find meaning in life by worshipping "Mother Earth" and are busy about converting the heathen, facts be damned.

They are true believers whose faith is backed by a false science, endorsed and promulgated by nearly every government on the face of Earth and whose tenets are unfalsifiable (climate warming = climate change = climate disruption).

The train ain't comin' off the tracks yet.

You are correct of course, but fascism has a habit of sneaking in the door way. When this warming hoax is finally buried the questions we must pose are of the scientific establishment, the media & the links between them. How did this movement become so all pervasive and what must be done to ensure that it does not happen again. Otherwise ocean acidification will be the next global problem, and then there will be another. Our leading scientific establishments, the Royal societies of the world must also be looked into indeed the nature of the scientific method to become co-opted by a bunch of eco-terrorist type people hell bent on a false belief that we must live in "balance" with nature. Nature tries to kill us every day people, there is no balance, there is only advancement.

Mike, there is much truth in what you say.