Is the Dam of Lies About to Burst? 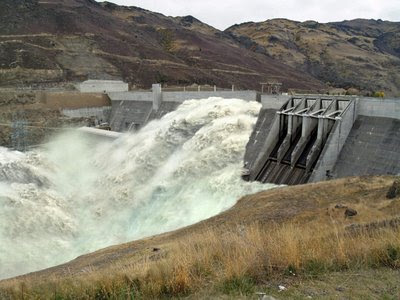 
Usually there are signs a dam is about to burst. Tiny cracks show up, the structure makes strange noises, and then, whoosh! That’s what we are witnessing as the President, the former Secretary of State, and the Attorney General struggle to keep the bulwark of lies and half-truths they have built intact. It is showing signs of collapse.


Liberals say absurd things all the time—mostly because they either don’t know the facts or because they prefer to ignore or obfuscate them. The current example is the shout-it-from-the-rooftops claim that Republicans are “politicizing” the events in Benghazi that left a U.S. ambassador and three security personnel dead.
In the wake of the House hearings on May 8th, the most elemental politics is at work within the White House and that is the decision to abandon Hillary Clinton. The decision to appoint her Secretary of State was political and, since the President sets foreign policy, it kept her wing of the party in the tent while affording the White House the opportunity to keep her conveniently on the road and largely out of the spotlight.


Consider the meltdown of influence the United States has had in the Middle East where the single act of a Tunisian peddler who committed suicide as a response to the harassment of the police set off a revolution that drove its dictator from office and then spread rapidly to Libya where Gaddafi was killed and to Egypt where its dictator (and ally of the U.S.) was driven from office with the President’s blessing. And, for two years, the U.S. has stood on the sidelines and watched as the Syrian dictator has slaughtered 70,000 Syrians, driving some 2.5 million to flee to Turkey and Jordan.


It has taken eight months since the September 11, 2012 attack on the Benghazi consulate and a House committee hearing to learn the truth as to why repeated requests for increased security assets were denied in a nation that is still essentially a war zone between the north and the south. We still do not know who told available forces to stand down. The President and his regime call this “politicizing.”


Beyond Benghazi, every decision the President makes or chooses not to make has political implications. The choice to go to bed the night of the attack and then fly to a fundraiser the following day was political. As Commander-in-Chief he had responsibility to issue the orders to protect his diplomats—our diplomats—but he is also the Great Delegator and, as the noose tightens around Hillary, she is very expendable.


It’s a political decision to exploit the murders in a Connecticut elementary school to attack the Second Amendment and gun ownership. The response of ordinary people was to go out and buy a gun. Indeed, fear of the White House’s intentions has made the President the greatest gun salesman in the nation.


Even in the Obama Justice Department there is the odor of deception that still reeks from the bungled gun-running program called “Fast and Furious” which allowed guns purchased In the U.S. to be transferred to various Mexican drug cartels. The result, in one case, was a dead U.S. Border Patrol officer, an ICE agent, and an unknown number of Mexican cartel victims. It took a presidential executive order to throw a blanket of silence over the role of the Justice Department in this lethal debacle. That’s political.


Now we learn that the Justice Department obtained Associated Press phone records in a probe to discover the source of a leaked story. AP officials called it a “massive and unprecedented intrusion” into how a news organization gathers news. The ever-reliable, politically-correct, liberally oriented AP has become a crack in the dam.


The revelation that the Internal Revenue Service “targeted” the Tea Party, patriotic, and pro-Israel groups for special attention regarding their tax status now adds to a growing sense of a regime without any internal limits on its exercise of power.


The result is a period in which the barely concealed scorn of the President, his wife, and those around him in appointed and elected office has half the population outraged while the other half is content to live parasitically, not paying taxes, and receiving an amazing array of benefits which a bankrupt nation cannot afford.


When enough people—citizens, voters, taxpayers—think they are being lied to and betrayed by those in high office, the dam of lies will begin to show signs of bursting under the pressure of their pent up anger.

It's as close as it will ever get... If it doesn't, then the hold Obama and Company have on this nation, the people and the press truly is as bad, if not worse than that which was the domination of Communist Russia and China and NAZI Germany..

I think I hear thunder, could he be from his "reign" of terror? Alan will be my Guest this Thursday 405 PM EDST
WWW.CRNTALK.COM

Unfortunately I believe the country is so divided it will just be made out to be "just another bit of partisan bickering". We are in big trouble.

Let him sacrifice Hillary as that will be good for the country....one down, many to follow. He is now in this so deep that Hillary 's sacrifice will not save him if justice prevails.

It's not just the takers who are the problem, but there are way too many working people who still don't get it. I was talking to someone today who is in a very technical field and she still likes Obama. It has come to the point where I am not sure what it will take to awaken such a person. Unfortunately, there are millions like her.

I don't think they'll impeach Obama. He's safe, but his credibility will be hit. I wouldn't be surprised if Hillary Clinton is behind all these links so that he takes the blame for Benghazi and she smells like roses. It's all about 2016. One good thing though is that the GOP will probably win the Senate and retain the House in 2014.

I have been reading comments on CNN and Hufpo to gauge the Leftists thinking on this. Most support the president and feel this is all "trumped up" to make him look bad. They still believe the R's are hindering obama from "fixing" all our problems. Fred is correct that if the administration slithers through this we are no longer in deep doo doo we are fully buried by it. It will take a complete media jump ship from the dear leader and constant re-indoctrinating of the Leftist brain to ensure the truth fully comes out and people wake up.

At the end of the day, the Left will stand with their beloved Dear Leader, as they have nowhere else to go.

The upside is that only 10% of the population are hardcore Leftists - the rest are little more than a low I.Q. emotional mob who are useless parasites and play no role in events - and will abandon Dear Leader the day when the welfare checks end.

...and the checks will end before his term ends, because Dear Leader has almost killed the goose that lays the golden eggs - the U.S. economy.

I don't believe for a minute that President Obama or former Secretary Clinton will suffer politically from the Benghazi debacle. Surprise will be mine if they do. Read http://smallcraftadvisorychronicles.blogspot.com/