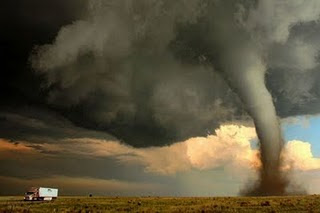 
After a tornado tore through Moore, Oklahoma in 1999, people returned and rebuilt their homes and other structures destroyed by it.


Many of the homes, instead of including a basement, were rebuilt on concrete slabs that offer no protection when high winds tear them loose. The elementary school was believed to be strong enough to protect students, but it wasn’t. No lessons were learned from that tornado, although meteorological systems have been put in place to provide some warning.


I did not have to wait for the usual pronouncements from various environmental organizations and individual “experts” that the tornadoes that struck Oklahoma were the result of “global warming” or “climate change”, but tornadoes are a product of weather systems all around the world and have occurred for the millennia of Earth’s existence.


Typical of the way Greens exploit every dramatic weather event, Solon.com, a liberal website, posted an article by David Sirota repeating all the usual environmental lies. “Was the severe weather system culminating in yesterday’s Oklahoma City intensified—or even created—by climate change? That question will almost certainly be batted back and forth in the media over the next few days. After all, there is plenty of scientific evidence that climate change intensifies weather in general, but there remain legitimate questions about how—and even if—it intensifies tornadoes in specific.” This is the worst kind of balderdash; utterly without merit.


Sirota then went on to blame “sequestration” for increasing the impact, citing “an 8.2 percent cut to the National Weather Service”, claiming falsely that there was no way it “could maintain around-the-clock operations at its 122 forecasting offices” and saying it means that its employees “are going to be overworked, they’re going to be tired, they’re going to miss warnings.”


This is the naked politicization of a human tragedy. Sequestration had nothing more to do with the deaths of some twenty children in Moore than the insane killing of children at Sandy Hook school in Connecticut that led to immediate calls for more gun control laws. This is typical of liberals for whom everything is about politics and power.


Sequestration, an idea put forth by President Obama and adopted by Congress as a process so idiotic and drastic that it was believed it would never be allowed to occur. It cuts the rate of federal spending, but not the amount of spending. As with the air controllers and meat inspectors, there have not been, nor will be, massive government employee layoffs. As Sen. Rand Paul (R-KY) points out, one result was the curtailment of White House tours, but shortly after it was initiated, the Obama administration was still able to find millions to send to Egypt on top of the two billion it sends annually.


The government has responded to tornadoes and other weather-related events with an alphabet soup of agencies, from NASA and NOAA to FEMA. The National Weather Service (NWS) does its best to track and warn against tornadoes. According to Tuesday's The Wall Street Journal, “The National Weather Service estimates that 80% of tornadoes are ‘weak’—EF1 or less—and less than 1% are violent, meaning EF5 or higher.” Such tornadoes are rare. “If the storm is upgraded, it would be only the 59th EF5 since 1950—and the second in Moore…”


On a page from NOAA’s National Severe Storms Laboratory offering “Tornado Basics”, it asks and answers the question “How do tornadoes form?” It answers by saying “The truth is that we don’t fully understand. The most destructive and deadly tornadoes occur from supercells, which are rotating thunderstorms with a well-defined radar circulation call a mesocyclone.”


Greens love computer models to justify their absurd claims, but the Severe Storms Laboratory says that tornado development “is related to the temperature differences across the edge of downdraft air wrapping around the mesocyclone. Mathematical modeling studies of tornado formation also indicate that it can happen without such temperature patterns, and, in fact, very little temperature variation was observed near some of the most destructive tornadoes in history.” Computer modeling is a poor substitute for Mother Nature.


What is known is that about 1,200 tornadoes annually and they generally occur in a stretch of the Midwest known as “tornado alley.” The worst of them do tremendous physical damage and kill people; which begs the question of why people moved back to Moore and rebuilt despite the 1999 tornado.


The real question is why people believe that humans have anything to do with the weather or the climate? Why does anyone believe that carbon dioxide (CO2) has anything to do with weather events or trends? The answer is that Al Gore, James Hansen, and a raft of other climate charlatans, along with countless Green organizations, have been lying to Americans and others around the world.


Since founding The National Anxiety Center in 1990 as a clearinghouse for information about Green fear-mongering, I have been a guest on countless radio shows. I tell listeners that Mother Nature has a message for mankind. It is “Get out of the way. Here comes a tornado, a flood, a hurricane, a blizzard, a wild fire.”


After the dead are totaled and a cost is estimated, there will still be tornadoes in Oklahoma and the rest of tornado alley. The primary lesson to be learned is that Mother Nature is infinitely more powerful than anything humans are alleged to do to affect it in any way because we have zero effect on it.


The other lesson is that America and other nations have wasted billions of dollars on idiotic “renewable energy” such as solar and wind projects that provide unreliable, costly alternatives to the energy on which a nation’s prosperity depends.


The opposition to “fossil fuels” and nuclear energy that Green organizations generate is an attack on human activity, along with their opposition to beneficial chemicals that can, for example, eliminate malaria and other diseases that afflict mankind demonstrates their core belief that it is humans that are responsible for harming the Earth. They are not.

To be Green is to seek to control and reduce humankind through an extensive matrix of lies.


Tornadoes are a “force majeure.” As Wikipedia explains, is “a common clause in contracts that essentially frees both parties from liability or obligation when an extraordinary event or circumstance beyond the control of the parties, such as war, strike, riot, crime, or an event described by the legal term, ‘act of God.”

Thanks for the good article, Alan.

The liberals perpetuate the renewable energy nonsense, whilst at the same time promoting both the sterilization of agricultural soil using inorganic chemicals, and the development of "genetically altered crops".

As you've rightly said, it is lust for power & control that is their root motive.

One small point, Alan, about basements. I am familiar with that area, and have friends there, and many homes in southern OKC do not have basements because of the soil and high water table. It is very difficult and expensive to try and install a basement that does not leak (among other problems). Saferooms are much less expensive, and many houses are being retrofitted with them as part of remodeling. However saferooms were not that readily available in 1999-2000 like they are now.