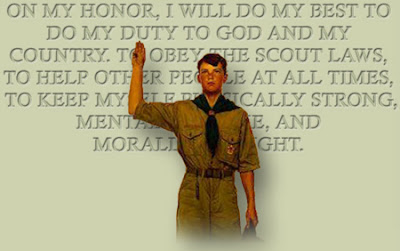 
One of the goals of Communism is to “Present Homosexuality, degeneracy, and promiscuity as "normal, natural, and healthy".


It comes as no surprise that, during a CBS interview in February, President Obama supported having the Boy Scouts of America open its membership to gays and, presumably, those who lead scout troops as well. “My attitude, the President said “is that gays and lesbians should have access and opportunity the same way everybody else does, in every institution and walk of life.” Spoken like a good Communist hiding the true intent of debasing the cultural and moral life of America.


It is worth revisiting the Scout Oath: On my honor I will do my best to do my duty to God and my country and to obey the Scout Law; to help other people at all times; to keep myself physical strong, mentally awake, and morally straight.” The Scout Law is “A Scout is trustworthy, loyal, helpful, friendly, courteous, kind, obedient, cheerful, thrifty, brave, clean, and reverent.”


These are attitudes and beliefs that have served generations of Scouts through life, inspiring them to maintain values that we admire in anyone and which benefit society. 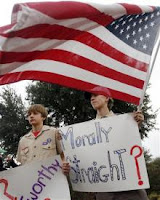 On May 23rd, the BSA board of directors will vote on whether to change its policies to allow openly homosexual scouts as members and/or gay scout leaders. A survey of its members released in early May demonstrated that a majority support keeping the current, longtime policy of exclusion in place, prohibiting homosexuals from joining or leading the organization. Fully 61% favored keeping the current policy while 34% opposed it.


There is a compelling reason, beyond the cultural and moral issues involved. According to the Centers for Disease Control “gay, bisexual, and other men who have sex with men (MSM) represent approximately 2% of the population, yet are the population most severely affected by HIV”, the virus that causes AIDS. “In 2010, MSM accounted for 63% of all new HIV infections.”


The Boy Scouts are one of the largest youth organizations in the nation with 2.7 million youth members and more than a million adult volunteers. Since its founding in 1910 as part of the international scouting movement, more than 110 million Americans have been members of the BSA.

Its goals, as the Scout Oath reveals, is to train young men in citizenship, to develop worthy character traits, as well as self-reliance through participation in a wide range of outdoor activities, educational programs, and, for older scouts, career-oriented programs in partnership with community organizations. Cub Scouting is open to boys ages 7 to 10½ years, Boy Scouting for boys ages 10½ to 18 and Venturing for young men and women ages 14 through 21. It also offers Learning for Live that provides in-school and career education. Units are led entirely by volunteers.


The BSA holds a Congressional charter under Title 36 of the United States Code making it among a very small number of other patriotic and national organizations that are similarly chartered. Among them are the Girl Scouts of America, the American Legion, and the American Red Cross.


As attacks mounted against the BSA, the Supreme Court in 2000 ruled in Boy Scouts of America v. Dale that it and all other private organizations are constitutionally protected under the First Amendment of freedom of association to set membership standards. In 2004, the BSA issued a statement that “Boy Scouts of America believes that homosexual conduct is inconsistent with the obligations of the Scout Oath and Scout law to be morally straight and clean in thought, word and deed.”


The attacks on the Boy Scouts of America represent the many efforts by progressives to undermine the essential values of the nation and a review of Communist goals reveals the success in part that they are having. Many Americans believe the nation is threatened by moral decline and there is ample evidence to support that belief.


It is my hope that on May 23rd, the BSA board of directors will reject the inclusion of homosexuals as members and volunteer scout leaders. If it does not, many parents will not permit their young male children to join, nor should they.

"If it does not, many parents will not permit their young male children to join, nor should they." Yes, that will happen and many of those already in the Boy Scouts will leave. Obama is corrupting every institution possible.

I have no personal issues of gays or lesbians. However, I WOULD NEVER allow my son to join the boyscouts and have an openly gay (or closeted gay, if I found out) boyscout master. I am sure I would not be the only one who would pull my kid out of that troop and find another one and it one did not exist nearby, then leave altogether. I would NEVER trust a gay scoutmaster on a week long camping trip with my kids. Why would I take the chance.


Most male on male pedophiles are gay. So the chance of my son being molested by a male adult is GREATLY increased if the person he is alone with is a gay man.

Just as I am sure that those that scream loud at my decision, I would bet them a million dollars they would never have sex with a women with aids. But I would tell them, use a condom...that will greatly lower your chance of getting aids...so you better get in there mister or you will be labeled as a person who hate people with aids. I don't care about your increased chance of something bad happening to you...you have to think about the feelings of that woman that wants to sex you up...even if she has aids.

Well, just like no man wants to play around with the very great risk of catching aids, neither does a parent want to play around with a greater chance of their kid getting molested...all in the name of someone else who does not stick to the norms...FEELINGS.


Tell me I am wrong....give me the argument that parents will NOT withdraw their boys from the BSA if gays are allowed in.

Why can't the gay community just set up their OWN scouting organization? Do they have to force their way into EVERY facet of our lives?

I was a scout myself for many years, and served as an assistant scout master as well. The ONE thing we never had to worry about on the numerous weekend camp outs and hikes we went on was sexual misconduct. We were there to learn survival skills, and develop our friendships and leadership skills, and sexual relations with ANYONE were the furthest thing from our minds. If the gay community succeeds in integrating openly homosexual men and boys into the Boy Scouts, THAT will almost certainly change. There are some things that just need to be kept out of Scouts, and in my opinion, sexuality, gay or straight, is one of them. There will be plenty of time for kids to explore their sexuality later ...

I'd hate to do it, because Scouts was one of the greatest experiences of my youth, but if this happens, I'd pull my kids out of that organization so fast it would make heads spin ...

There have been lawsuits against the BSA for cases of molestation and yet the liberals are trying to force them to accept openly gay scoutmasters.This is a bonanza for pedophiles who want a free ride. It is a no-win situation for the BSA.

You are absolutely right, Alan; it's a way to destroy a decent organization, one that promotes traditional American values.

Mr Caruba, I pay that the BSA will take the right decision, thats not to allow those sick mentally desturbed group to join the BSA. The last time I read my Bible it still says that these people who are homosexual, are a disgrace to God.

Most child molesters are heterosexual and usually a member of the child's family. Your ignorance is exceeded only by your arrogance. Perpetuating this sort of fallacy only serves to keep our children at risk.

Rachiel, there is not one word written in my commentary about child molesters. Moreover, the BSA has gone to great lengths to ensure that no scout master has any suggestion of this before accepting them to serve.